Remembering LudoBites With Mind of a Chef and Ludo Lefebvre 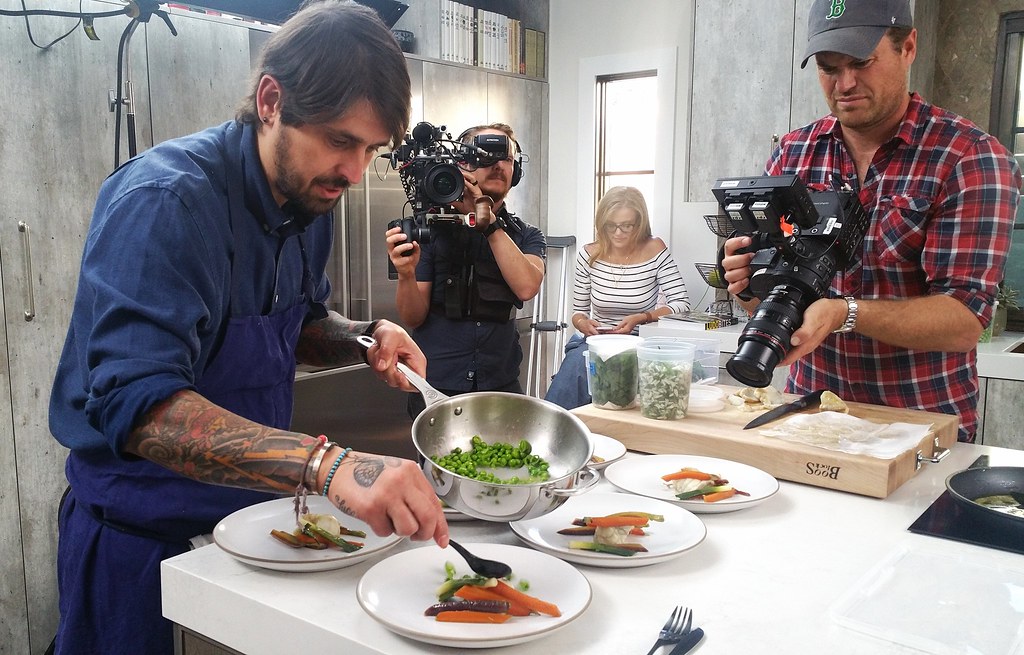 Shooting with Ludo, Krissy & Mind of a Chef Crew[/caption] When you get approached to reminisce about a certain time and place, nay, a certain chef and his concept - on-camera - you know you’ve been hit with something very special. In the present age of reality TV, of course, you might have suspicions it could be exploitive, but then you know the show. And multi-Emmy-award-winning Mind of a Chef just so happens to be one of your favorite shows on cooking and the culture of food. Furthermore, when you hear that the particular episode you’re asked to be a part is about LudoBites, and you’ll get to experience Ludo recreating a few dishes right in his own brand new kitchen. you know that it’s going to be good. There’s just so much to unpack, there. [caption width=“1024” align=“aligncenter”] 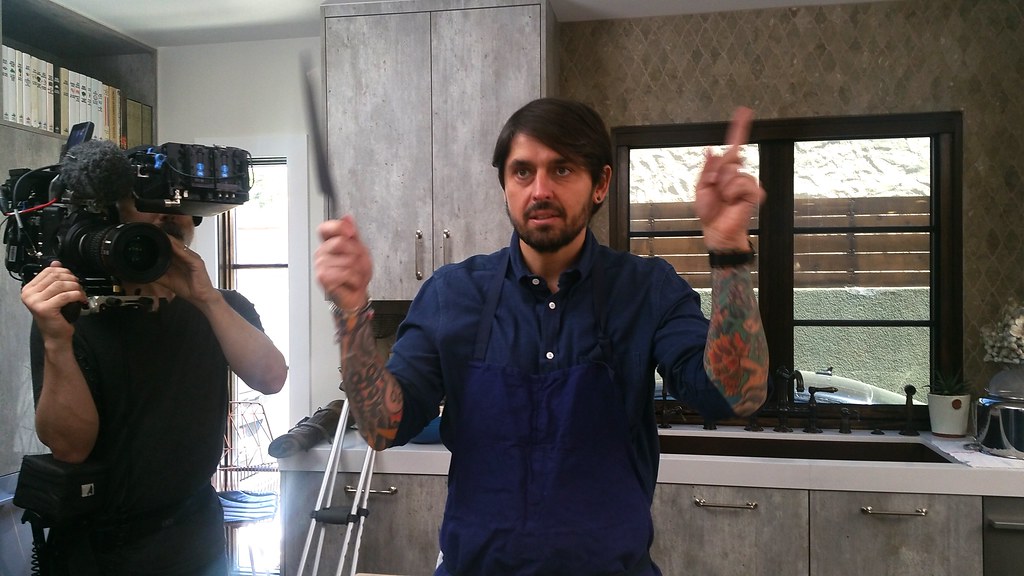 Announcing Ludo as host of Mind of a Chef Season 5[/caption] And unpack it, we did - in conversation over a four-course cooking demo for the episode. But not before announcing over our social media channels that Ludo will be the star of 8 episodes of Mind of a Chef, Season 5 (set to air late Fall, 2016). When we got to the cooking, though, it was hard not to get nostalgic along with Jo Stougaard (My Last Bite and MoonBeach Diary), Josh Lurie (FoodGPS), Diana Hossfeld (Diana Takes a Bite), William Chi (Food Digger) and Kevin Eats (Kevin Eats), who also got asked to be a part of the episode. [caption width=“1024” align=“alignright”] 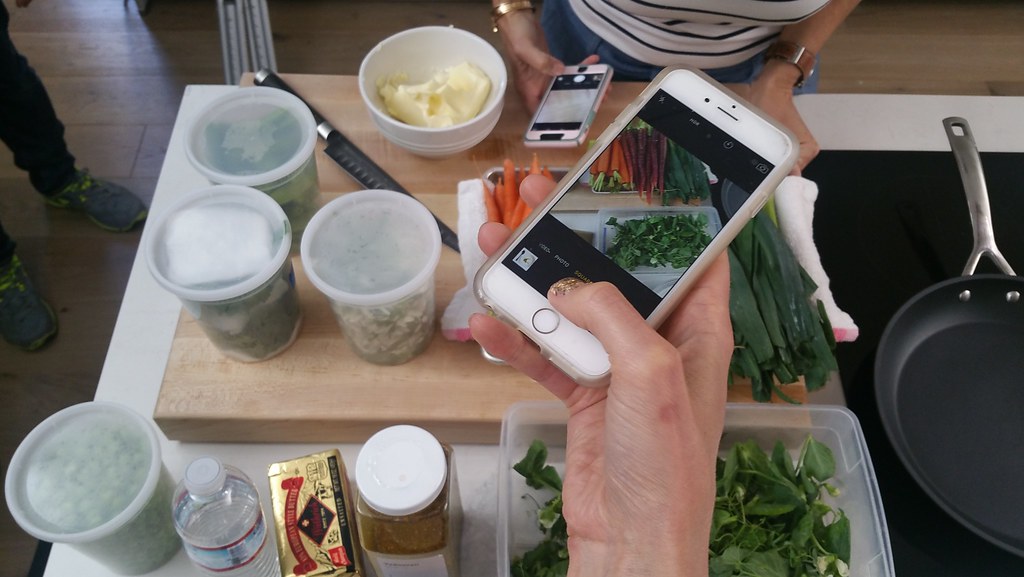 Ludo cooks poached monkfish, jardiniere de legumes, vadouvan[/caption] After all, my blog - where I began to cut my writing teeth - was but three or so years old when LudoBites started. In all our bloggity blogsome glory, I was just one of many food geeks who converged from different corners of the internet (thank you, Al Gore). Some had a WordPress blog (*ahem*), some had a Blogspot blog, some were Chowhound forum groupies, and others were these people called the Yelp! Elite; many stood at the intersection of two or more circles in the Venn diagram. Whatever it was, it was happening through blog posts and Twitter, making our sprawling city that much smaller with community; think the era of Jon Favreau’s acclaimed movie, Chef. We barely remembered to bother with names - it would be our Twitter handles as introductions, first. [caption width=“1024” align=“alignleft”] 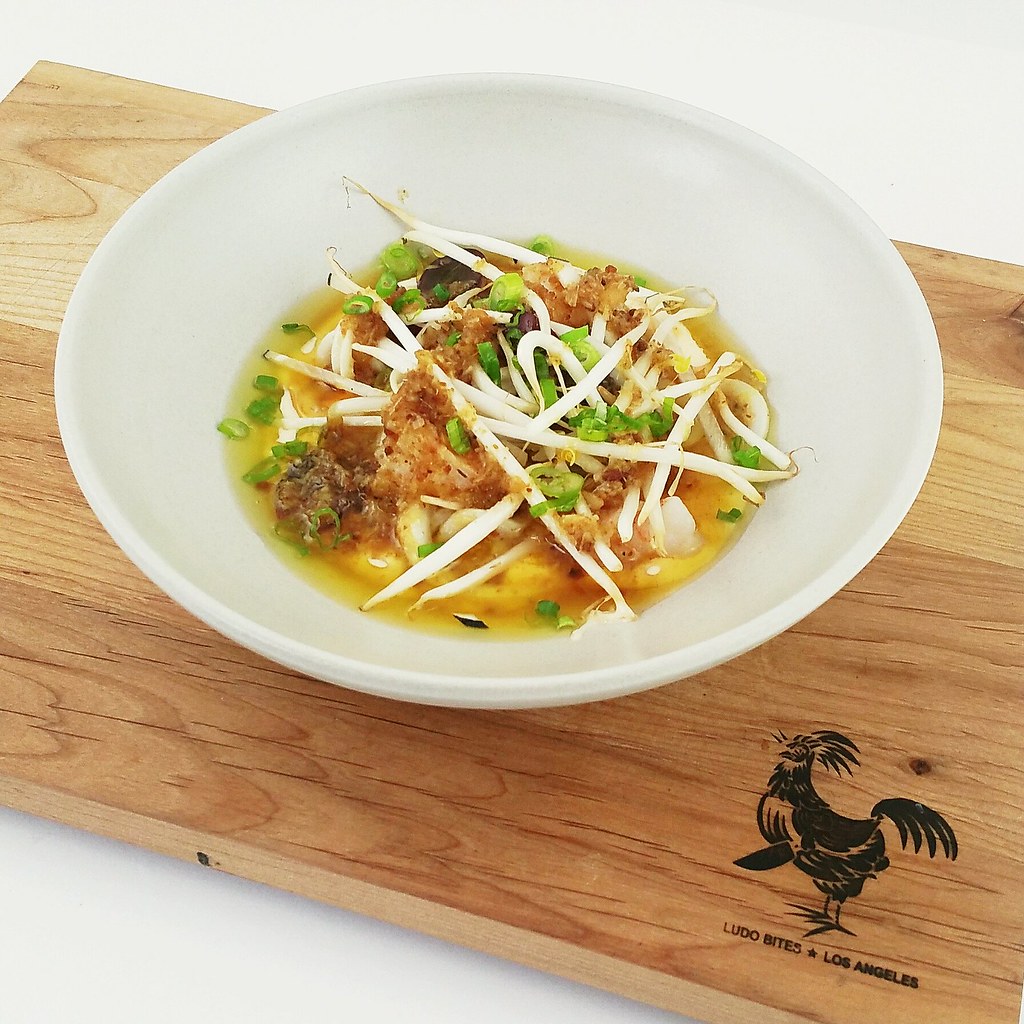 Squid Pad Thai from LudoBites[/caption] I had been to LudoBites 2.0 through 10.0 - with the exception of 9.0, which took place in Hawaii. Blogging and tweeting - both of which were still on the upshot of becoming legitimate mediums - are credited for much of its success, even propelling the concept into its own Sundance series. When is the next LudoBites going to happen and where? We all stood by Twitter to find out. After dining, we posted photos from our Canon SD series point-and-shoot cameras of the dishes as soon as we could get home to blog the experience (Twitter hadn’t even added photos until 2011 in order to keep up with then iPhone-only Instagram, until after at least LudoBites 5.0). Krissy was also using Twitter to fill in reservations that had been cancelled on. [caption width=“1024” align=“alignright”][](https://www.instagram.com/p/BEkcA6jimLp/)Caviar Panna Cotta[/caption] Many traditional restaurants were still warming up - or outright resistant - to the ever rampant photo taking culture, to the instant reviews or opinions posted by your Average Joe online. Official restaurant critics had to visit a restaurant three times before his/her review and still do, but they were slower going about that back then. Ludo, however, was a L’Orangerie and Bastide alum, who quit fine dining to cook particularly experimental dishes in rotating locations for an evolving Los Angeles dining audience. We were learning to love food that pushed the boundaries, ate that food delivered through an uneven service model in a casual environment, but were charged reasonable amounts for it with dollars earned after the economic collapse of 2008. I could feel the collective shift in our priorities to the simple pleasures, the simple things in life - that is, the food we ate. LudoBites was the best bang for our buck when you wanted a sense of adventure for your palate in our LA economy. Yes, only in Los Angeles could this happen; rents would be too expensive to fail in any other metropolis. [caption width=“1024” align=“aligncenter”] 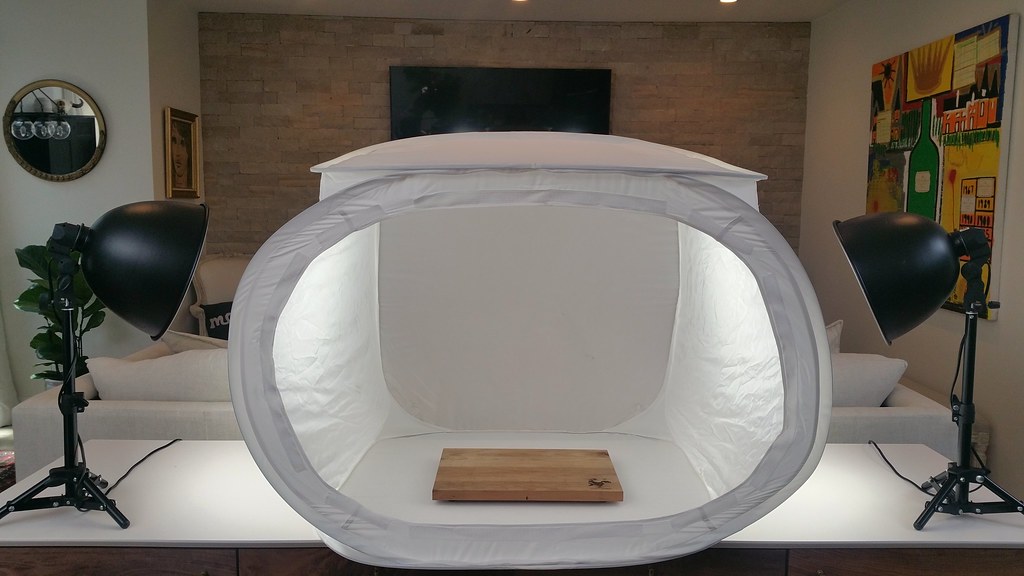 LudoBites Light Box[/caption] Ludo and Krissy realized the power of bloggers and embraced us back, with Krissy even creating a light box set-up to facilitate the creation of fantastic pictures for these blog posts. I myself was just learning both how much I really loved to write and how much I really loved this city through writing about food. But it didn’t hurt that recognition from blogging came in the form of increased Twitter followers and more invites for media dinners in my Inbox. I was elated to find out that my idol, Jonathan Gold, knew I existed. The Los Angeles food community really hit a turning point during these years, even if every other city still continued to dismiss our entire dining scene. (Instagram? When it arrived on Android, that would unleash yet another monster. Don’t get me started on Snapchat. I’m a little late on that one, but I’m trying.) [caption width=“1024” align=“aligncenter”] 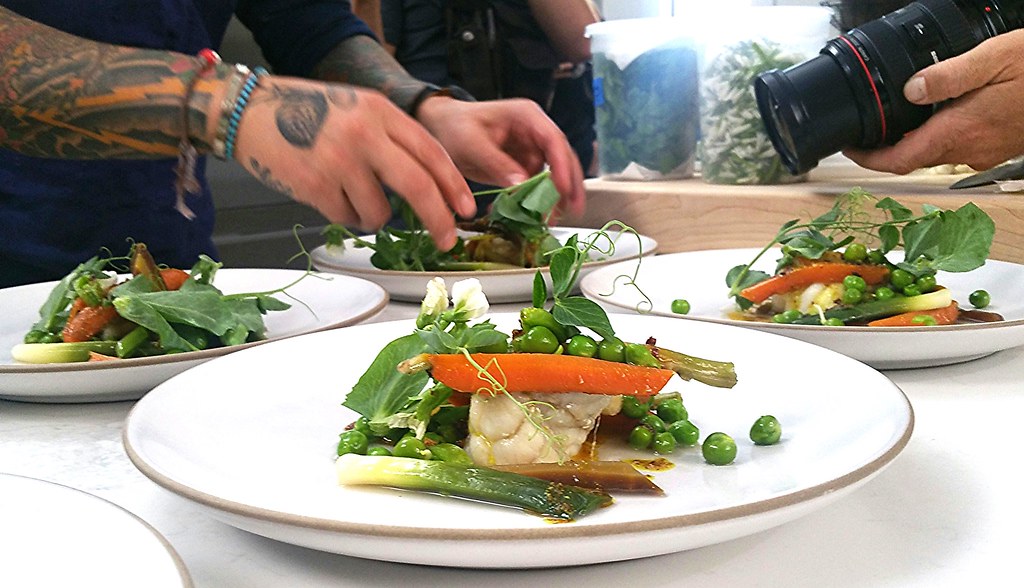 Poached monkfish, Jardiniere de Legumes, Vadouvan - Ludo introduced the spice Stateside through LudoBites[/caption] The rest is history. Though they never named it a “pop-up,” their roving dinner party was festooned with the name and they are credited for popularizing the concept. Now, a pop-up can be found everywhere you look - whether for food, clothing, or retail. To have witnessed the popularization of it was an honor. Ludo has been on TV a billion times since, and luckily Angelenos have no shortage of places to have his food. There’s now Trois Mec, Petit Trois, Trois Familia, and a second installment of Petit Trois that will be coming to the Valley (the latter was another announcement we made during the shoot). [caption width=“700” align=“alignright”] 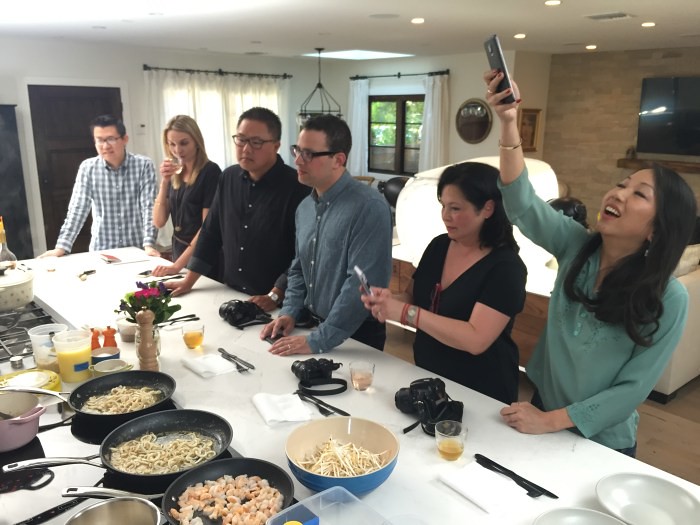 Reminiscing about LudoBites - credit: mindofachef.com live blog[/caption] For me: More and more, then less, blogging. Always Tweeting. And more than ever, Instagramming, as well as freelance writing for online food publications, while still constantly interchanging “blogger” and “writer” descriptors for myself. The truth is, I started out as a blogger and I will always be a blogger - this blog even passed the 10 year mark awhile back! I never went to journalism school, and it was through networking, workshops, more writing, and trial and error that I stumbled upon this career in one of the most interesting, most underestimated cities in the world. I’m so honored to have been here from this vantage point, always learning, always tasting, and doing my best to document what I can. I can’t wait to see what’s next for us. Thanks for following along. (Don’t forget me on Twitter and Instagram.) Also: Shout out to my girl Laurel, who passed along some great on-camera beauty tools and tricks!

Mind of a Chef

Live Blog from our afternoon