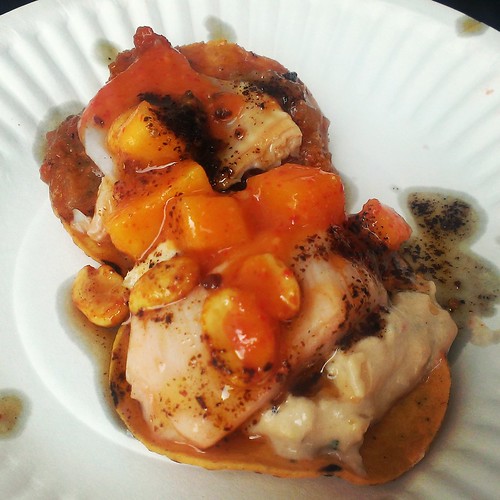 Sabina’s sea urchin & clam, smoked fish pate and scallop tostadas from La Guerrerense[/caption] The food festival circuit is a doozy, these days. And with how exhausting each event is, it’s easy to fatigue early on. There’s dealing with the line wait in front of the popular stands, but there’s also the prioritizing that goes on to ensure you’re getting the good stuff before you get full. The sold-out Tacolandia stood to be no different. At Tacolandia, the stands helmed by chefs who came up from Baja, Mexico are the ones I made sure not to miss. La Guerrerense served up my two favorite bites of the day, including a tostada lined with sea urchin and topped with clam, and another topped with smoked yellowtail pate and raw scallop. Extra complimentary were the salsas, giving them a subtly smoky flavor. They would’ve also been hot, except they got switched with Fiona’s mild ones, which actually made her cry (oops). Tacos Kokopelli’s octopus tostada also cut a pretty fantastic flavor. Javier Plascencia’s Mision 19 represented with cow udder and tripe tacos, with a spaghetti topping that was reminiscent of his Italian restaurant down in Tijuana. So tasty. In the vegetarian corner, I was pretty impressed with Sol’s goat cheese taco, complete with peanuts, cilantro and hot sauce, which made for an awesome, untraditional combination of spicy-sweet goodness. Guerilla Tacos presented a delicious sweet potato taco with celery root; I’m eager to try more of their other tacos at their Handsome Roaster pop-up. At Laurent Quenioux’s stand, he was alternating delicacies between bone marrow, rabbit liver, escamoles and foie gras in his tacos. I went with the banned foie and didn’t regret a moment of it. I miss foie, guys. Of course, I had to try local favorites Tacos Leo, which served an al pastor-pineapple taco, and Mariscos Jalisco, with their famed fried shrimp taco. Neither disappointed. It’s easy to get sidetracked at Tacolandia, or any food festival for that matter, and become full before you get to the essentials. I’m super lucky to have been to Baja a handful of times with Bill, so the research served me well between trips to the VIP/21+ drinking section. Arrive early and don’t get discouraged by the line - chances are, it’s probably worth it. Come prepared with the knowledge, eat, drink and leave. The nap afterwards is just gravy. See you at Tacolandia 2014!