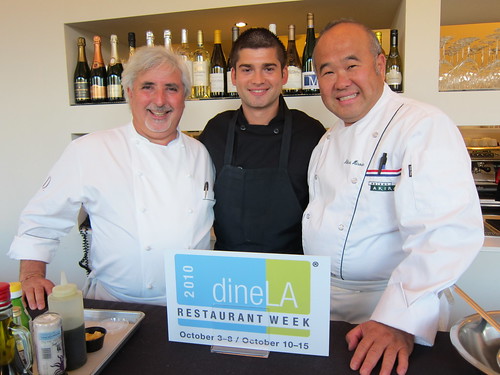 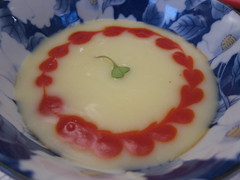 [/caption] The challenge was cold soup, and it was a contest of the Italian and French schools of culinary arts. Fifteen minutes were allowed and the “surprise” ingredient was Alverta President caviar - a premier, new American strain of caviar. Chef Akira Hirose prepared a potato leek soup that had much of its treasures buried at the bottom. We, the judges, were instructed to go to the bottom to scoop up the essence of everything that was in the cold soup. And, so we did. The salmon was perfectly smoked, the yuzuÂ packed a refreshing citrus punch, the hazelnut and potato leek carried weight, and the thick soup had great complexities overall. The piquillo pepper that dotted the soup was a nice touch, spicing up the soup a tad. [caption id=“” align=“alignleft” width=“240” caption=“Gazpacho With Juice of Yellow & Red Heirloom Tomatoes, Cucumber Juice, Guacamole, Orange Zest, Yuzu Juice, Cucumber, Caviar, Croutons and Basil Oil”] 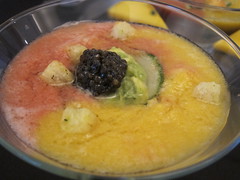 [/caption] Alas, it was then time to try Chef Celestino Drago’s creation. True to form, it was a cold gazpacho incorporating the juices of fresh, yellow and red heirloom tomatoes. Cucumber juice provided a bit of green color and rounded out the sweetness of the tomatoes. The juices enveloped a bit of guacamole - the weight in this soup - along with orange zest and yuzu in the martini glasses, which further brightened the concoction. Then came the caviar and diced cucumber. Basil oil was drizzled and croutons were floated atop the cold soup. Though this was not as unique as Chef Hirose’s soup, Chef Drago’s was the winner in my camp. I really enjoyed the flavors all the different juices - and even caviar - brought to the table, and while gazpacho is a common menu item in Italian menus, I thought this was a well-executed dish. But the beauty of having three judges is that if not unanimous, a winner would be determined by two, and I was ultimately outvoted by Chef Ben and Josh. They favored Chef Hirose’s cold potato leek because of its complexity. There was speculation that Celestino was outnumbered by those from the French camp. Me - I was content to be outnumbered and stood by my decision. I myself skewed toward the lighter soup since I prefer my cold dishes without a ton of weight, but also thoroughly enjoyed Chef Drago’s gazpacho. And so continues the Dine LA Quickfire Challenges… Stay tuned for today’s rendition: Cold Noodles. It also comes complete with sneak preview of Starry Kitchen Dine LA dishes for $5 a pop and an after-party at CASA.