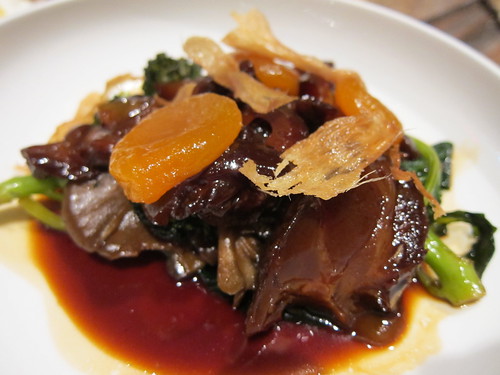 [/caption] It may be commonplace for a museum to have a gift shop and furthermore, a restaurant, available within its walls for the convenience of its guests. The quality of Ray’s and Stark Bar, however, serves to make it a viable rival as far as being a destination in itself. [caption id=“” align=“alignright” width=“240” caption=“Ray’s and Stark Bar at LACMA”] 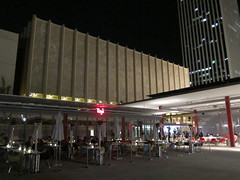 [/caption] Upon approach, the beautiful but complementary decor and setting of Ray’s and Stark Bar (so-named after the late film producer and former LACMA Trustee) expertly enable the restaurant and bar to blend in with its surroundings on the museum’s middle patio. But nothing about it dwindles in comparison to even the largest campus of the largest art museum in the western United States. Certainly not the food menu, curated by Kris Morningstar (District), and certainly not the cocktail selection - which currently runs 25 deep - by Michel Dozois (Neve Ice). The treats are just as savory as what you’ve found on Chef Morningstar’s menus past - thank god - and at first taste during a media cocktail party, just as delicious. The charcuterie, pates, rillette and cheese are all top-notch. You’ll find your standard selections of meat but also a decent selection of rarer cheeses available to start your evening off on the right foot. [caption id=“” align=“alignleft” width=“240” caption=“Chile Relleno with Chorizo, Goat Cheese, Dates, Almond Sauce ($12)”] 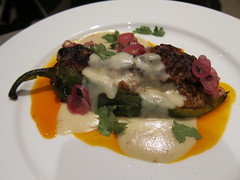 [/caption] The beef tendon - whether or not you’ve ever particularly been a fan of connective tissue - is a must-order as it stands one of the most tender meat dishes on the menu. The chile relleno, with its fillings of chorizo, goat cheese, dates and almond sauce, is such a uniquely rich rendition - it’s no wonder the (venison) version Kris left back at District is one of Alan Richman’s top five eats of 2010 in GQ Mag. This is also an essential item in your visit. The flatbreads are no slouch, either, thanks to their wood-fired oven and apricot wood upon which they are cooked and browned. The pie crusts bubble up around the edges and are finished off with that charred crisp only an oven like that can achieve. The combination of toppings are simple (tomato and oregano)Â inspirational (truffle cheese, fontina, mushrooms)Â or plain thematic (goat shoulder and goat cheese). Truth be told, though, the real danger is letting these fill you up and thereby preventing you from exploring the rarer treats on the menu. Even their burrata is given a not-so-typical treatment with delicious, savory olive oil and tapenade. [caption id=“” align=“alignleft” width=“240” caption=“Burrata with Tapenade”] 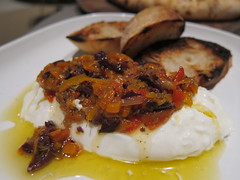 [/caption] FeelingÂ the beef tendon was too tame?Â Try the blood sausage, which comes dressed in pea tendrils and pickled cippolini onions. Or, you can order the crispy, fried head cheese as another savory treat. The mustardy, tangyÂ carrot piccalilli that accompanies it gives the plate a good kick.Â  And if you’re in the mood for a French classic, theÂ Croque Madame, with itsÂ sunny side up egg on top,Â is cooked to perfection in all its rich glory. You’re best sharing one of these sandwiches unless this eye of the egg is what you particularly crave. [caption id=“” align=“alignright” width=“240” caption=“Dr. Blinker | Rye, freshly squeezed grapefruit juice, raspberry syrup ($11)”] 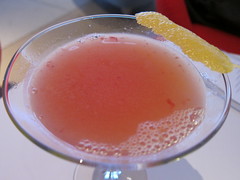 [/caption] And the cocktails…oh, the delicious cocktails. Michel Dozois, whoseÂ cocktails headline Ray’s and Stark Bar and whose Neve Ice keeps said cocktails chilled, said he was given the task of coming up with 100 cocktails yet was able to convince the higher-ups to allow himÂ whittle it down to 25. You will find yourself paging through that still-large selection not able to quite make up your mind and even quite possibly throwing up your hands. No worries, because Michel will be happy to help you discover the cocktail exactly to your liking. It’s not that the recipes are complicated; to the contrary, they’re quite simple. But the selection of spirits, combined withÂ juicesÂ madeÂ in-house, make for some very vibrant cocktails. Even Smokey and the Bandit, which employs Laphroaig, made even the band-aid-ish Islay single malt taste refreshing. [caption id=“” align=“alignleft” width=“240” caption=“Morning Glory Fizz | Scotch, Absinth, egg white, freshly squeezed lemon juice, simple syrup ($10)”] 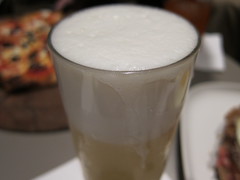 [/caption] If you’re looking for a light, airy treat, try the Morning Glory Fizz - with Scotch, Absinth, egg white, freshly squeezed lemon juice and simple syrup. And though I love rye, I wouldn’t have guessed I’d enjoy it with grapefruit juice as in Michel’s Dr. Blinker. If you’re looking for something sweet and spicy, try the Owl and Pussycat, made with rum, freshly squeezed lemon juice, simple syrup, chilis and cherries. Truth be told, there are really just so many cocktails and treats - not to mention mains - to try on this menu. I was just lucky to get a peek. In all, though, it was a great window into what promises to be an interesting and exciting place to explore all the corners of your palate. Art on this block has indeed transcended above and beyond to include the other senses, making the kitchen at Ray’s and Stark Bar an essential and rich (in multiple ways) LACMA experience. All food and cocktails were hosted.