Ramen Jinya Is Good For Your Ramen Fix 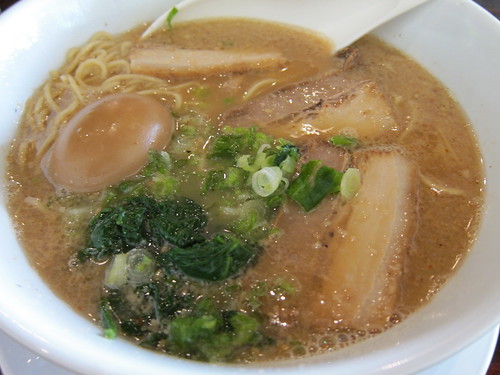 [/caption] I’ve had a lot of ramen. Truth be told, those bowls of ramen don’t come from very many places. My inaugural non-Top Ramen bowl was at Shin-sen-gumi in Arcadia, but my favorite isÂ (and the majority of those aforementioned bowls were from) Santouka with their Shio broth being the trump card to my ramen cravings. With those locations being San Gabriel and the Westside - and my new apartment being inÂ Hollywood proper with Torrance and GardenaÂ even further away - I became eager for other options. Ramen Jinya does a great job filling in. [caption id=“” align=“alignright” width=“240” caption=“Curry”] 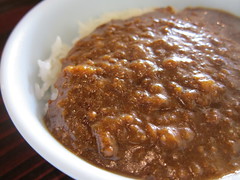 [/caption] Another confession: I have a bias against chicken broth ramen. Give me that chashu in all forms - fatty pork slices and fatty pork bone broth. So while Ramen Jinya is like Ramen California (so I have heard, haven’t tried) in offering chicken broth options, I just have a hard time making the leap. So Tonkatsu and Premium (bonito-infused)Â Tonkatsu ramen it is. With, perhaps, a side of curry. In retrospect, it’sÂ not the most complementary side you can order with ramen, butÂ I can always eat curry. For everyone else, I’d go with the gyoza. They’re bite size, but they’re good and have a proper crisp on the outside and a hot center. (Unfortunately, I was off form on my first visit and don’t have a picture.) As far as price point, you can get a salad, side and ramen combo for $13.50 and a bowl of ramen alone for $8.50. I’m not sure where my menma (bamboo shoots) were, and the egg was perhaps a little stale, but the broth was solid and less salty on my second visit than my first - a good thing. It could maybe use more body, though I did like the Premium broth better than the regular Tonkotsu.Â A bonus: You’ll find yourself scoopingÂ soup less since the spoons are so big.Â The noodles, though, are my favorite thing about Ramen Jinya, and house made from what I could tell. They have good bite yet are plump enough to keep you satisfied. Ramen Jinya is great for this South Bay-averse ramen lover. Who knows? Maybe one dayÂ I’ll be adventurous enough to try the chicken. According to a tweet of Mattatouille’s, however, I hear that the newly-openedÂ Robata Jinya on 3rd Street offers their restaurant family’s ramen - and I just so happen to work in Beverly Hills. Even better. Who can argue with accessible, good ramen?