P'tit Soleil Has The Poutine I've Been Waiting For 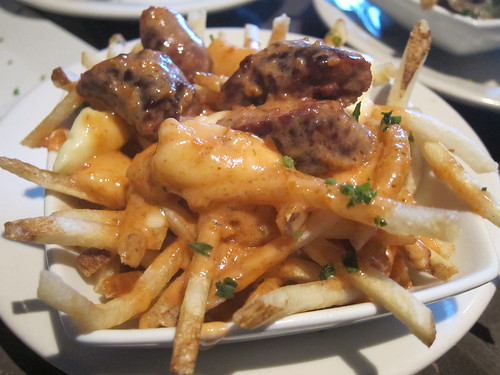 Poutine Malik: Merguez sausage, cheese curds & a creamy Harissa sauce[/caption] Poutine. It’s an import to Southern California, but you’d think it would’ve reached Universal Food Status by now…like cupcakes, burgers & frozen yogurt. After all, who doesn’t love gravy, cheese and fries? I can confirm that the combination of the three (or four - that is, with protein) is way better than the mere sum of its parts. [caption id=“” align=“alignleft” width=“240”] 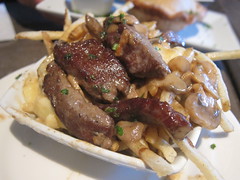 Poutine Marat[/caption] Then again, I hail from Wisconsin - and the frequency of my visits to Canada still outnumbers those to Mexico. So you can understand my Cheesehead’s frustration with the grated cheese application on fries everywhere in this city. Even at Animal. And Frysmith. (I still love both of you.) But this is not poutine. In fact, cheese curds exist as an actual ingredient even on its Wikipedia page. (I know! I just invoked the Wiki!) You may call it “gourmet poutine,” I just call it “done properly.” But perhaps I hold too much respect for the cheese curd. I can’t help it - nor can I contain my excitement that P’tit Soleil - across from Soleil, which has been a Westwood Blvd restaurant for 10 years - actually sources theirs from Carr Valley Cheese in LaValle, Wisconsin. Though curds are known for their squeak when fresh, these nuggets are expertly melted down from being laid atop just-out-of-the-fryer frites. Not too gooey to appreciate its original shape…softened enough to spread its love to the other frites in the Québécois haystack. It is the anti-steak fry, and it’s just the right size for a balanced ratio of potato to gravy and toppings. Melty morsels, not tiny slivers, are key in curds, I’m telling you! [caption id=“” align=“alignright” width=“240”] 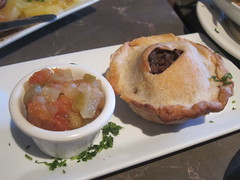 Meat Pie with Fruit Chutney[/caption] The Poutine Malik features a spicy Merguez sausage with creamy Harissa sauce to go with the potatoes and cheese curds. It’s pretty sublime. But so is the Poutine Christine, complete with a peppercorn sauce. For filet lovers, Poutine Maratpairs cuts with mushrooms, all topped by a tasty Cognac cream sauce. If you want mussels au gratin on your fries, look no further than the Poutine du Prince Edward. While I’d come here specifically for the poutine, I also would caution against overlooking some of their other dishes. The meat pie comes complete with a golden flaky and buttery crust encasing minced beef on all sides but also a helping of fruit chutney to add a little sweetness. If you want that Cognac cream sauce on shrimp instead of your fries, as in Poutine Marat, look no futher than the Crevette Heather.  As for desserts, Luc Alarie brings over Vachon small cakes. The Ah! Caramel! (chocolate covered cake with marshmallow and caramel fillings), Jos Louis(chocolate cream filled cake) and May West (chocolate covered yellow cake filled with custard) - along with creme brulee and strawberry profiteroles, of course - are just enough to satisfy your Quebecois sweet tooth. And while they offer cocktails at P’tit Soleil, I tended to stick with their decent bottled beer list (like the Anderson Valley Boont ESB). When it comes to poutine, that’s just what feels best. Of course, maybe the fact that this was my first media dinner back from Tales of the Cocktail had something to do with it… All food and drink were hosted.