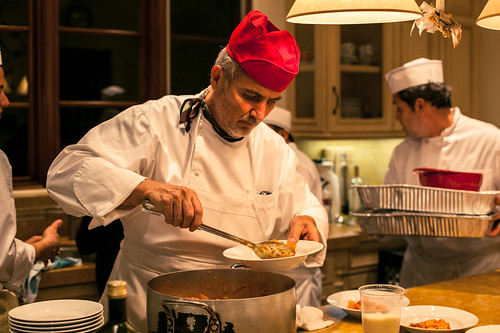 Gino Angelini interprets recipes from Pirelli cookbook for dinner (Photo courtesy of European Car)[/caption] The launch of the Pirelli cookbook marked a bunch of firsts for me. Though always pleasant to see Hadley of Grubstreet LA and Eddie of Deep End Dining, it was the first time I had been at a media event with Maxim, European Car and a few other related publications. Cars and food, they do go together, right? Or more specifically, tires and food? [caption id=“” align=“alignright” width=“240”] 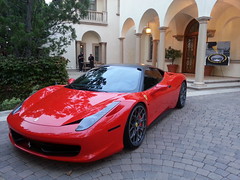 A Ferrari, which we did not have for dinner[/caption] The cookbook details recipes made for the Pirelli team by Chef Fabrizio Tanfani as they travel all over the world in the Pirelli Motorhome. Just as the same drivers, mechanics and technicians drive and calibrate Pirelli’s equipment throughout their travels, the entire team’s meals and diets are just as controlled. The Pirelli cookbook introduction begins, “Preparing a dish and manufacturing a tyre have a lot in common.” So it may be a stretch, but you don’t exactly turn down a private dinner catered by Gino Angelini on a Saturday night at a residence in Bel Air. Turns out that the place with a superb view (which sits next door to Gordon Ramsay’s own house) belonged to Claus Ettensberger of CEC - Claus Ettensberger Corporation, that is. European car geeks - something I could’ve called myself in a former life - know CEC alongside and as the importer of aftermarket brands like AC Schnitzer, Oettinger, Caractre, Lorinser, etc. We have all wanted rims, turbo kits, pulleys, body kits, sway bars, full on tuning kits from the CEC showroom in Century City. But here I was, invited as food media, and it was a crazy feeling having my former and current worlds colliding. (The Maxims piled a few feet high on the top of my ex-boyfriend-from-college’s toilet tank, not excepted…eeesh.) [caption id=“” align=“alignleft” width=“240”] 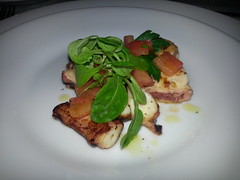 Tyrrhenian-style Octopus Salad[/caption] While we were also celebrating the return of Pirelli to Formula 1 as their sole tire provider, the spotlight of the night was actually on Gino Angelini, Los Angeles’ longtime beacon of quality Italian food thanks to the exceptional reputation of his Angelini Osteria on Beverly Boulevard. The dishes he interpreted come from the Pirelli cookbook, but as one vice president of Pirelli’s marketing division said, “We don’t like to censor the artist” - clearly alluding to the notorious Pirelli Calendar. And so the parallel was drawn. Standouts as interpreted by Gino included the Tyrrhenian-style Octopus Salad, the recipe of which was inspired by Pirelli’s Formula 1 Airtel/Indian Grand Prix stop in New Delhi, India - with the challenge being cooking Italian food with fresh, Indian ingredients. Gino’s rendition was stellar, with super tender octopus - cooked with the kind of skill that blows the minds of droves who have long before dismissed octopus as chewy. The char flavor was just perfect, further brightened by greens and tomatoes. [caption id=“” align=“alignright” width=“240”] 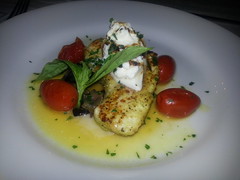 Swordfish Escalope[/caption] The cookbook’s Bucatini All’Amatriciana recipe inspired by the Formula 1 Santander British Grand Prix was reinterpreted by Gino, using bombolotti pasta instead. As always, Gino’s pasta was perfect - flavorful and al dente to the bite. But the Swordfish Escalope with Buffalo Burrata, Grape Tomatoes and Basil from the Grand Prix of Europe was truly was the shining entree of the night. The texture and flavor were perfect in all directions, with burrata lending a creaminess and the tomatoes acidity to the dish. I want this again. The Tirimisu, which is probably prepared all over the world but is said to be inspired by the Gulf Air Bahrain Gran Prix, was boozy and just creamy (thanks to eggs and marscapone) and sweet enough like a proper slice should be. But the kicker was getting to hear how Gino got in trouble with the cops after speeding and was subsequently left to the devices of his limited English. Also be sure to check out his new, 8,000 square-foot restaurant, a collaboration with conglomerate IDG, to come later this fall on Sunset Blvd at the former Hamburger Hamlet. If you’ve been to Angelini Osteria, this volume should prove to be a challenge - but with Chef Gino’s skill, I’m sure we’re all expecting some pretty big results. [caption id=“” align=“aligncenter” width=“500”] 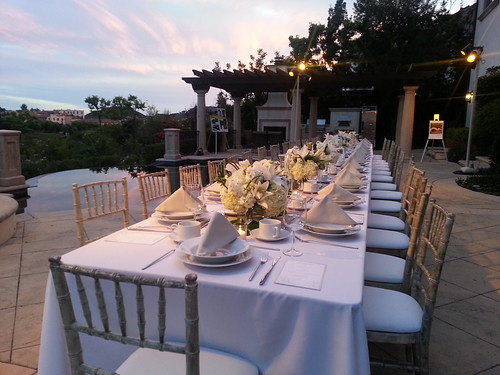 Table Setting for Pirelli, CEC family and media[/caption] All food and wine were hosted.