Pinkberry Is Not Yogurt

Just call me the dairy queen. (I’m from Wisconsin, after all.) L.A. Times reports that Pinkberry is getting sued, since their yogurt is supposedly not yogurt at all but powder–despite the fact they’ve been capitalizing on the “frozen yogurt” label. Sorry folks, I knew it! What dairy product, period, goes “crunch crunch” when you bite into it? 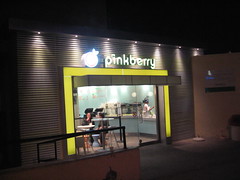 The suit alleges that Pinkberry has unlawfully capitalized on the health-consciousness of the California public by falsely calling its product “frozen yogurt.” Plaintiff contends that, in direct violation of California law, Pinkberry’s product is made from a powder base, mixed with water and/or milk on site, and then sold without notice to consumers of its ingredients. The plaintiff contends Pinkberry’s dry powder mix lacks the bacteria or bacterial cultures that define yogurt and create its health benefits.

I’m quite relieved, actually, that not more than $10 from my wallet has been spent at that chain in light of this news. Still, that’s $10 too much. To think that it was all spent avoiding an addiction, too, and that I could have spent more? The substance seems a little bit dangerous, to me, when people are talking about it all the time because they’re eating it all the time. To you, I say this: If Pinkberry were located even a little closer to either my work or home, it would have been extremely detrimental. Rumors around the blogosphere have been circulating about their intimidating tactics towards competitor “copycats” like Fiore in Little Tokyo. It’s ironic because they’ve copied a Korean “yogurt” chain called Red Mango, themselves. Truth be told, Red Mango is supposedly coming to Los Angeles this spring. (Who knows when that really will be, since spring is practically over?) You can also read an interesting article on the controversy over their secret ingredients and competition over the “fro-yo” in EastWest Magazine here.

Additionally, the health benefits of yogurt are being touted with a sign in one Pinkberry store saying it â€œStrengthens bones and teeth. Prevents bacteria in intestines. Helps prevent acne and build clear skin.â€

Fraud. It’s more like crackberry than you could ever imagine. White powdery substances, anyone? Love, *e

Edit--What others in the Blogosphere are saying: