Piccolo Venice Doubles in Size With Flavors & Charm To Match 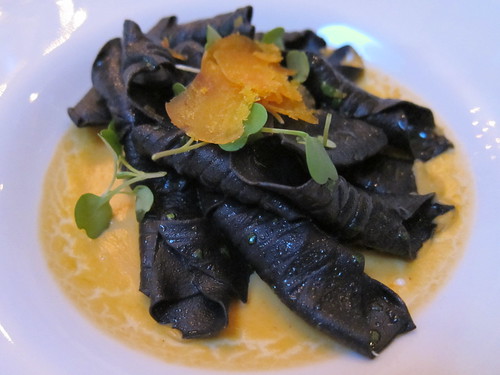 [/caption] I had never been to Piccolo on the beach prior to their remodel. One of my girlfriends, a lady of Venice, had eaten dinner there however and had raved about it - so I was excited when I was invited to taste their food. Piccolo is now twice the size it once was, but to my observation it had the charm to match their expansion. [caption id=“” align=“alignright” width=“240” caption=“Caprese: A Revision”] 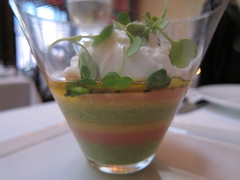 [/caption] I appreciated the open kitchen, which really added to the still-intimate, neighborhood feel of the restaurant. Italian hospitality is exuded by every employee there. The fact that the food also delivers will make you forget that you are dining on the beach without so much as a view of it, lest you score one of the few outdoor patio spots. We’re not in Malibu, anymore. The saying is “location, location, location” (not “view, view, view”), and it seems that Piccolo is more than content to rest its reputation on its food with its locale reflecting its desire to be Venice’s Northern Italian speakeasy. Only public parking is available, and expect no apologies about it - your reward comes in the cuisine. We started out withÂ Chef Roberto’s new-for-summer revision ofÂ Caprese as we knew it - with burrata and micro cilantro topping a multi-colored and -layered, fluffyÂ gelee floated with olive oil and seasoned with a delicious Hawaiian Lava salt. It was refreshing, delightful and a nice introduction to what followed. [caption id=“” align=“aligncenter” width=“500” caption=“Capesante Gratinate | Seared sea scallops over parmesan-truffle fondue “] 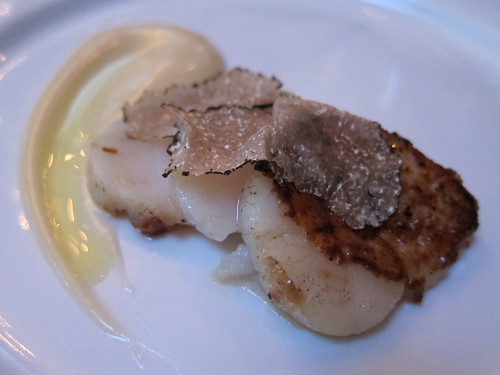 [/caption] With our palates opened, we were ready to enjoy a tasting-sized yet indulgent serving of seared sea scallops - perfectly done so with flavorfulÂ brown coloringÂ on one side of the sliced scallopÂ to reveal an ever slim ring outside a tender center on the other. The thin shaving of truffle, as always, was magic - yet I couldn’t leave a drop of the creamy parmasan fondue on my plate. All three components together are a match made in heaven - made in no small part by its proportioning. [caption id=“” align=“alignleft” width=“240” caption=“Risotto con Salsiccia di Cinghiale | Vialone Nano rice, home-made wild boar sausage, parmesan fondue”] 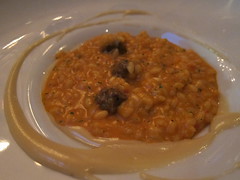 [/caption] The Squid Ink Garganelli was another favorite, with the dark, ridged rolls having that perfect al dente bite; soggy, Americanized pasta seemed more than just blocks away. The earthiness of the egg pasta was further rounded out by shavings of dried, salted quail egg yolk (alternately substituted withÂ bottarga shavings) and the delicious sea urchin emulsion the pasta lay upon. We partook after tossing. The fullness of the egg pasta infused with squid inkÂ was so delicious and could only come straight from the sea - yet precludedÂ the saltiness that the inclusion of shellfish would bring. In this dish, I appreciated that the salt elementÂ was subtle enough to really let the squid ink really shine. [caption id=“” align=“alignright” width=“240” caption=“Germano Reale al Miele | Pan-seared breast of Mallard (wild duck), truffled-honey sauce”] 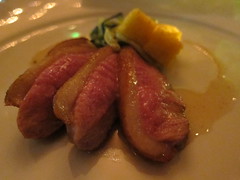 [/caption] The housemade wild boar sausage risotto was also delicious. It had real depth thanks to the bits of sausage and almost-smoky tomato-based sauce. The risotto did well in holding flavor of the sauce whileÂ the consistency of each grain remained deliciously firm at the center - the way risotto should be. The seared slices of duck breast had a delicious layer of fat which was so perfect in absorbing the truffled-honey sauce it was dressed with. It’s an indulgent, sweet Secondi and I would easily order it again (once I had tried most other things on the menu, that is). If sweet, rich and tender bird is your speed, you should definitely order this dish. The pickled greens and cubes of what seemed to be cornbread were great accompaniments, cutting the richness while complimenting the duck slices. [caption id=“” align=“alignleft” width=“240” caption=“John Dory | Riso Venere and fresh orange sauce “] 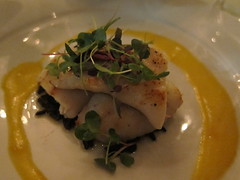 [/caption] For our final main course, we enjoyed the special fish of the day, John Dory. It was plated on top of Riso Venere, a very special natural, organic black rice that is derived from a combination of Venetian and Chinese rice. Here, the buttery, delicate fish is accented with fruit flavors, as the Riso Venere exhibited an aftertaste of blueberries which gave a tasty lightness along with the orange sauce surrounding the tender, perfectly-seared filet that seemed to melt in my mouth. What a special dish. For Il Dolci, we were served a trio selection from their menu. My favorites included the panna cotta encrusted with crushed pistachios. It had more of a custard consistency than gelatinous; the nuts on the fringe were a deliciousÂ salty addition.Â The smear of creme anglaise did well to draw out the flavor of the panna cotta. But the really special dessert was certainly the Fresh Maui Pineapple Carpaccio, which, when I asked exactly what was in the “marinade,” was told it was a secret.Â But Chef Bobo did reveal one ingredient -Â rosewater - consistent with its subtlyÂ floral taste. WhateverÂ else itÂ was,Â the pineappleÂ was such a unique, natural and refreshing-tasting dessert that I’m tempted to go back for more. 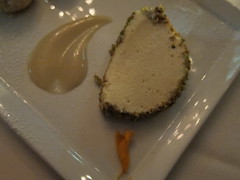 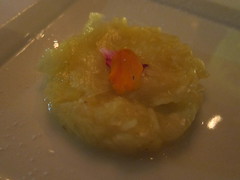 It’s easy to see why the expansion of Piccolo, while perhaps detracting a tad from the intimacy of the restaurant, was well-deserved. Not only can they now serve private parties of 10 in their new dining room, but now more reservations and walk-ins can be accommodated in the former art gallery space. TheirÂ unique Northern Italian menu is well-crafted, well-executedÂ (at least in this media tasting experience) and while I didn’t give it much mention here, Pietro’s wine program is also exceptional. Â The pairings were all uniquely complimentary to the food - from a Speri Sant’Urbano to theÂ sparkling Gragnano from Sorrento…to Moscato d’AstiÂ - Sommelier Pietro will have your wine needs met.Â  All food and wine were hosted.