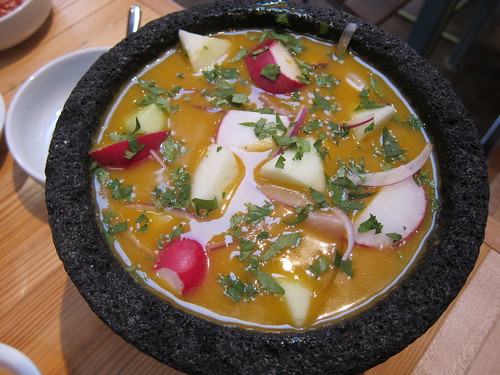 Aguachile en Molcajete[/caption] If the former Playa Rivera, as it stood on Beverly Boulevard, offered a somewhat intimidating Mexi-China concept for the price point at which it met its clientele, then perhaps Petty Cash Taqueria will benefit from all the lessons learnt. The menu is streamlined straight toward Baja, peppered with a beverage selection fit to satisfy the fussiest drinkers in LA. While quality ingredients are in the picture, that doesn’t begin to describe how well the tacos and flavor combinations are executed. After all, who else would show the people of Hancock Park that a charred octopus taco is always what they’ve wanted? [caption id=“” align=“aligncenter” width=“500”] 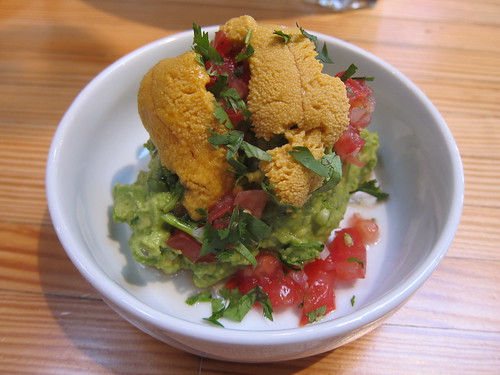 The Bomb.com[/caption] While you’d find it impossible to spend $50 per person at a taco stand, it’d be hard not to do so at Petty Cash. But it’s not unwarranted. This is a sit-down, full service taqueria, with concrete wall art commissioned by street artist RETNA and playlist selections ranging from “A Boy Named Sue” to “Free Fallin’” and “Last Dance With Mary Jane” (and yes, also some songs not by Petty nor Cash, though I have trouble remembering just what). [caption id=“” align=“alignright” width=“240”] 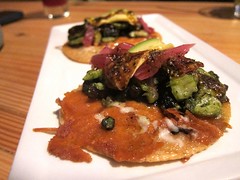 “The Kraken” - Octopus tacos[/caption] Cocktails are a gracious $2 or so under market, with a couple solid brown selections on tap for $8. The best thing about it, though, isn’t the mere price, but the fact that you aren’t shortchanged on the quality of the cocktails nor taste. Curated by Julian Cox and Nick Meyer, these cocktails really pop without overwhelming the food. The basic margarita is as it should be: Better tasting than any frilly-looking variety  you’ll find at some other Mexican joint. Rum lovers will enjoy the Banana Hammock, as only Julian Cox could name it, for its complementary banana and tamarind notes. And the housemade ginger beer is a perfect way to offer a customized buck cocktail, giving you the choice of spirit, bonded with lime in the Buck Dynasty. But my favorite had to be The Brixton, with a base of gin. Poblano sorbet, Thai chili, arbol chili and lime give it that awesome spice, and you’ll definitely want to blow out the flaming rind before it burns off all the delicious, toothy green chartreuse. The Beer geeks will be more than satisfied thanks not only to the 5 solid brews on tap, but a back list - available if you ask for it - ranging from 30 to 60 bottles - all curated by Karen Grill. [caption id=“” align=“alignleft” width=“240”] 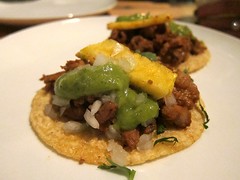 Al Pastor Tacos[/caption] Even the most restrained diners will find the appetizers too enticing to realistically get in and out with tacos and drinks, alone. Consider crisp, delicious, Cheesy Churros with green Mole corn dip; but also Pig Ear Nachos, a Manzke classic, complete with soft egg primed for breaking and ear strips for chewing. You’ll lap up delicious pineapple-carrot hot sauce with airy, crunchy Chicharrones. The fresh-fried, salted tortilla chips kept well in supply by your server are a welcome vehicle for not only the delicious salsa they make in-house, but also the luscious, tart and nutty Ceviche Negro with New Zealand grouper, squid ink, mango and peanuts and TheBomb.com - an ultra fresh guacamole topped with ultra fresh Santa Barbar sea urchin. The tasty, crisp Shrimp Tostada is as much an art piece as it is an elevated version of what you’d find at a  truck around town. [caption id=“” align=“alignright” width=“240”] 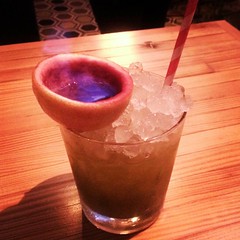 The Brixton[/caption] If you enjoy seafood in the least, you’d best experience it served Baja-style, via Petty Cash’s signature Aguachile en Molcajete. This cold dish, served in its traditional basalte bowl, is the refreshing, elevated centerpiece of the menu; quality ingredients are at the ready for customization, ranging from Kumamoto oysters and Kanpachi to Littleneck Clams, octopus, Gulf White prawns, live Santa Barbara prawns and sea urchin. I found myself lapping up these delicious bites in its cold, tangy and citrusy soup hallmarked by housemade clamato and wild Sonoran chiltepin. You wouldn’t pay upwards of $23 for this in Baja, but then you wouldn’t find such a well executed version at a sit-down, posh taqueria this side of the border. As for tacos, you won’t want to miss “The Kraken,” that is, grilled octopus tacos imparting a delicious, smokey flavor and tender meat, tempered with pickled onions. Before Petty Cash, you’ve never seen the farms from which the meat was sourced listed next to the taco items on the menu, and you won’t likely again - for awhile, anyway. The Pork Carnitas tacos, made with pigs from Cook’s Ranch, had a pretty intense, rich flavor while the quality in the tender striploin cuts in the Prime Beef Carne Asada tacos was hard to miss. Also great were the Al Pastor tacos thanks to their succulent flavor combined with the usual grilled pineapple slice. The Baja Fish Tacos hold down the fort, though when you’ve had Ricky’s, it’s kind of an unfair comparison - after all, they aren’t Ricky’s speciality, but simply just what he does. [caption id=“” align=“alignleft” width=“240”] 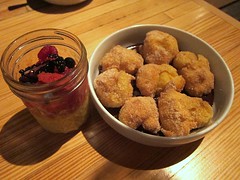 Dessert[/caption] As for dessert: Order the deliciously airy buñuelos and chocolate sauce. They’re the cousins you didn’t even know beignets had. Petty Cash is a welcome ambassador to Beverly Boulevard from Baja, with consulting assistance provided by Bill Esparza, who also curated the tequila list. The combination of Walter Mazke’s talent in the kitchen, Julian Cox’s wizardy at the bar and Bill Chait’s overseeing, revised vision looks to be the winning team that can finally make this space thrive. I look forward to the many visits at the bar in my future. All food and drink were hosted.