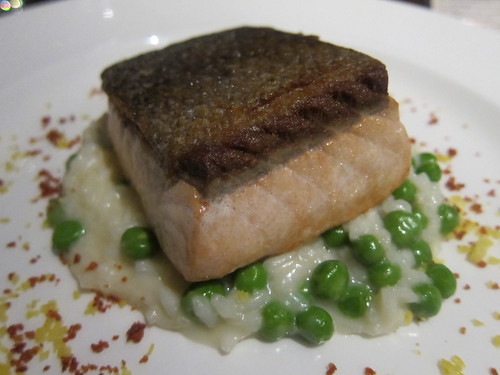 Salmon, Pea Risotto, Shaved Chorizo & Yuzu at Haven Gastropub (Pasadena)[/caption] Times: They are a-changin’. So much so, that I’ve grown to love my neighborhood - even after some growing pains - for its walkability to certain things, including the Los Angeles Metro Red Line. Now the fact that this summer’s dineLA Restaurant Week (which started yesterday) has been scheduled for the very first time in one block instead of only on the weekdays, makes for good incentive to diners to capitalize on the Metro rails and the destinations to which they flow. What better way to enjoy your wine or cocktails with dinner than to finish the trek home liability-free? (Perhaps you’ll want to make a reservation on the the last day of dineLA - the very first day the Metro runs until 2 AM, on July 27 - and make that one a late night?) For the n00bs, lunches range from $15, $20 or $25 while dinners vary from $25, $35 or $45 for a 3-course prix fixe meal. It’s all so simple. Look below for some of my dineLA Restaurant Week recommendations along the Metro - all sorted according to the rail lines along which they are situated. (Sorry, Westsiders - you have Beverly Hills to blame for your dearth of rails.) Expo Line Sang  Yoon’s Lukshon (3239 Helms Avenue, Culver City)in  the  Helms  Bakery  building (one  block  east  of the  elevated  Culver  City  Station)  blends  stand-out  design  with modern  takes  on South-East  Asian  fare in the form of shared, small plates. Try the Hawaiian butterfish: half inch slices of melty cured fish layered just so and finished with slivers of pretty pink watermelon radish and nahm jim, a coarse, nutty Thai sauce. [caption id=“” align=“alignleft” width=“240”] 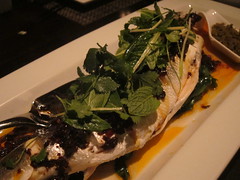 Steamed Black Cod, Lukshon[/caption] Nearby is one of the stalwarts of Downtown Culver City, Chef Ben Ford’s Filling Station (9531 Culver Boulevard, Culver City), with classic, non-nonsense American pub fare with an seen-and-be-scene outdoor patio with views of passers-by and available dineLA lunch and dinner menus. Or stop in at Akasha (9543 Culver Boulevard, Culver City) for dinner, with some farmer’s market-fresh, contemporary American fare offering unexpected twists on otherwise-classic dishes. On the other end of the Expo  Line  is  the  brand new & highly anticipated  Mo-chica (514 W. 7th  St., Downtown),  whose  playful  and inviting  space  is  located  just  a  few  blocks  east  of  the  7th  Street/Metro  Station.  The  newest  restaurant (or re-location from Mercado Paloma, depending on who you ask) from 2011  Food & Wine  Best  New  Chef  and  owner  Ricardo  Zarate  is  loaded  with  playful  design  details including colorful  ekeko  figurines  decorated  by  chef  friends  of Zarate. Try the sun  dried  potato  stew with peanuts  and  chimichurri and bisteck a la pobre (skirt  steak with  fried  egg  and  pan fried  bananas). Gold Line Stop  one  is  Maison Akira  (713 E. Green St.,  Pasadena)  where  chef  Akira  Hirose  has  been  quietly  crafting modern  Japanese -French  fare  for  almost  14  years.  This  gorgeous  restaurant with butter  yellow  walls, is a healthy walk from Lake Station. But when you dine, you’ll definitely want to choose the tempura soft shell crab served atop wasabi potato mousseline. [caption id=“” align=“alignright” width=“240”] 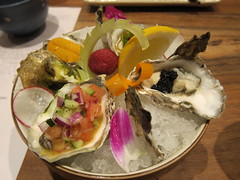 Oyster Plate, Aburiya Toranoko[/caption] Haven Gastropub (42  S.  De  Lacey  Ave.,  Pasadena),  which  opened  last  December,  is  just  a  few  blocks  further  south on  the  other  side  of Colorado.  With forty beers on tap including a handful of in-house brews, Haven is happiness for beer lovers. But the excellent food will surprise you. Try Chef Greg Daniel’s deviled eggs made with smoked serrano powder and topped with Maldon smoked sea salt and crumbled, house-made bacon (on the lunch menu). For dinner, try their flavorful lamb burger finished with onion jam and tzatziki sauce. At the opposite end of the Gold Line in Little Tokyo, is Aburiya Toranoko (243 S. San Pedro St., Little Tokyo) - four blocks Southwest of the stop on Alameda and a pleasant walk past Japanese Village Plaza. Snap up one of the all-time lunch favorites during dineLA Restaurant Week, such as their bento box. At dinner, a ten ounce New York steak with garlic soy will do just fine. Red Line A five minute walk from the Hollywood and Vine station lies Papilles (6221 Franklin Ave., Hollywood)  at  Argyle  and  Franklin. If you’re not keen on them already, don’t let the strip  mall deceive you when it comes to this quaint little bistro with one of the simplest yet satisfying menus. Go prix fixe as per usual in this quaint spot, which hosts just a dozen tables in its cozy dining room complete with low ceiling, red  walls and open kitchen. For dineLA Restaurant Week, choose from dishes such as roast hanger steak with potato gratin and shelling beans, or market fresh fish with red quinoa and roasted corn slaw. Don’t forget the wine, as Santos Uy has just the perfect pour to complement the excellent food by Chef Tim Carey. [caption id=“” align=“alignleft” width=“240”] 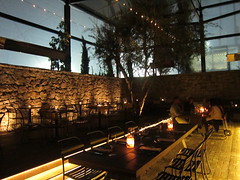 The back patio at Sadie[/caption] Try Cleo (717 Vine Street, Hollywood) inside the fabulous Redbury Hotel, which serves up Mediterranean fare for dineLA dinner. Start off with two enticing appetizers before indulging in the Chicken Tagine or the Grilled Daurade. You’ll be enjoying the best of what Hollywood has to offer - trends and tastes to tantalize your tastebuds - all for $35 prix fixe. It’s one of the glitziest places in Hollywood, much less LA. At Sadie Restaurant (1638 N. Las Palmas Avenue, Hollywood) by the Hollywood and Highland station, you’ll get the best of both the food and cocktail worlds thanks to food by Mark Gold and cocktails by Giovanni Martinez. Enjoy their Parlor Room, Lounge, or beautifully lit back patio for a customizable dining experience - all areas with elegance to spare. Start off with the Basil Risotto topped with olive oil-poached baby tomatoes. You’ll have trouble deciding your main entree, whether it be Ocean Water Poached Scottish Salmon with “hazelnut brown butter” or the Creek Stone Beef Shortrib, complete with potato creameux and roasted forest mushrooms. Blue Line [caption id=“” align=“alignright” width=“240”]

Flan de Elote, Rivera[/caption] For dineLA lunch or dinner, stop by Rivera (1050  S.  Flower  St., Downtown), John  Sedlar’s  gorgeous, modern Latin eatery across the  street from  Pico  Station. Stellar food and cocktails (by Julian Cox) align at this stalwart Los Angeles establishment with no lack of sophistication in any of the senses. Try the  handmade, crisp corn cones  filled  with  fresh crab salad  and  finished with a tequila chipotle vinaigrette. Order the sous vide beef shank with roasted summer vegetables or the Agave-roasted duck. Corkbar (403 W. 12th St., Downtown), just a few blocks east, is a solid wine bar with great food to complement the all-Californian list. What better way to take dineLA local than to drink the finest wines in the state. Chef Thomas Lamont’s dineLA Restaurant Week menu  features  house  made  corned  beef  brisket  sandwich with  pickled  cabbage  and  steamed  mussels with linguini. Purple Line There’s no better time to revisit Water Grill  (544  S.  Grand  Ave.,  Downtown), around  the  corner  from  Pershing  Square  Station, since it has just undergone a facelift with more casual but hip sights in mind. New are chocolate leather booths and a wall of antique fishing rods. But the constant, thankfully, is the beautiful raw bar. Try Chef Damon Gordon’s pan seared skate, finished with brown butter, red grapes and arugula. Perhaps the pan sautéed wild sockeye salmon with asparagus chutney and raw asparagus salad is more your speed. No matter what, your seafood craving will go more than satisfied. Border Grill Downtown LA (445 S. Figueroa St., Downtown) always feels like a party, thanks to its festive interior and buzzing vibe. Just a short walk from 7th Street/Metro Station, Border Grill is featuring grilled local yellowtail with seared greens and quinoa. Vegetarians will appreciate and love their  take on chilaquiles on the lunchtime  restaurant  week  menu. Think tomatillo salsa and melted panela cheese draped over asparagus, fresh fava beans, artichoke hearts and a happy mix of soft and crispy chips. It’s summer! Bar | Kitchen (819 S. Flower Street, Downtown) is one of my favorite places in LA for a cocktail and a bone luge, so why not pony on up to their lunch or dinner menu for some Shrimp & Grits for lunch or Grilled Berkshire Pork Chop for dinner? Just a block away from the 7th & Metro station, this stellar restaurant inside the O Hotel is just what you need for some instant satisfaction.

So enjoy dineLA, Los Angeles. The plethora of options can definitely be overwhelming, but as with anything, a little bit of online research will go a long way. Just use this map for your convenience (bravo, dineLA, on the re-design!), keeping in mind that not all places offer lunch. And remember, whenever you can: Go Green! And Go Metro!