Party On, Singles: First Friday With The Lek 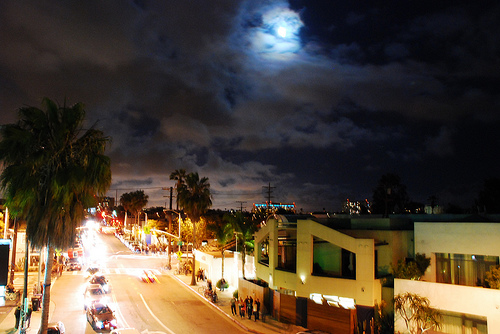 You may be familiar with First Fridays - the one day of the month people crowd surf in Abbot Kinney art galleries - but this August 7th, TheLek.com has collaborated with Air New Zealand to promote their joint tourism effort entitled “The Matchmaking Flight.”

From 6 - 10 PM this Friday, August 7, enjoy an open bar right on Abbott Kinney with RSVP - whether you’re single or not. (But better RSVP soon - there are only a certain number of spots!) Wines from New Zealand will be featured and Steinlager Pure, New Zealand’s most famous beer, will be on tap along with other New Zealand spirits in keeping with the theme. DJ Jeremy Sole (KCRW, Afro Funke’, Musaics) will be spinning Afrofusion, Funk, R&B, Hip Hop and World Beats in putting out the beats all night long.

I’ve flown Air New Zealand to London before and remember being quite impressed with the airline, which is government subsidized. There’s a screen at every seat and a great channel selection. I was also extremely surprised to find the food, which included hot entrees at dinner, decent - certainly a ton better than other airline food out there. Their first attempt at matchmaking crazy singles abroad is set for October 13th of this year. The experience is suited for hooking up, as passengers “will be encapsulated in the matchmaking experience, including: a pre-flight gate party at LAX; themed food, drink, and games throughout the flight; entertainment; and a large-scale, singles-only party in Auckland, New Zealand.” Roundtrip ticket prices start at $780 - which would be extremely cheap assuming that’s from Los Angeles but when does the “starting” range of airfare ever pertain to LAX? They are also offering three add-on packages: â€œRomance” will include relaxing activities and lush destinations; â€œCultureâ€ will immerse travelers in New Zealandâ€™s rich heritage and national treasures and â€œAdventureâ€ is suited for the adrenaline junkies in the pack. And guess what - The Lek will be giving out two free Matchmaking Flight tickets to New ZealandÂ at the party this Friday! I wish I were going - too bad I have to rehearse for a wedding! Good luck, hope you win and enjoy!

Inquire about The Matchmaking Flight