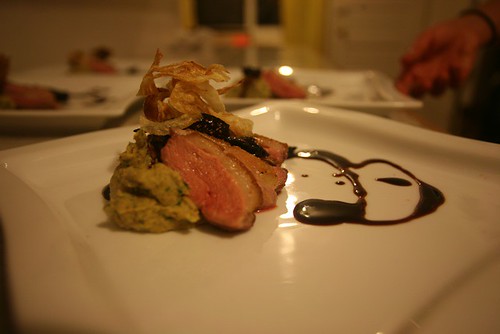 [/caption] When Chef Alessandra invited me to her transplanted-from-Oregon (and before that, Spain) underground supper club, I was intrigued. The theme of the night was of the lovers’ variety. And so I traveled to a quaint backyard somewhere in a lovely LA neighborhood to partake in her Aphrodisiac Dinner. I went solo, but was comforted when I found the dinner party also included fun company - no doubt a result of the kind of company the exuberance of the chef naturally attracted. [caption id=“” align=“alignright” width=“240” caption=“Oyster Two Ways: Sauteed Cornmeal Crusted Oyster on Red Wine Onion Confit & Fanny Bay on the Halfshell With Red Wine Shallot Mignonette | Photo by Tricia Romano”] 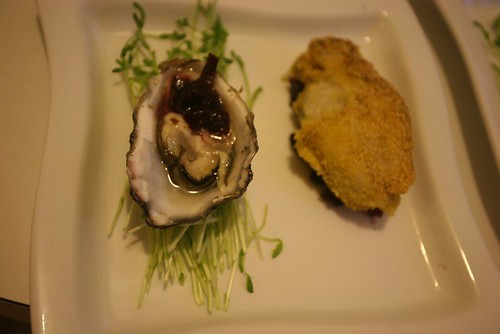 [/caption] It was a beautiful setting - and one in which it was comfortable to enjoy a full-on eight courses (plus a bonus course) with wine pairings. Though I admit I was worried when I saw it was to take place outside, it was not too cold nor too warm underneath that cozy, red light-tinged tent. The setting is no detail to be glossed over when it comes to underground supper clubs, but in Orgasmo de la Boca’s case, it was perfect. The explanations behind what was going on through Chef Allesandra’s mind while constructing each dish were lovely to behold as my fellow diners and I pondered each bite. And so was the pacing. Coupled with the quality and tastiness of the dishes, the dining experience was top-notch. Of course, there was at least one love- (or lust-?) inducing ingredient by any interpretation in each course. Oysters two ways; pork via “Bacon and Eggs” - that is, Poached Arauncana Egg in Iberico Nest with Sundried Tomato Butter poached Fingerlings and Ovan Roasted Grape Tomatoes; chili via Fried Mushroom Salad with Chipotle Chervil Aioli and strawberry via a Strawberry-Ginger Granite as a mid-dinner palate cleanser. The wine pairings were also stellar, bringing in another dimension to each course and even the wine itself as proper pairings should. [caption id=“” align=“alignleft” width=“240” caption=“Dining the Orgasmo de la Boca Way | Photo by Tricia Romano”] 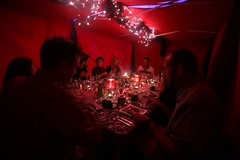 [/caption] I always love oysters - especially on the halfshell - and the spicy Fried Mushroom SaladÂ was absolutely lovely, especially when paired with the ‘09 Marina Alta Blanco. My favorite was actually a main - the duck breast with the cauliflour and basil puree with dried fig and brandy gastrique as well as fennel. Apparently, women used to dust powderedÂ basil on themselves as a scent and figs wereÂ Cleopatra’s favorite fruit. With fennel (which the Egyptians used as a libido enhancement) making the third aphrodisiac ingredient in this dish, perhaps I was really into the thematics and this is why my appetite ultimately “culminated” with this one! Also delicious was the Coriander Crusted Salmon with Sunchoke Puree and Latke in Tomato and Asparagus Broth. With asparagusÂ and especially coriander being the key ingredients here, I admit there is rarely an experience where I don’t enjoy salmon and this night would have been no exception. The coriander was a really nice touch, highlighting the richness of the fish. [caption id=“” align=“alignright” width=“240” caption=“Coriander Crusted Salmon, Sunchoke Puree and Latke, Tomato and Asparagus Broth | Photo by Tricia Romano”] 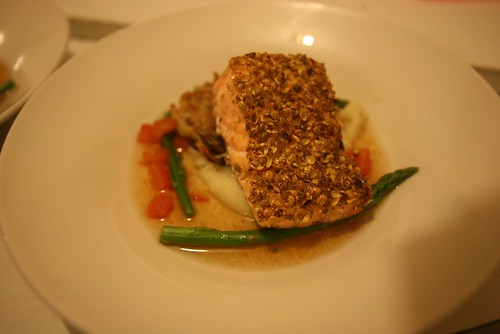 [/caption] Of course, it’s not a proper “love” dinner without dessert, and the “Chocolate Covered Menage a Trois” with sea salt panna cotta, frozen bananas and almond brittle (or manage a quatre with the ‘09 Monticelli Muscato d’Asti) did not disappoint. The saltiness, sweetness from both chocolate and fruitÂ and multiple textures just bombarded the senses and was a conclusion to behold. While Allesandra is known for her smoked olives (see: Artisanal LA), it is clear that she deserves an honest look at her underground dinners. They’re delicious, professional yet hospitable and are a multiple-course tour de force to be reckoned with. The themes change according to her whimsy and inspiration, so there’s a different experience awaiting each diner every time. One thing is constant, however: You can sense her passion in each bite. For the next dinner on June 4, be sure to reserve here. All food and wine were hosted. Special thanks to Tricia Romano for the photos.