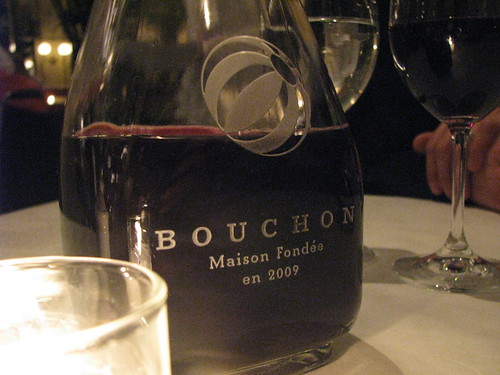 I had heard stories of the red carpet opening a couple nights prior, for which my credentials didn’t quite make the cut. Ultimately, I convinced myself, I was going to have a full meal at Bouchon on opening day - that is, one of the first meals ever served at the Beverly Hills outpost. While I’m not the kind to look a gift horse in the mouth, is notÂ the full meal the important part? Fun as it may have been able to ogle A-listers and pretend I was one myself, the entire dinner experience last nightÂ was indeed a privilege.

Jeremiah and Chad were gracious enough to include me in a reservation Jer so blithely secured the first day the lines opened - by merely walking across the public parkway that separated his employer, The Montage, and Bouchon. Our 4-top was set for 6:15 PM and while we were seated, our greeter thanked us for visiting: “You are our first guests.” 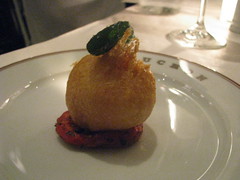 As we enjoyed the fresh house-made bread and delicious butter, Thomas Keller escorted family into the dining areaÂ and Laura KellerÂ - beautiful as ever - oversaw her post in the high-ceilinged, pink light-tinged, perfectly French bistro. Half the entertainment in the duration of the night was hearing Jeremiah’s story of packing up and leaving his home in Arizona to work at Bouchon Yountville - and of course the invaluable stories in the kitchen that ensued after the uproot.

We ordered a Pisco Sour, Tonic &Â Gin and a spritzer with orange bitters to start things off. My Pisco was nice and eggy, the way I like it. 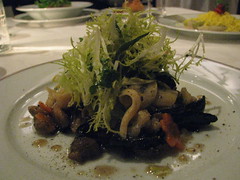 Oh, cod beignets. So dense and yet delicately fried. The sweet tomato confit complemented the salty fish and the crispy sage was just the touch of green the bite needed. Chad got the Salade de Betteraves et Poires (marinated beet & poached pear salad with toasted hazelnuts, garden mache & black truffle vinaigrette) which he was extremely happy with. Jeremiah went with a watercress & endive salad with Roquefort - but I was extremely happy having ordered the salad special - a cornucopia of mushrooms topped with frisee in a sherry vinaigrette. I was impressed with the variety and quality of mushrooms. WhileÂ a sweeter take than I’ve usually had involving mushrooms, it made me really appreciate the frisee it was topped with. 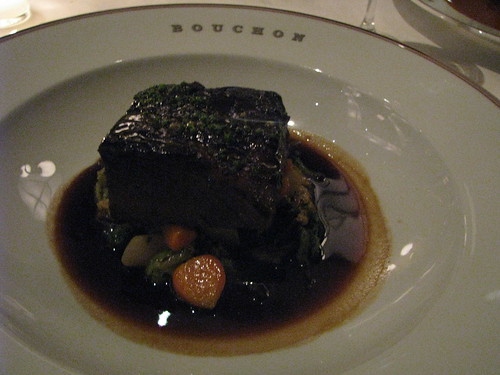 This is where we moved to the carafe of wine - a perfect Pinot Noir from Sashi Moorman (Stolpman Winery north of Santa Barbara) from their Vin de Carafe Rouge program. It was suited to everything we’d order thereafter. My braised shortribs were of course tender, savory but also not too sweet. The tang from the jus de Boeuf was perfect and while it’s tough to go wrong with a braised shortrib, I was ultimately happy with the dish and promised I’d go harder on them the next time. The other omnivore at the table, Jer, got the roasted leg of lamb (with Swiss chard, pommes boulangere, Swiss chard ribs & lamb jus) while Chad ordered the halibut with grapefruit confit, which was a special last night. Jeremiah was happy with how perfectly-cooked the lamb was from the cross-cut and I was forever intrigued by the delicious briny Swiss chard the meat was topped with. 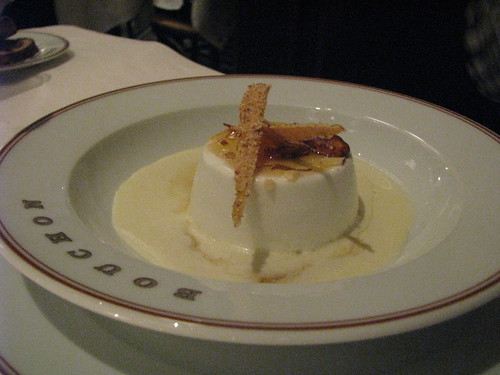 While cheese enthusiast Chad asked our server to choose three cheeses for him (one each of goat, cow and sheep’s, of course) Jeremiah definitely got the winning dessert of the night. He recognized it as a new dessert that wasn’t on the menu while he worked at Bouchon - and indeed it was brand new. The Ile Flottante resembled a panna cotta yet had a looser consistency. The salted caramel sauce made to pour was divine. (Yes, I admit - I’ve beenÂ a salted caramel fan for awhile now. What - aren’t you?) The almonds finished off the taste and gave the dessert an overall weight. Such a beautiful dessert. My lemon tart was refreshingly light. Pine nuts were in the crust and the consistency of the lemon for once wasn’t custard-like but incredibly fluffy. I wondered how they gotÂ the fluffy textureÂ so brown, to which Jeremiah divulged that it is broiled on multiple sides to achieve that color.

Our server, recognizing that Jeremiah had spent his fair share in a Thomas Keller kitchen, asked if we would like a look inside theirs. Uh, absolutely. We met his old boss, Jeff Cerciello, who oversees all of Thomas Keller casual dining (Bouchon, Bouchon Bakery, Ad Hoc) as well as “TK” himself - a very gracious and kind soul despite the reputation he has built for himself. Yes -Â very surprisingly to me. Bonus. I was giddy just to witness Chef Keller ask Jer where he is now after having left Yountville.

After failed chances at reservations at Per Se and never even having visited the Napa area, I finally had my first Thomas Keller experience (That is,Â outside of a grilled cheese and Arnold Palmer at Columbus Circle’s Bouchon Bakery). I was floored by the quality and perfection strived for in each dish, all on opening night.Â The intention was clear: To make everything extremely well and to perfect homemadeÂ recipes without the distracting flourishes high-end dining so often has come to rely upon. While I don’t have another reservation in my sights, I would be content to sit down at the bar - perhaps after 10 o’clock - and enjoy this caliber of French Bistro as much as possible. I can think of many more nights where I’d run into fellow food bloggers like I did Kevin Eats and Christine ofÂ Folie Ã  Choisauce on this night. (I also heard I missed Betty Hallock of LA Times and Joe Pesci. Oh right - I also saw Don Johnson. Yep.)

(Expect reservations to be booked for the month ahead) 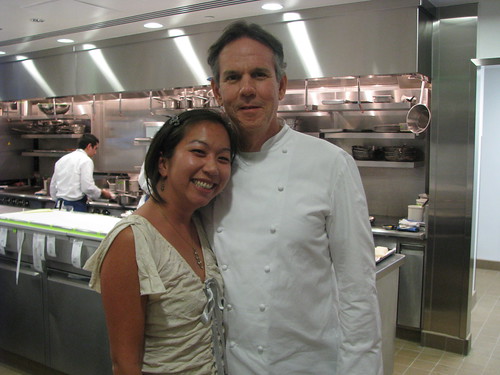