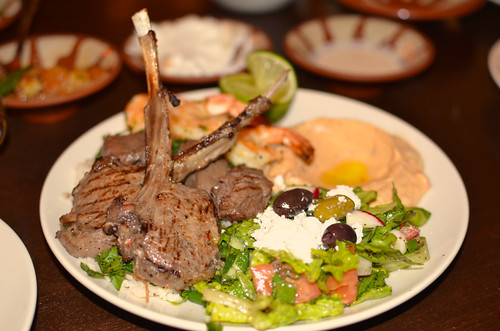 Sultan’s Platter[/caption] In the old space that once housed Hatfield’s, then Eva Restaurant, is now an outpost of a successful Belmont Shores import. The new location of the Lebanese chainlet called Open Sesame is admirably strategic; it’s well north of other Mediterranean haunts on Pico but south of those in The Valley. It adds to the diversity of dining options on Beverly Boulevard, and from my experience a couple weeks ago, a viable choice for flavorful food which also doubles as healthful. Those seeking vegetarian, vegan or Halal compliant will be happy that this popped up in the neighborhood. [caption id=“” align=“alignright” width=“240”] 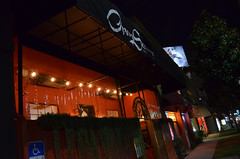 Open Sesame Exterior[/caption] To start, you’ll probably want to see what the fuss over their Fried Potatoes is all about. In a nutshell, it’s that crispy outside with a melty inside - but also cilantro, garlic, roasted chili and lemon juice. It’s pretty easy to see why this has been a favorite throughout all three locations. The Falafel Patties also make a solid showing, with the perfect crunchy coating - not too thick - on the outside and moist on the inside. There is also a duo of hummuses to try; my favorite was the spicy variety, made with roasted red peppers for that kick in the pants. But if you want to know which dipping sauce is truly addicting, you’ll order a side of their garlic sauce - a white, pasty-looking mixture that you’ll end up dipping pretty much everything in. The stars of the show were most definitely the Chicken Tawook as well as the Lamb Chops, the latter of which, along with a couple huge prawns, hummus, salad and rice, is also available as part of the Sultan’s Platter. The chicken was perfectly seasoned - not bland - as well as juicy. When dipped in the garlic sauce, each morsel is pretty much dynamite. The lamb was tender and bursting with flavor - each bite a joy to gnaw off the bone. [caption id=“” align=“alignleft” width=“240”] 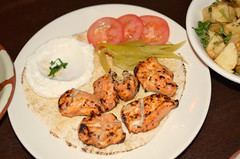 Chicken Tawook (and Fried Potatoes)[/caption] They’ve also done a great job with the interior, which now effuses a sort of loungey ambiance in the narrow space. While their Long Beach locations are known to require quite a wait, the Beverly Boulevard location hasn’t quite caught on, yet - so visit soon while you can get in on the fast seating. The food came out surprisingly fast, too, betraying how streamlined they’ve gotten in their other locations despite the demand. The prices are also so reasonable, that with the other factors like speed and great ingredients, Open Sesame is a strong contender for fast-casual Lebanese. I just wish I had remembered to also try one of their cold-pressed juices or Jalab beverages. Guess I’ll just have to go back. Fortunately, I’ve got two $50 gift cards - each of which should be good for dinner for 2 - to Open Sesame to give away so you can see what they’re all about. To enter, simply do the following:

Contest closes Sunday, December 8, 2013 at noon, when I’ll contact the two winners for their mailing information. If you don’t respond within 3 hours of my email, I’ll have to pick another winner. Good luck! All food and drink were hosted.