On and In Hollywood

It would make sense thatÂ the people who complain the most about the traffic in Los Angeles don’t live in L.A.Â  I tend to think that the complainers are usually commuters, who drive in and out of the city on a daily basis by way of a freeway (which Southern Californians tend to refer to as proper nouns by placing “the” before each numeration).Â  As for the Metro L.A. area, though, you can stillÂ always complain about it–the carsÂ ain’t going anywhere–but when it’s so commonplace, it’s beating a dead horse when you combine L.A. and the mere occurance of traffic.Â  It’s really just old news to your average Angeleno.Â

Such advice is useful when you endeavor to make Happy Hour.

You work in or near L.A. andÂ you want a couple cocktails to unwind after a grueling day at work.Â  Understandable.Â  After all, there’s no shortage of places to get lickered, here.Â  But the problem is that Happy Hour never lasts very long.Â  And once it’s over?Â  It’s full price.Â  This amounts to pretty much only one Happy Hour per day–or per week,Â as is my quota on weekday debauchery.Â 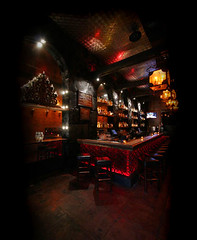 So C picked out a new spot for us to try last week Friday–ironically or not so ironically located right on tourist-cladÂ Hollywood Boulevard–called L’Scorpion.Â  What was nice was their specialÂ ”Hour” ends at 8pm, instead of the usual 7pm.Â

Their Happy Hour special is half-off drinks.Â  Appetizers are full price and as a full-fledged “bar” they don’t serve any meal food.Â  Good thing they have really tasty drinks.Â

I would definitely try their Pomegranate Margarita–it’s what I had and it was the strongest of the bunch.Â  Their Cucumber Margarita was delcious, too.Â  Other varieties included Prickly Pear Margarita and Honey Dew.Â  You get chips,Â with which you should definitely order a side of their guacamole.Â  ItÂ is heavenly. 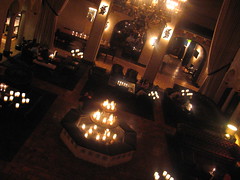 Afterwards, we headed on over to The Roosevelt Hotel for pool and to scope out some food for roycifer, who had joined us.Â  You may be aware that The Roosevelt is indeed a landmark and a current celebrity hostel alike.Â Â Apparently, there was a Playboy Party going on at the same time, as we saw some rather young blondes scurrying into an elevator car full of _more_Â blondes in scantily-clad clothing…or no clothing, at all, but simply body paint.Â  (The giggles threw the needle of my internal IQ detector into redline.Â  Not to mention my jailbait meter coming off the charts.)Â  I would like to apologize, here, for not having the presence of mind to pull out my camera nor the gall to snap a few shots for your enjoyment.

After we composed ourselves, my friends aimed to borrow the incomplete pool set at the reception (with two 9-balls and no 5) while we went to the Roosevelt’s first-floor restaurant called 25 Degrees.Â  Their motto was “Burgers and Wine.“Â  Very interesting.

And we hear that these are practically the best burgers in town.Â  Neither of us were hungry for a complete burger, but they came out of the kitchen with their round buns aglaze and their irresistibleÂ aroma wafing past our olefactories.Â Â Had I not been full on nacho chips, guac, and shrimp tacos,Â one would have been mine.Â  Well, they certainly looked like the best burgers in town.Â  The fries we ordered to compliment our drinks (yes they have a full bar, too) were delicious, crisp, and freshly cut straight from the potato–yet not soggy like In ‘n Out fries become after just a few minutes.Â  The place had a cool vibe to boot, with its own vintage wallpaper, hipster patrons and Coca-cola served in the nostalgic glass bottle. 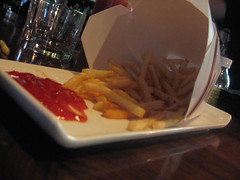 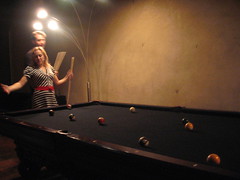