Having grown up in a city filled with people of German and Polish heritage (my exact suburb of which is called New Berlin), I’ve had my fair share of bratwurst while tailgating. It’s no joke, either. Each link is marinated in beer before it’s grilled, then consumed underneath a line of mustard while nestled inside a hot dog bun. In German class, we had this field trip to MÃ¤der’s–a German restaurant in downtown Milwaukee. It was alright. Not the best. I just remember that my beef steak had some sort of layer of fat on top of it. And that was my best recollection of so-called, archetypical German food. The beer? It would have been Miller Genuine Draft (or shall we call it MillerCoors soon?); that is, if we had the same drinking age as the EU (age 16). That is really not to underestimate the drinking abilities of the Wisconsin people, by the way. If you’re not familiar, before many of the breweries moved to St. Louis, it was Milwaukee that was their home. Also, the University of Wisconsin-Madison is consistently voted “Biggest Party School” every year. But that’s Milwaukee. This was Munich. Nothing can really prepare anybody for Oktoberfest. 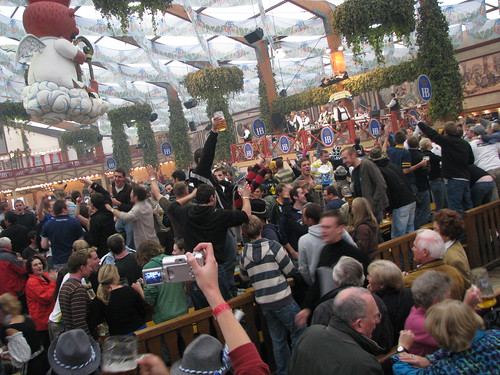 Since I arrived back home, Stateside, on the last day of September, friends would be surprised that I had attended Oktoberfest in Munich. They’d often ask, “Already?” In reality, Oktoberfest has always started in September. Traditionally, it’s been held during the 16 days leading up to and through the first Sunday of October since 1810. And according to the Bavarians, the first brewery in in the entire world is said to have existed nearby Munich as far back as 179 A.D. They really take their beer seriously.Let’s not forget the “Bavarian Beer Purity Laws” or “The Reinheitsgebot of 1513.” That’s right, the beer is state-regulated in the region. In a nutshell, that means that Bavarian beer can be made of only four ingredients for it to be classified as such, those being: water, malt, hops and yeast. Corn syrupÂ not allowed. Enthusiasm for this “purity” has only intensified. In fact, a controversy arose only 20 years ago when they tried to regulate that all beer even being sold–not just made–in the area adhere to these laws. The EU stepped in and said it would be a violation of fair trade laws and so, even though it was disallowed, the spirit of the local breweries and the commitment to their beer tradition was only strengthened. You can also find arguments against the validity of these laws as just being hostile to the competition and in no way an indicator of quality. 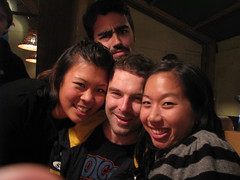 But I didn’t know all that while I was in the HofbrÃ¤u tent. All I knew was that there was a crapload of people and that the Theresienwiese or Wies’n(fairgrounds) was huge–about 7 million people over 16 days, spread over 100 acres, drinking 1.5 gallons of beer–making it the largest party or festival in the world. Also, for probably the first time in my entire life, no matter which of the six Munich breweries brewed it (Spaten, Augustiner, Paulaner, Hacker-Pschorr, HofbrÃ¤u, LÃ¶wenbrÃ¤u), the beer tasted really good. I’m not particularly a beer drinker, y’see, but this stuff definitely made me intrigued. So did the festivities and the spirit of this huge ass party. We couldn’t believe that we were really there. It really was just crazyness.

At noon. ‘Cause we were going to get kicked out at 4pm when the locals came to claim their reservations. [A tip: come early to get a table on a weekday if you’d like to sit down inside a tent because at night and weekends it will be near impossible. Or with some planning and a travel group, make a reservation by FAX through the tent–typically available with groups of 6 or more.] 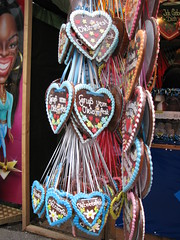 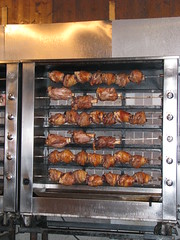 When you’re at Oktoberfest, you’re always with company. If you don’t come with a group, you meet people there. Roycifer and I had a ball hanging out with a couple people from L.A. (whom I met through my roommate) and their many Aussie friends they had made at a hostel inÂ Berlin not a couple weeks earlier. There are no pretensions at Oktoberfest and it’s just a merry ol’ time. When you raise your 1-litre maÃŸ (stein)–it’s “Prost!!” We toasted the Germans at our table. We toasted the Americans across the way even though one of the guys went to $C. We toasted the Aussies. And then we toasted more Germans. Middle-aged Germans. Teenage Germans. Whatever the age, most were dressed in lederhosen and drindls. Purely awesome. With each raising of the 1-litre stein (1.76 pints), I felt I was completing a weight workout. And though we were tempted to take an empty one, we decided not to risk the â‚¬50 ($75 USD) fine of getting caught. We purchased our replicas at a nearby stand for â‚¬8. ;) Droves of Italians come the first week of Oktoberfest. They make everyone known that they are the Futbol champions of the entire world. A chant they do is fashioned after the opening of The White Stripes’ Seven Nation Army and combined with the traditional Bavarian Prost song that is sung often in order to toast Prost!, you have quite a lot of singing and hoo hah. 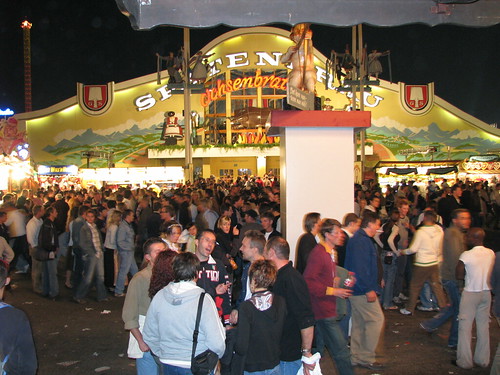 And a lot of “I’m going to the bathroom.” I didn’t even know if it was grammatically correct or not, but my phrase to the Germans inside the tent all that day was, “Wo ist der vey tsay [WC]?” Where are the water closets? “Wo sind die Toilette?” When outside, you look for the cupid and where he points his arrow. And I really have to commend the fairgrounds for appropriating enough stalls for everyone–after some research, I found that they added 20% more toilets in 2005. But at one point, I had lost Roycifer, my beloved traveling partner. He had just never come back from the water closets. It happened either in the HofbrÃ¤u-FestzeltÂ or ArmbrustschÃ¼tzenzelt (serving Paulaner), I’m not exactly sure which. I followed the Aussies around a bit through the rain andÂ at one point deliberately, artfullyÂ ripped aÂ hole in my jeans by tripping onto my right knee *snort*. Luckily, I was able to meet up with him again one U-bahn ride, a transfer and an S-bahn ride later–back at the hotel.We never did Oktoberfest again that week. We had our fill of crazy–and it was great. Love, *e