It’s not that I’m obsessed with it. It’s just because the thing is on my block. It’s in my neighborhood, and it’s my business to know these sorts of things. Plus, it’s probably the most interesting fixture-building-thing I’ve seen in quite some time. It’s a trip to see this …gas station… just kind of sitting there, around my corner. Yes, gas station. I finally satisfied my curiosity of the structure when I stopped to fill up on a full tank of gas. 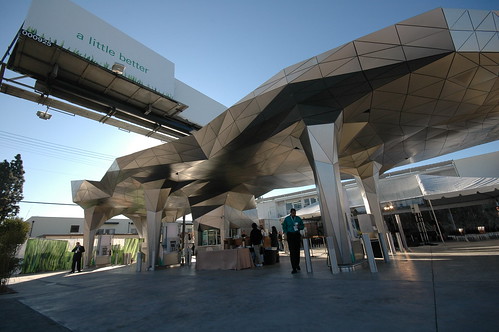 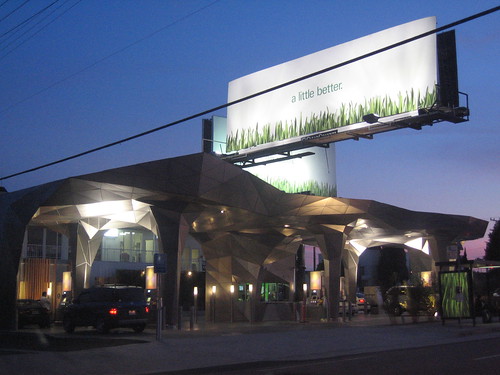 Apparently, what LAist called “The Poshest Gas Station in Los Angeles” is called The Helios House, according to British Petroleum (BP). You can see Treehugger’s write-up here. As Judy filled up on gas, I made myself feel better about where she was filling up as I snapped some shots of the “landmark” with my camera. The employees probably saw how interested I was, as one of them came out and educated me on their forward-thinking structure. I get it, though. “a little better.” It’s not as if they claim they’re not dispensing fuel for profit which, when combusted in our cars, emits carbon into the air. Instead, they claim that it is the first gas station to be submitted for Leadership in Energy and Environmental Design (LEED) certification. According to the guy who talked with me as the pump was pumpin’, the gas station uses 20% the amount of energy of a normal gas station. What’s more, it is entirely self-powered. Rainwater (when there is any–it’s L.A.) drains from the roof, as is the water from the restroom facilities when it’s filtered back in. Cacti and other desert plants, which are natural insulators, are planted on the tops of the roof and they have eight solar panels on top of the pumps, which is where the station’s energy is derived from. The guy also gave me little bio-degradable info flyers with seeds inside the paper, so that if you were to plant them, little seedlings would sprout. Cute. The LED lighting on the signage and around the gas station saves electricity. The building itself is made from (recyclable) aluminum panels; the cedar wood on the outskirts and in front of the bathrooms is made from “recycled and sustainable materials.” The plants surrounding the station are also watered with the bathrooms’ filtered water. At a display installed at each pump, they flash “easy green living tips” at you along with the green attributes the gas station features. The approach BP seems to be taking is, if they can’t single-handedly demolish our lifestyle of petroleum fuel consumption, at least they can educate us on other ways to “live green.” Diversion tactics, much? In the end, we’ve a long way to go, but they’ve taken some baby steps to get there. I like the quote Treehugger used to convey this progression: “Skate to where the puck is going, not to where it is.”

…and if they’re able to improve their public image in the meantime, can we hate them for it? Those oil companies are becoming mighty tricky with their marketing these days. Love, *e