I’ve been keeping busy. It’s been really good for me, because it gives me a chance to enjoy yet pass the time being with friends while things are being repositioned in my head. I’m in recovery.

Last Friday, I had the privilege of joining one of my best friends in the world in attending the premiere of an independent film noir he was in, called Wizard of Gore. The film stars Crispin Glover, Bijou Philips and Kip Pardue. Good ol’ “Crisp,” I will always remember as being the creepy guy who ripped locks of hair in the remake of Charlie’s Angels; Bijou Philips, I remember first learning about as the shortest model in her time like, in Seventeen Magazine–since we’re exactly the same age and all. Tim, though, had about 6th billing! He does me so proud with how hard he’s working! (You may recognize him as a regular paramedic on Grey’s Anatomy. Also, look for him in an upcoming “Crash”-like film on immigration called Crossing Over, starring Harrison Ford, Sean Penn, Ray Liotta and Ashley Judd!) Since the premiere was at midnight on the first night of the L.A. Film Festival, we started out the night at a pre-party at The W Hotel in Westwood. Though I went to school not more than 100 yards away, it was my first time actually inside The W. Pretty fabulous. And when Tim’s “plus five” weren’t on the list to get in, the producer and his date sidled up behind us and said to the girls checking us in, “This guy’s in the film. Anyone he wants in, gets in.” Sweet. The party had The Garden in the back reserved. We had a time mingling, hanging out, talking and straight-up Hollywood BS-ing. In Westwood. There was a sort of magic show going on but not many paid attention. It was a bit surreal, actually. I’m reminded that I probably wouldn’t last in the entertainment industry, because quite frankly it takes a lot of energy to BS with, for instance, someone who says he’s going to walk me into their friend-who-has-a-show-on-Bravo’s salon and gonna get my hair did while keeping in mind the cookie cutter Hollywood assumption that I’m never going to see this guy, ever again. It’s interesting, though, and a fun way to really practice the “networking” skills. But being able to do that just to be in your line of business is why I admire Tim for really following his dream. Doing what he loves. And I’ll be Hollywood BS-ing right there with him the whole way! Afterwards, we caught a cab to south of Wilshire to attend the premiere in the historic Magestic Westwood Crest. I hear from a friend it’s going to be torn down, soon, which is very unfortunate–however, I can’t confirm that for sure.

before premiere of Wizard of Gore”)

My best friend (my date) and I followed Tim and his on the red carpet. At one point, a gentleman with a microphone and a cameraman behind him asked me, “What are you wearing?” I couldn’t for the life of me remember the brand of my dress–only that the label was a black ribbon. Plus, I had gotten it at a sample sale. I sold the pseudo-interview, anyway, by quipping, “The best deal in town,” and explaining that I really didn’t know but I was excited to find it. He thanked me and I continued down the red carpet. Now, when I say film noir, I mean a really, really gory version of it. I’m talking about pushing the envelope as far as it can go, and then pushing it even further. Of course, in true e*star form, I started to pass out but mind you it was only because I had known Tim’s scene had passed. As I unsuccessfully resisted conking out, I still heard sharp, metal objects cut into flesh very loudly. Tim had found the film, despite (or because of?) its gore, very intriguing, however. I would recommend seeing it if you are into that. Since a couple friends and I had defaulted to watching 1408 (a movie based on a short story by Stephen King) the next night, I would see two horror movies within two nights. I think I’ve reached my horror quota. Congratulations, Tim!! I’m so proud of you. Love, *e P.S. - Thanks to a friend I met through Greg, I also had an opportunity to go sailing over the weekend! I had only been sailing late at night once, before. Lynn’s friend from Cornell knew how to sail, and so our party of 6 rented a 22-footer sailboat in Marina del Rey. Below, my cameraphone catches Captain Scoobie sitting atop the deck in the front (any enlightenment as to what that part of the sailboat is called is welcome). More pictures from Lynn’s camera to follow… 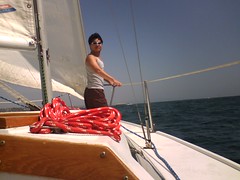