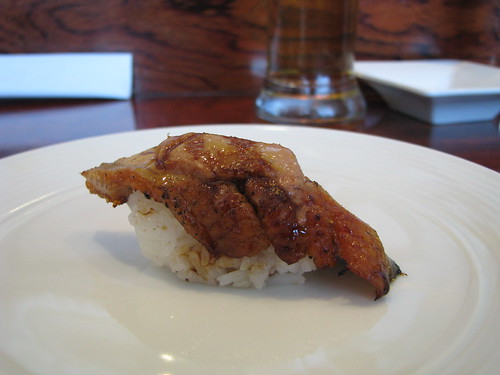 I always knew that South Coast Plaza was one of the premiere places in Southern California to shop. Until recently, I’d never the opportunity to find out that it’s also a destination to eat. I, along with a few other bloggers, were invited by the PR company representing the South Coast Plaza restaurants to go on a tour, extending overnight, of a few of them. 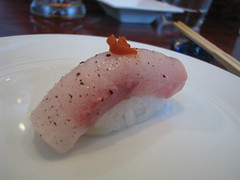 Our first stop was Hamamori - a Japanese restaurant headed by James Hamamori. While I wasn’t sure what to expect, I was pleasantly surprised - mostly by the sushi dishes that came out. Above is freshwater eel sushi with foie gras and a torch taken to the top layer - rich texture and taste. Also good was a yellowtail sushi prepared with lemon salt and topped with chili paste, which actually had me wishing there was a bit more chili paste on the sushi as I tend to prefer spice in each 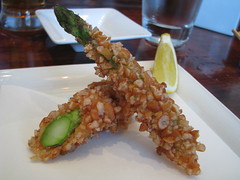 bite if given the choice. A scallop version also prepared with lemon and shiso salt but topped with caviar, instead, was also good. The appetizers were also respectable. There was a dish of chopped, seared albacore prepared with soy, vinegar and fried green onions which seemed rather typical but a creative option was an asparagus tempura but the dish - instead of being simply battered and fried - was encrusted with bits of fried japanese crackers. A heated stone option is also available if sizzing, fine slices of kobe beef dipped in sauce fits your fancy. Chili salt, apple sesame and steak sauce are paired for the dunking. The first was a sort of unremarkable dipping option (tasted simply as salt - not much chili) while the apple sesame reminded me of a Korean BBQ marinade. The steak sauce was a tad smokier yet still sweet. The experience of cooking one’s own meat on the table, in any case, makes for an interactive experience fit for family outings and dates alike. 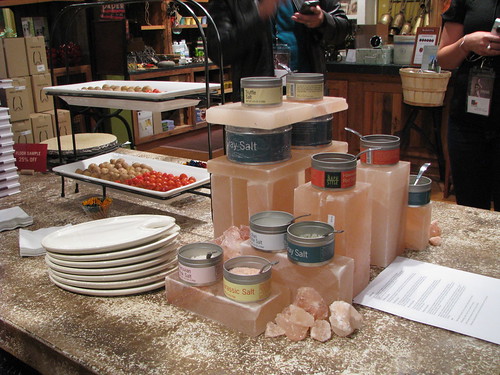 Our second stop was the Napa Style store, a retail store and brand set-up by Michael Chiarello of Bottega (Napa Valley) and Top Chef Masters’ fame. Known for infused olive oils and specialized salts, the store served as an interesting exploration of both quality cooking ingredients for the home and a lesson in Chiarello own love of family. We got to sample all specialized, organic salts with cherry tomato and fingerling potato halves and since I’m more inclined towards a “salt tooth” than a sweet one, I especially enjoyed this particular tasting. The most common salt - gray salt - is also the most versatile while the predictably more savory and high-priced one is the truffle variety. Also for sale are Hawaiian Red, Peruvian Pink, Sicilian White and Jurassic. Cookbooks with recipes using the salts are also available in the store. We were shown varieties of Chef Chiarello’s unfiltered olive oil before tasting his wines, which helped wash down our tomatoes, potatoes and salt. Amazingly, each vintage is named for one of Michael’s sons or daughters. Young vine zinfandel is named Giana for his youngest daughter (good with light fettuccini or perhaps a spaghetti bolognese) while his old vine (2006) zinfandel is named Felicia for his middle daughter (good with pork roast or lamb). Roux, his oldest daughter’s nickname, is the label for his old vine petit syrah while Bambino is his young Cabernet Sauvignon. The old vine Cabernet, however, is reserved for his wife’s namesake - Eileen. All grapes are grown on Chiarello’s own 20 acres near St. Helena. The wines themselves were very good, especially the 2006 vintages. The wines’ price points average around $50. 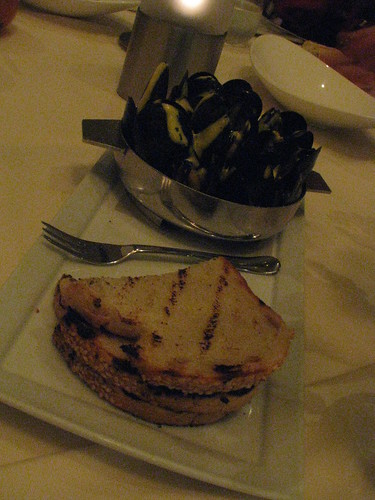 Our next stop was next door to Bloomingdale’s for Charlie Palmer. We were first shown the wine cellar as we sampled a number of their refined cocktails. While the cellar didn’t provide enough lighting for verifiable pictures, I was pleasantly surprised and impressed by their cocktail program, actually. One of my favorites was the Blackberry Besos, made with Tanqueray, blackberries and thyme, but true to my penchant for spicy food and drink my absolute favorite was the Spicy Seduccion, with Grey Goose, citrus, peppers and candied jalapeno. Of course, what is a drink without gobbling the garnish? So Kat and I exhibited a fit of masochism as we chewed the candied jalapeno - which hurt so good! 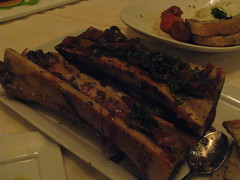 Afterwards in the banquet room, we were served an extravagant number of small plates to enjoy - my favorites of which were mussels (prepared with garlic, white wine, saffronaioli and served with a side of grilled sourdough) and roasted bone marrow and raisin marmalade served on the half. Another remarkable plate was a tuna ham ($40/lb.) atop sunny side up egg, potatoes and salsa tartufara. Savory but still delicate. 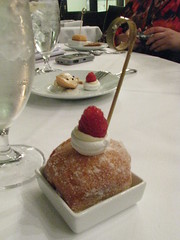 Our final stop of the night - at MarchÃ© Moderne -Â afforded our dessert. Located atop the mall amongst the likes of Christian Louboutain and other luxury boutiques, the French bistro had me wishingÂ the average stomachÂ had enough room for three main course meals. Regardless, MarchÃ© delivered quality desserts for a proper cap of the evening. The crust in the Banana cream tarte was adequately buttery (and I do love my butter) while the green tea and apricot macaroons had an almost flaky quality to their shell. The flavorful filling added to the soft, succulent center. My favorite dessert had to be the beignet filled with a silky cream. The beignet itself was airy and dusted with sugar and powdered sugar. Afterwards, we retired for the evening in ourÂ respective, hostedÂ rooms at the South Coast Plaza Westin Hotel with our generous gift bags. The next morning we rose for a continental-type breakfast and conversation with Executive Chef Lauren De Rouen at Pinot Provence. It was interesting to hear of her many stories, including an apprenticeship for Team California in the Culinary Olympics before joining the Patina family. 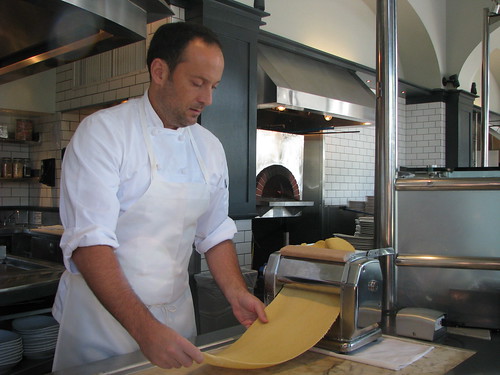 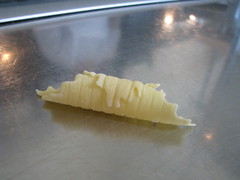 For our final stop, we learned how Executive Chef and partner Steve Samson of Pizzeria Ortica makes pasta using an ItalianÂ stainless steel pasta rolling machine. We got to witness how different shapes of pasta are formed, including filled shapes - supplanted with a pastry bag filled with a mixture of burrata, ricotta and egg yolks. Garganelle, agnolotti, tortellini, tortelloni, ravioli all were in the demo - withÂ a few of us trying our own hand making garganelle with a gnocchi roller (personally, I think mine turned out great). 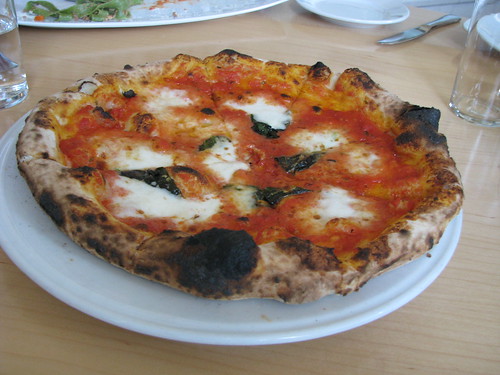 Afterwards, we got to taste varieties of the fruits of their labor. My favorite was sous chef Zach’s recipe, which was a pear and peccorini tortelli. Completing our light “lunch” was a Pizzeria OrticaÂ margherita pie, the bottom crust and sauce of which I really enjoyed (a rare phenomenon for California pizza, personally).

Overall, this was a very impressive food tour. I was pleasantly surprised by certain dishes each of the restaurants had to offer. I’d certainly return for a pie at Pizzeria Ortica as well as try more sushi creations by Chef Hamamori. I would also like to try some main entrees at MarchÃ© Moderne to get an appropriate read on their French bistro fare.

Disclosure on hosted giveaways (besides all meals and Westin hotel room) in the spirit of the passing of recent blogger FTC code:

(Apologies if I’ve forgotten anything - I’m still getting used to this “full disclosure” rule.) ;)