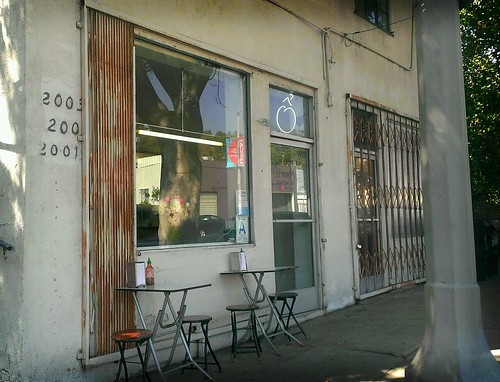 Storefront[/caption] It was a Saturday afternoon after a morning of Pilates followed by procrastination, and I was in need of a snack. I craved the sort of snack that could double as a quick, reasonably priced lunch. As with most things, however, you risk quality in favor of expediency and price. And then I read Twitter. [caption id=“” align=“alignright” width=“320”] 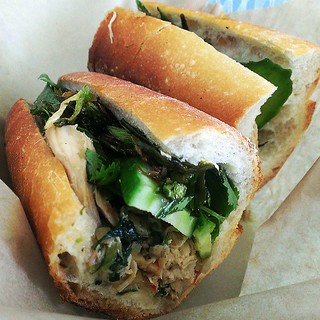 Lemongrass Chicken Banh Mi[/caption] Enter Lesley Balla’s (@lesleyLA) tweet, one that recalled a post she made on Zagat back in February on O Banh Mi in Silver Lake. As I often do to write, I had already planned to head to Silver Lake. Perfect. After scrambling out of my workout clothes, I drove up Hyperion. I parked on a side street as the house numbers approached the right one and set out on foot…only to walk right past the foliage ensconced O Banh Mi. But who could blame me? This daily, lunch-only spot serves up some pretty tasty Banh Mi for $7.50 per sandwich – a price you wouldn’t compare with those sold in Westminster or San Gabriel Valley, but should consider a steal for such a quality product right in Silver Lake. Thin, crispy French baguette framework, check. Signature veggie-meat combinations, check. Prime meat-to-vegetable-to-bread ratio, check. Accepts only cash for O.G. Asian hole-in-the-wall status, check. As a first sandwich, recommended selections included their best seller, the Lemongrass Chicken, or the Cold Cut Trio. Salty-umami seekers will want to order the Banh Mi with sardines. And at the top of my bucket list: Returning on a Friday afternoon, the only time they offer Pig Roast Banh Mi. Fresh Talent’s got a great photoblog on what goes on there. Lesley also has a report on the custom pig box in which they roast their weekly pig. (Sidenote: Apparently, they unexpectedly forwent their pig roast last week in favor of pork meatballs. Not a bad substitute.) Got an afternoon when you’ll be in Silver Lake? O Banh Mi is the place to be – if you can manage to find it.