No Way, You're Kidding!

In Munich, we were recommended to go on Mike’s Bike Tours to see the city. You essentiallyÂ follow Mike, or one of his counterparts, around the city on bikes for 4-5 hours and he has a little talk on the significance on the major sights. Since it was rainy at least 3 out of the 5 full days we were there, we had a packed schedule on sunny Saturday–the day immediately before we were scheduled to fly back to Los Angeles. I felt it our duty to visit Dachau, one of the notorious concentration camps during Nazi rule, because you just couldn’t come for Oktoberfest, drink up and have only a merry ol’ time at a festival … and completely ignore the tragic memory of a people who was at one time destined for extermination a few miles away. I couldn’t do it. While reading Oktoberfest history, I learned that the festival was actually canceled from 1939 to 1945 due to World War II. (More on Dachau later.) 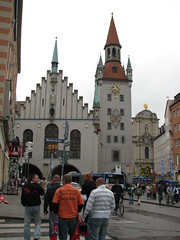 So we did Dachau in the morning and rushed our way back to the clock tower at the Rathaus at Marienplatz, the meeting place for Mike’s Bike Tours. They were to meet there at 12:30 for about 15 minutes to get the tourist schpielen on it before leaving to get bikes. Due to the bus schedule and irregular S-bahn schedule, we got there at 1pm, huffing and puffing (not to mention we were a little ambitious about it because Dachau is a little bit ways out). Luckily, Roycifer looked at the brochure he picked up for the tours, and it happened to have a map of the location of the office in relation to the meeting place, which is where they were to walk next. We followed the map–by running–and found the office empty; thankfully, the girl who was there was able to call one of the tours and tell them that there were “2 more coming,” and instructed us on how to get to the garage. Again, we ran. A guy set us up with bikes and then took us to meet the first stop on the tour–where one of the groups still was. Cool. We were set. 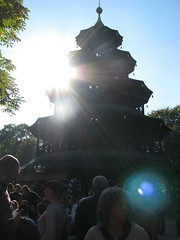 Our tour guide was from Hawaii and the people on the tour happened to be mostly American. I met some Chicagoans, some Joiseyans, some Brits … and of course some Californians. There were a group of three girls, actually, who somehow made it known that they were from Californ-I-A by the time we joined up. The lunch stop was at the Chinesischer Turm, which means “Chinese Tower” and it overlooks the second largest beer garden in Munich. It was our second time drinking HofbrÃ¤u WeiÃŸbier but this time, we were determined to try the edible goods–of which there were many. And the bratwurst and spare ribs were delicious. So was the dill-sour cream sauce that was on top of our potato wedges. Mmm. That sauce. Those ribs. That bratwurst. The beer. Mmm, sauerkraut. Before I tell you more thoroughly about my Oktoberfest experience in another post, let me summarize about the beer by stating some facs: my 5’4” 120-lb frame drank almost 4 beer steins (1 beer stein holds over 2 pints, btw) in about 8 hours, yet I didn’t get sick or have a hangover the next day. Yes, that Bavarian beer is special. 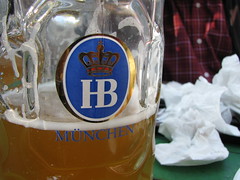 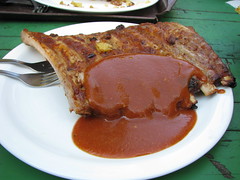 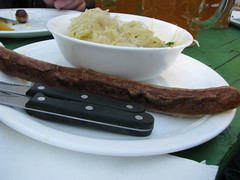 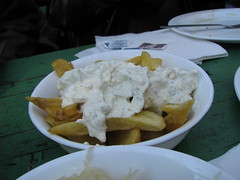 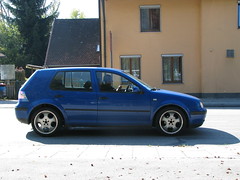 Nice rubber sidestrips. After lunch, we “happily” got back on our bikes. At one point, a group of us in front (yeah we’re nerds) paused to wait for those behind us to cross a street together. I noticed I was next to one of the “girls from California.“I tried to initiate some friendly conversation by smiling at her and saying,

“So where in California are you from?”

She says, “Southern!” and smiles back.

“Nice, wherearound? I live close to the Beverly Center.”

And she goes on, “I actually hate L.A.” and scrunches her nose ever just a tiny bit.

I, too,Â paused a tiny bit. Then, I cocked my head & widened my eyes. I exclaimed while still smiling, “Oh my gosh, really?? I actually hate Orange County!!”

I mean, I have to give her some credit for her capacity to harbor all that hate. I, too,Â spend all the hours of my days thinking about how much I hate Orange County that whenever somebody mentions “Orange County,” “The O.C.” or “Laguna Beach”Â that hate for the group of cities surfaces to the forefront of my mind. The traffic lights at 8-laned intersections that never turn green even when there’s no one crossing the intersection.Â The only beaches in Southern California. [ ;) ]Â The orange-skinned mother-daughter pairs shopping Fashion Island in matching Juicy Couture sweatsuits and matching Miniature Schnauzers. The surfer bro fans of Jack Johnson, the most talented musician to ever live.

However, I’m not even so sure that I might volunteer that information the first thing I said to someone I just met from that region.

Munich. Bringing the world together. Feel the love…