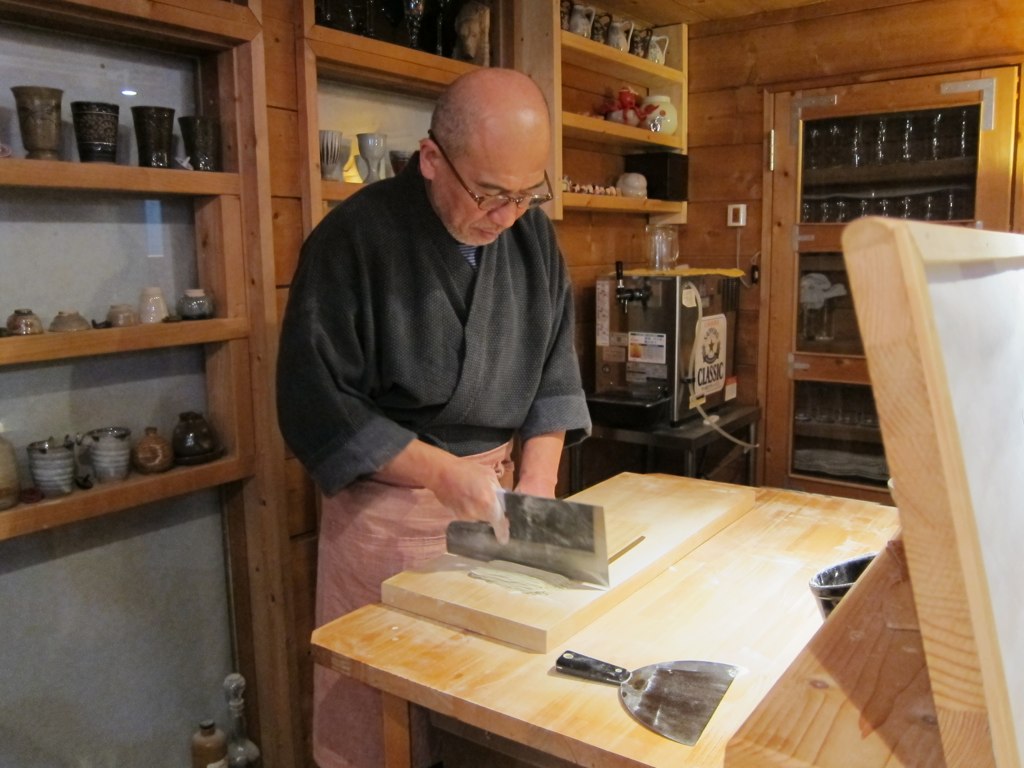 Soba Master and Owner of Rakuichi[/caption] We were closing out an epic week of snowboarding and skiing some serious powder in Niseko, Japan, when on our last night we visited Rakuichi, the 12-seat kaiseki restaurant at the foot of Annupuri resort. During lunchtime, I hear Tatsuru and Midori Rai have quite a queue as they keep service strictly to soba. While absolutely every plate was pristinely and passionately prepared, soba was definitely the centerpiece of our multi-course dinner. 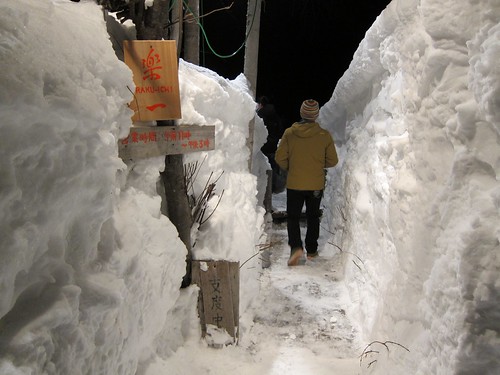 The entrance to this little tucked-away gem built anticipation as it was. It snows in Hokkaido, Japan’s northernmost island, more than anywhere else in the world - without exaggeration. So we were a week in, essentially in this winter wonderland with snow embankments higher than 20 feet everywhere we looked. This little restaurant, built entirely with wood, was constructed with the owner’s own hands. There were hallways of snow and a bridge to get to the place. When you enter, there’s a coat room for your boots, shoes and coats, and in traditional Japanese fashion, pairs of slippers for all the guests to wear. Now my crew of 10 were warm, settled and fashioned with slippers in this cozy, bar-seating-only dining room, ready to eat. (Woe to the 2-top who cancelled last-minute. They definitely missed out!) [caption id=“” align=“aligncenter” width=“500”] 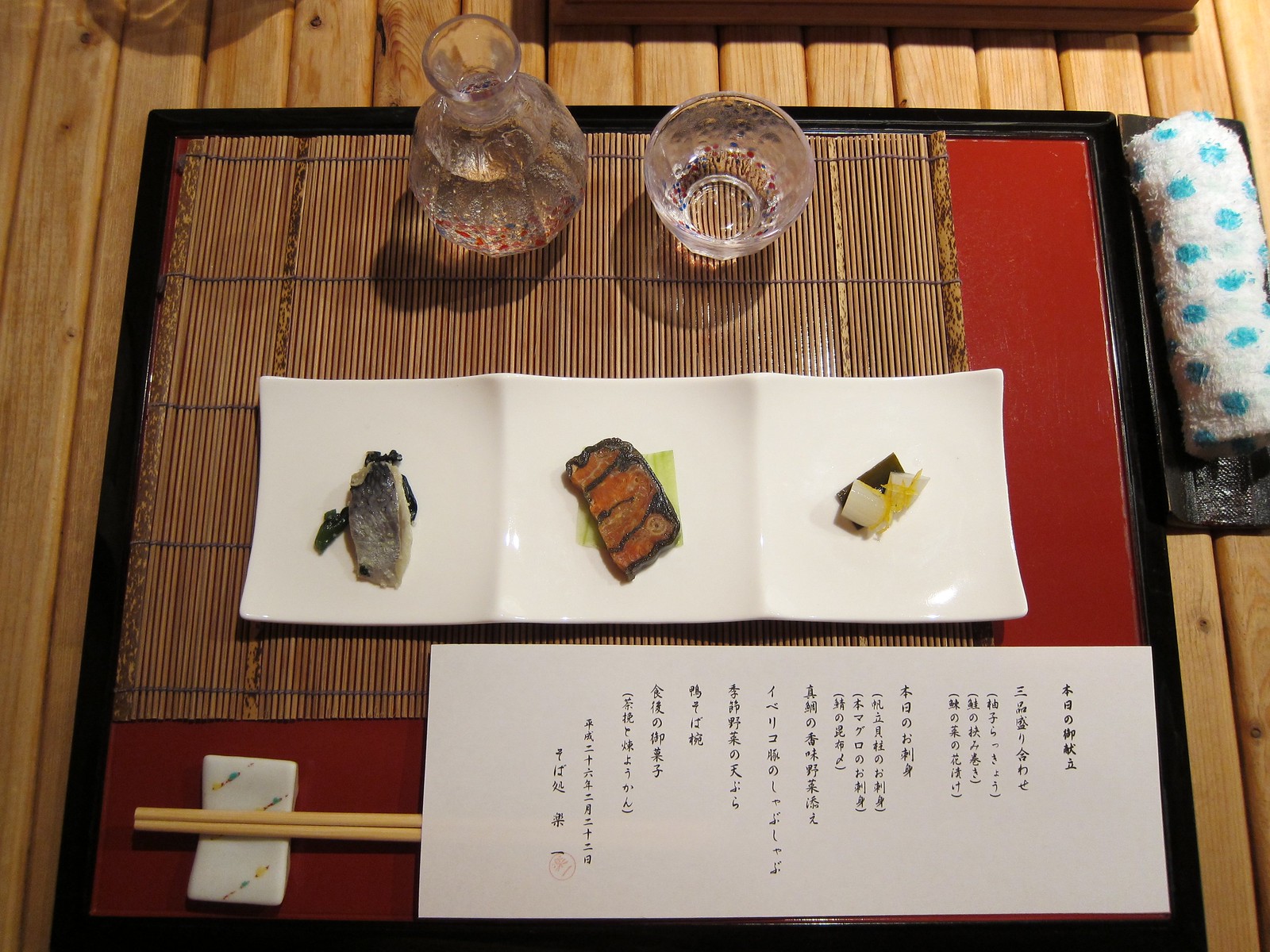 Appetizers[/caption] We started with a beautiful sake from Shikoku, the smallest and least populous island of Japan. And then came tiny appetizers from Japanese pickled shallots to cured salmon and seaweed and herring. [caption id=“” align=“aligncenter” width=“500”] 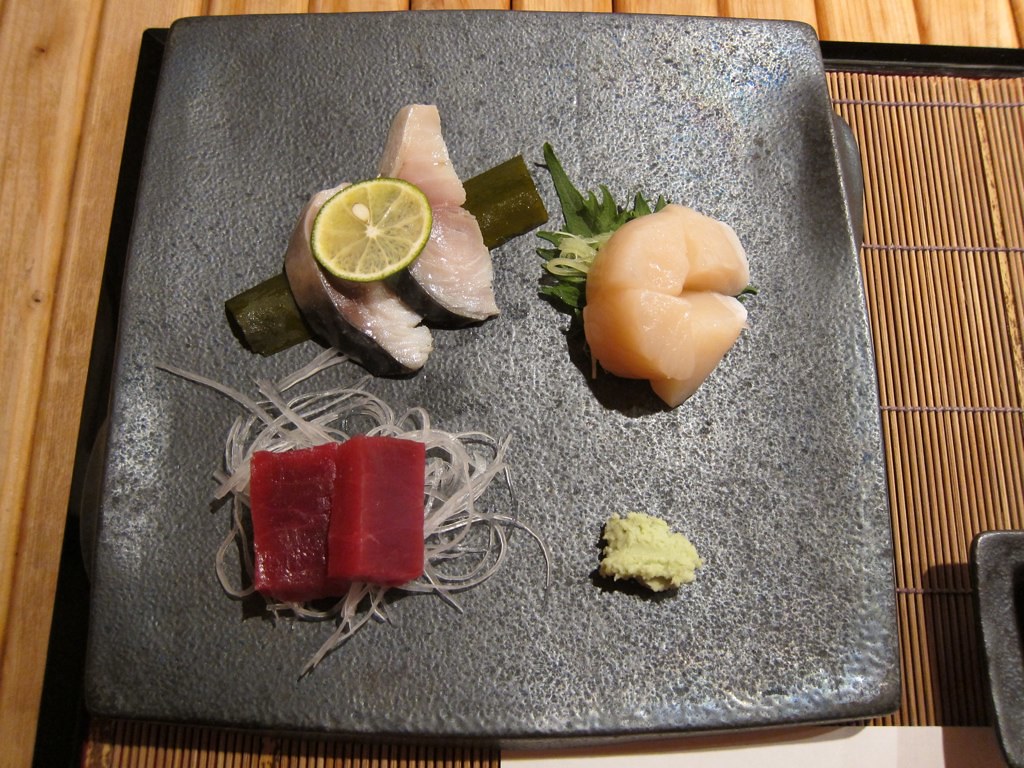 Cured Mackerel, Scallop, Tuna[/caption] We moved on to a sashimi trio of cured mackerel, scallop and the deepest colored tuna I’ve ever seen in my life. I will rave about the soba, later on, but I can’t emphasize enough how this sashimi was just so heavenly, so fresh. For the third course, we had thinly sliced seabream, topped with Japanese ginger, daikon shoot, soy, yuzu and shiso – an amazingly vibrant couple of bites to savor. [caption id=“” align=“aligncenter” width=“500”] 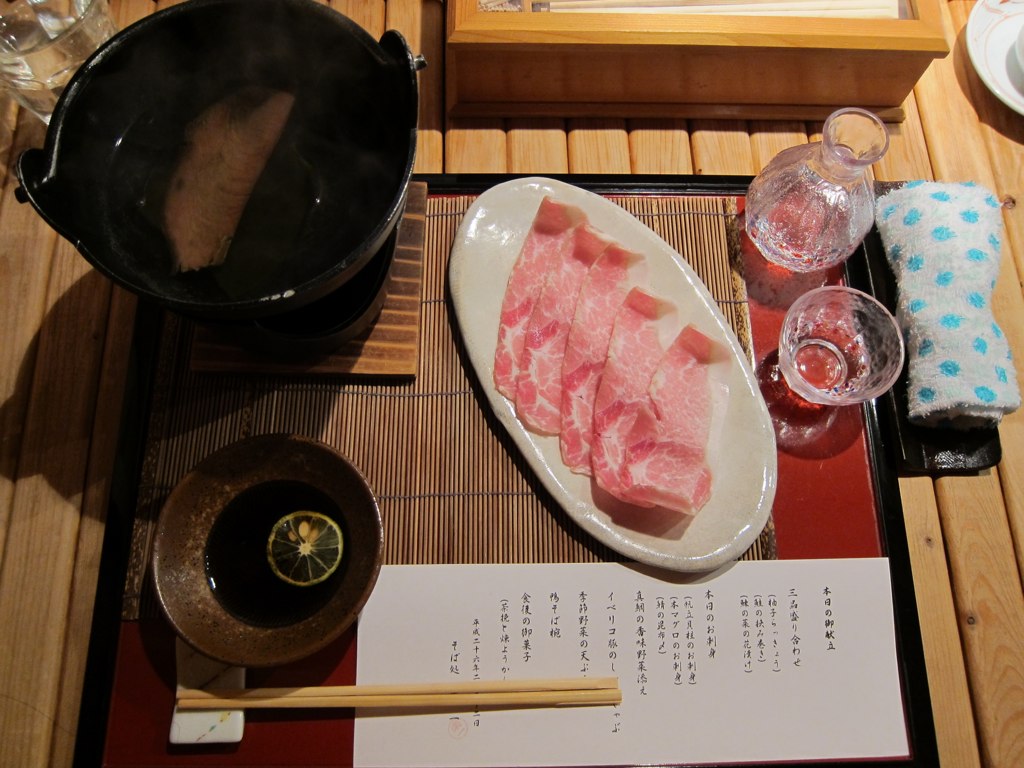 Shabu Shabu with pork[/caption] And then, they brought out small pots so we each could enjoy our own little shabu shabu, featuring ultra-thin, but beautifully marbled, slices of pork. We were instructed to submerse each slice a mere 10 seconds each in the bonito and konbu dashi, then dip in briefly in ponzu before eating. So good. So comforting. Warm water was distributed so we could take sips of our broth before it was bussed. [caption id=“” align=“aligncenter” width=“500”] 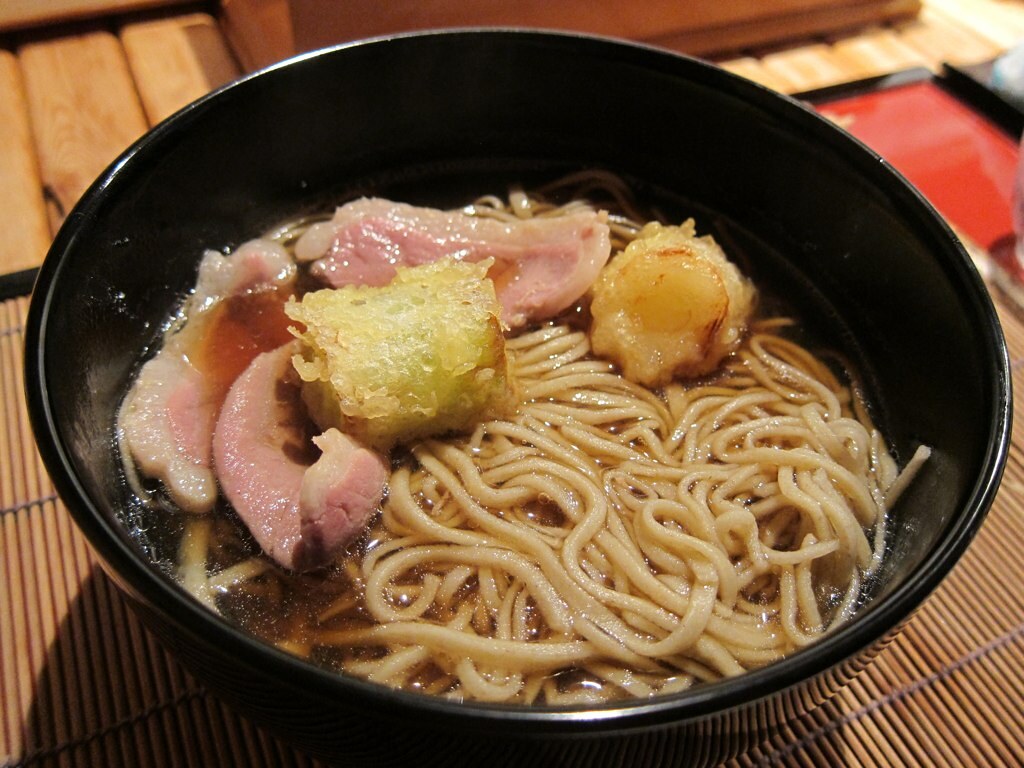 Soba Noodles, Duck with broth, Green Onion Tempura[/caption] The “intermission” of sorts came in the form of perfectly fried vegetable tempura. So light, so fluffy – and so fresh. The breading was perfect. I describe it as an intermission because it was while we enjoyed our veggies that the Soba Master and owner of Rakuichi began making our soba noodles. [caption id=“” align=“alignright” width=“180”] 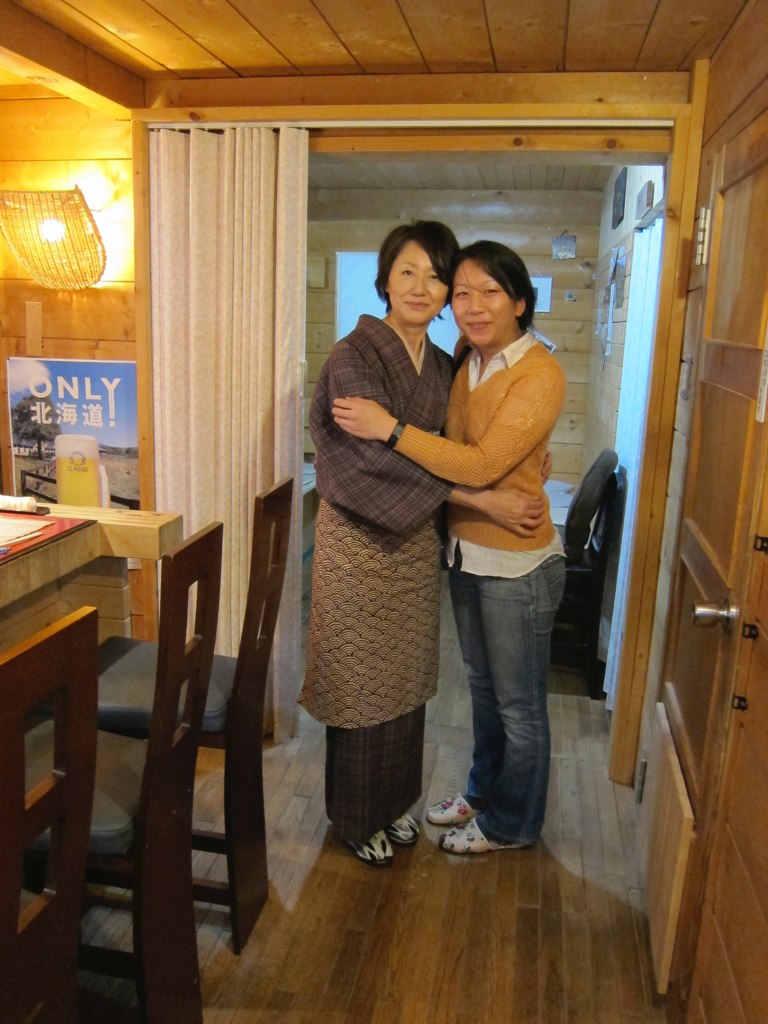 Midori Rai and Me[/caption] From kneading the buckwheat dough to rolling it out and finally, cutting it. I alternated between pieces of veggie tempura and taking paparazzi shots, it was so intriguing. I had taken a soba making class before, but of course, he did it in 10% of the time I took with his own 100% buckwheat recipe. The noodles were submerged in just enough duck broth, topped with duck slices and green onion tempura. The bowl was incredibly succulent yet clean tasting; I quite frankly didn’t want it to end. We ended with a couple of simple, green tea and red bean jelly cubes – a final point on an epic meal. It was only then that I noticed the owners’ picture with Anthony Bourdain on the wall. Though Rakuichi was on No Reservations, it took us reserving our seats over 2 months in advance to eat here. Your Japanese speaking friend will need to do that, too. But it was so, so worth it. With sake at only $75 per person, it was a steal. And there is no tipping in Japan. When considering snow destinations for next year, it will be very hard not to go back to Niseko… P.S. - Credit goes to a Miss Katie Powell for making the reservation here - and also for basically planning our entire time in Niseko. [caption id=“” align=“aligncenter” width=“500”] 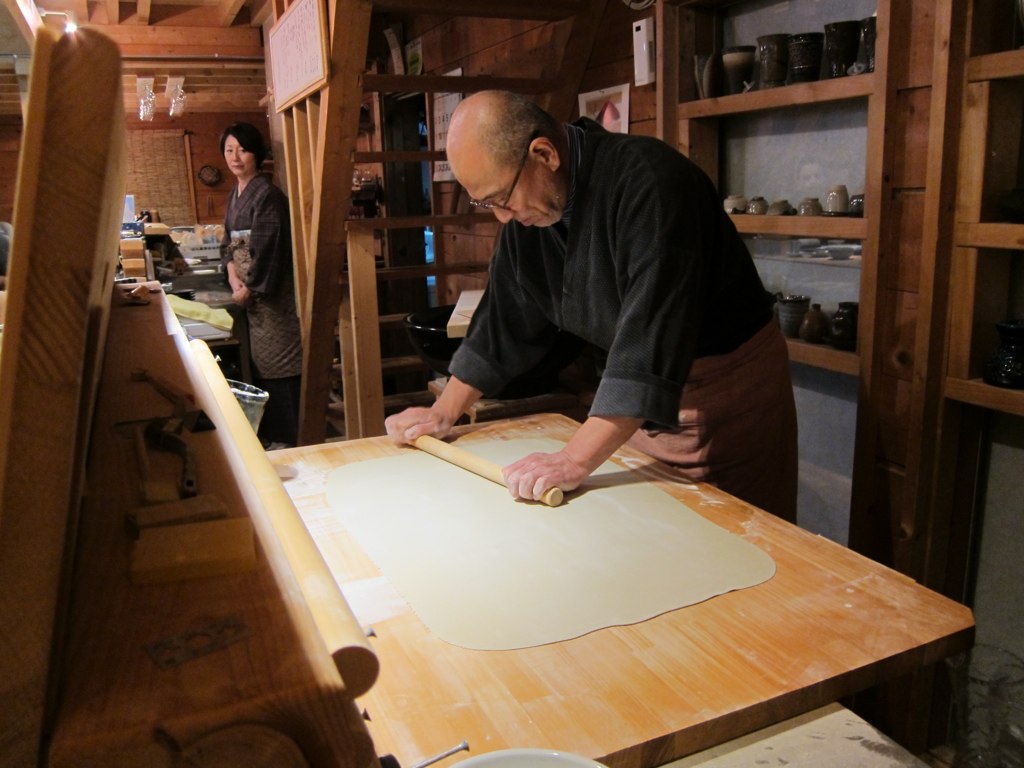