Who and where’s your NFL team playing this weekend? Just when I thought I had no reason to watch since the Packers are having their bye week, 25 Degrees’ PR shoots me one of these. Whether you’re eyeing the $2.50 PBR (you can tell me later) or the half-off their other beer selection of Miller, Stella Artois, Guinness, Hef and Amstel Light - I’m curious myself to try the buffalo and spicy soy bbq wings that aren’t normally on their menu. Nor the chili cheese fries, that is. One thing I do know is that I’ve always loved the tiny, french-cut french fries at 25 Degrees so we’ll see how their chili and cheese are.

I know what you’re thinking - too bad the burgers aren’t on special. I’ll make this easy for you - a burger is probably what you should be ordering, whether on special or not, anyway. Also, the Guinness Milkshake. So yes, this is just a ploy to get you in there to watch the game. But at least I’m honest. Anyway, I’ve been growing a second stomach, lately! Nothing’s off-limits!

I got an update on pricing. See below for the damage: 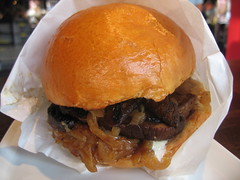 Just look at the bun…