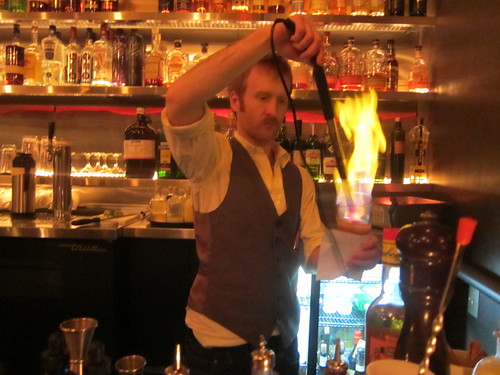 [/caption] I couldÂ spend a whole week inÂ New York and not get to all the restaurants and cocktail bars on my shortlist. But Booker and Dax was one of those do-or-die bars and well, I’m just glad that I made it back to the East Village on my last night on the island. [caption id=“” align=“alignright” width=“240” caption=“Lady of the Night (Reposado tequila, tomato water, horseradish, sriracha, worcestershire)”] 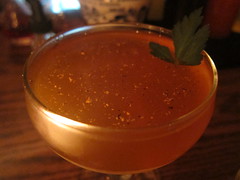 [/caption] They’re flashy cocktails, but not purely for showman’s sake. (And what a show they put on.) These cocktails are, most importantly,Â delicious - and thought-provokingly so. With Momofuku Milk Bar shuffled across the street for this few months-old cocktail bar, a torch, centrifuge and carbonating-shaker-contraptions (as they are scientifically called) are found on the same counters once occupied by crack pie and cereal milk soft serve machines. Booker and Dax isÂ a collaborative effort by David Chang and Dave Arnold with the latter bringing his brand new methods to the table. [caption id=“” align=“alignleft” width=“240” caption=“Liquid nitrogen application”] 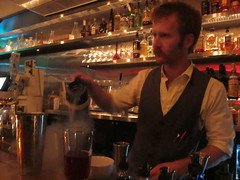 [/caption] The resulting cocktail menu is one that can be divided into fifths. That is: Bubbles, stirred, shaken, on the rock and Red Hot Poker. And if you’re interested in what you’re drinking in the least, you best be sitting at the bar if only to witness the wizardry of the process. For instance, if you ever thought water and ice was enough to chill your glass whilst the bartender makes your cocktail, think again, because onlyÂ liquid nitrogen does the trick at Booker and Dax. The Lady of the Night was effectively a liquid Bloody Mary - one to be enjoyed all times of the day. Horseradish tincture is in the cocktail, which was created by first muddling fresh horseradish with vodka and then re-distilling it. Sriracha essence? Basically the liquid resulting from centrifigual force enacted upon the infamous rooster sauce. The result was a Bloody Mary full of clarity. No pulp to be found - just all-out flavor. [caption id=“” align=“alignright” width=“240” caption=“Bangkok Daiquiri”] 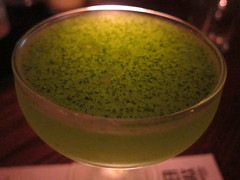 [/caption] Of course, I had to see the Red Hot Poker in action, so I ordered a Friend of the Devil, or what I’d call aÂ ”Torched Boulevardier,“Â made withÂ rye, campari, sweet vermouth and pernod bitters. As I was curious if the alcohol might be burnt off as a result of the torching action, Sother Teague reassured me that each cocktail is indeed made with more spirits to compensate. Served in a ceramic cup, the resulting cocktail was warm andÂ comforting with a touch of carmelization to taste. And itÂ was strong. A super simple but delicious cocktail my friend Greg ordered was the Bangkok Daiquiri, made with white rum, lime and Thai basil. Unfortunately, I didn’t get to try any of the cocktails made with carbonation but was lucky toÂ witness a fellow guest’s cocktail getÂ shaken. She assured me thatÂ it was carbonated and delicious. Next time, New York. Next time.