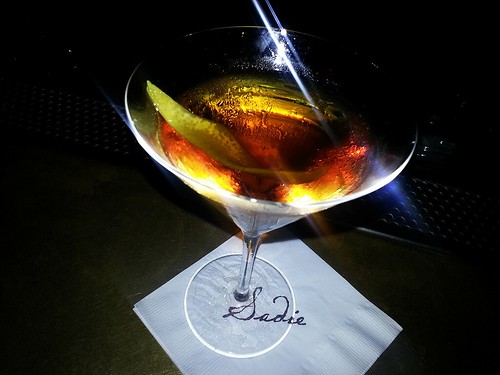 The Combination - Chivas 12, Italian Vermouth, Pear Syrup, Toasted Pecan Bitters[/caption] Since the weather, yet again, is doing nothing to evoke anything the least bit autumn, there are four new cocktails at Sadie in Hollywood that will do it, themselves. Forget that we’ve yet another heatwave (alas, in November) and let Giovanni Martinez’s new creations take you to a place where the leaves turn colors and the air smells crisp. And your taste buds find a new appreciation for cognac… [caption id=“” align=“alignright” width=“240”] 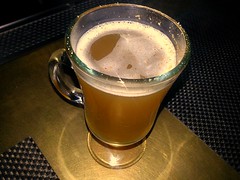 Spiked Cider[/caption] Go back to the 1920’s with The Combination, named after the alliance between politicians, the police and the underworld, that ran L.A. for decades. It’s a delicious blended Scotch cocktail made with Chivas 12, Italian vermouth, pear syrup and toasted pecan bitters that is as strong as it is smooth when it travels down your throat. The subtle pecan notes give it a nice finish. The Brass Rail is for those who want something perhaps a little lighter yet just as flavorful, with citrus accents. Made with Blackwell’s Jamaican rum, Martell Cognac, lemon juice, lemon clove syrup and allspice dram, it’s quite the fall rum punch - super easy for drinking thanks to its artfully balanced lemon components. And it’s not really a fall cocktail menu without a hot toddy or a season-appropriate fruit cocktail. The Spiked Cider fits the warm drink bill quite nicely thanks to a heated mixture of Martell Cognac, freshly pressed apple juice and spiced syrup. I loved that it was a departure from your usual whisky hot toddies, as the cognac really gave it a whole new depth. The light cinnamon garnish, coupled with the spices in Gio’s syrup, brought me back to a fall where there’s charcoal and a chill in the air. [caption id=“” align=“alignleft” width=“240”] 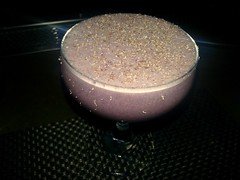 Black Flip[/caption] The Black Flip was my other favorite (a three-way tie, here) - because while I love egg whites, I love whole eggs even more. That is, when it’s done correctly. Made with lots of blackberries, spiced syrup, port, Bulleit Bourbon, egg and nutmeg garnish, this is one of those drinks that go down so easy because it brought the autumn fruit of blackberries a savoryness. It’s a better time than any to have fresh blackberries in your cocktail, and the flavors and texture of the cocktail are really brought out by the layer of nutmeg. It’s a great time to visit Sadie to try their new selections this season - you’re bound to like one - or more - so much that you may have to repeat. Couple them and a few of the favorite Sadie cocktail mainstays on the menu with a few appetizers (like fresh oysters on the halfshell), and I’m easily in heaven. [caption id=“” align=“alignright” width=“150”] 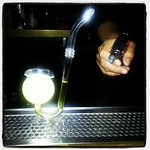 This is Not a Pipe[/caption] P.S. - I’d be remiss if I didn’t mention the special, now only 5-served-per-night This is Not a Pipe cocktail you may have heard about on Grubstreet. I first saw these things at a pretty happenin’ Pernod Absinthe party and of course, Gio couldn’t let these awesome things go to waste. As for the cocktail he came up with to go in it: I’ve had it, and it was thick, creamy and subtly sweet, and it was wonderful. Gio torches it at the base so it’s heated up just enough to get through the thin vessel and into your awaiting mouth. One thing’s for sure, though - you’ll definitely want to save it for last. Made with Galliano, Frangelico, rum, cocoa cream and an egg yolk, there’s no question that it may as well be dessert.