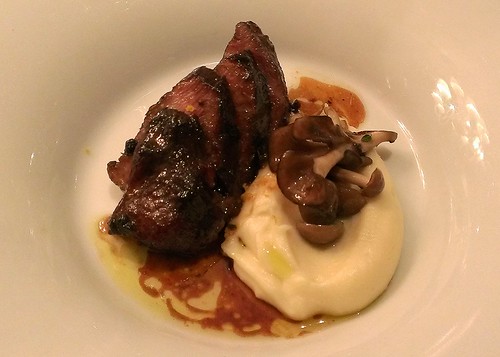 Braised Beef Cheek, Taleggio Pureed Potatoes, Chanterelles[/caption] Happy Martin Luther King Day! Also, what a joyous second inauguration day. In this case, it also means the very first day of dineLA Restaurant Week. If you haven’t, already, you best be making your reservations right now - or better yet, take advantage of your day off and find your prix fixe destination for lunch today. I’ve done a bit of perusing the incredibly extensive list of restaurants and their offered menus around the city and came up with a few categories that struck me. With 3-course prix fixe as the standard, here are some standout menu offerings the week starting today, Monday, January 21 - Friday, February 1: Best Opportunity to Try New Chef at Venue Not new chefs by any definition (in fact, the tenure of this group is impressive especially by L.A. standards) - just new venues.

I associate my first experiences with potted rillettes, headcheese and pates in L.A. with Remi Lauvand, and he’s now at Le Ka, having just opened last September. Downtown workers can get their feet wet on the $25 lunch menu, but interesting dinner menu items include escargot cavatelli, lamb’s tongue and scallops with lentils and chicken skin - some things that may be too good to pass up.

With Vartan Abgaryan now serving at a venue in possession of one of the most enviable patios in Silver Lake, I can’t help but simply displace the delicious plates he was just serving at Public Kitchen & Bar and imagine them enjoyed in outdoor dim lighting surrounded by foliage. Sure, he’s changed up a few things, but I’ve always been a fan of his octopus.

Just a week ago, IDG’s RivaBella just started serving dinner in its brand-new, 8,000 square foot space, basically the antithesis of Angelini Osteria. You’ll have to settle for lunch if you want to do Restaurant Week here, but if Gino Angelini’s pasta (such as a green pappardelle in ragu) is part of the 3-course offering, that will always do. 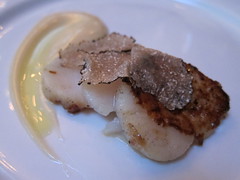 Restaurant Week may be a good opportunity to catch Hostaria del Piccolo’s newest location in Venice. Plus, they may be the most consistently solid kitchen to offer dinner at the lowest price point.

The flagship restaurant always expands its $45 menu to 5 courses (over the traditional 3 everyone else employs) during Restaurant Week. Given how delightful a time I have whenever I dine at Piccolo, I’d say this is a steal.

I love Blue Plate on Ocean Avenue, but ordering at a fresh seafood place usually requires some self-discipline over concern for your wallet. My advice is to focus, and the lunch Restaurant Week option is the deal you want. Here’s a secret: A half-dozen oysters on the half shell and a lobster roll is what I’ll be having today after I do some cat-sitting. While the dinner menu is $45, the only addition you’ll get is dessert - not so much a steal. (By the way, no reservations are accepted, so be ready to wait your turn.) 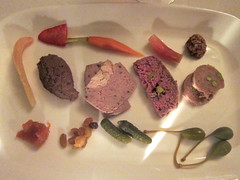 The Art Deco-industrial mashup of a renovation at Caulfield’s has a great feel and even nuance, so you’ll want to check that out. But what will keep you there is the food. Stephen Kalt has a way with meats, so omnivores will especially be pleased with the wide range of flavors on the menu. Plus, the dinner menu is expanded to four courses; take note of more bang for your buck. More flavor for your funds. What have you.

I love the kitschy, homey feel of Philippe Starck-designed Tres. The beet salad is a new, and delicious, addition to the menu and available as an appetizer. The most overlooked dish is probably the Jidori Chicken, which comes with a generous, juicy portion of perfectly cooked bird. The beef cheeks (above) were super rich but delicious, so good luck on your decision. 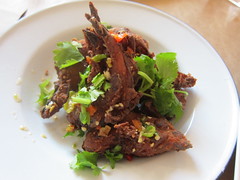 Bring friends, because you’ll need each other for support during this family-style Thai dinner by Kris Yenbamroong. Probably the biggest departure from any other menu available for dineLA Restaurant Week, Night + Market’s menu will reward adventurers many times over with a rice, larb then curry and noodles course (don’t forget the nam prik supplement). The flavors aren’t just atomic for the sake of it, they are out of this world.

You essentially are saving $10 on lunch or $13 on dinner for this all-you-can-eat, Brazilian meat extravaganza. Chains aren’t all bad; they’re reliable, if nothing else. Enough said.

So make your reservations now, and while you’re out there, remember some tips and practice basic dining out etiquette. Make your reservations for during the early part of service, not the peak. Try to go during the weekday instead of the weekend to avoid the crowds and relieve the pressure on your servers. Tip based on the full value of the meal - inevitably a higher value than is offered in these menus. And since the menus are all available online, maybe even have your selections early to help your server out. Bon appetit!