More of Michael Voltaggio at The Dining Room, The Langham Pasadena 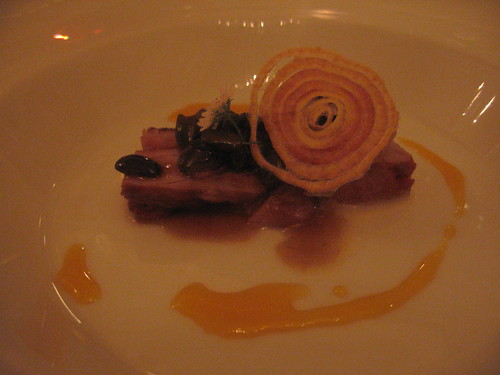 Michael Voltaggio embodies brave, bold cooking. There is no doubt that at the other end of the meal, your palate will have changed, been expanded and ultimately a different palate than before. It will be one more open to new ideas.

Just a glance at the tasting menu I had the privilege of enjoying blows my mind - even now. The media dinner was held at The Dining Room inside the Langham Pasadena, which can boast being the only hotel-operated restaurant with a Michelin Star. Also present were TaraMetBlog, FoodGPS, EatingLA, My Last Bite, Lindsay and Julie of LAist - all of whom helped make this dinner such a rollicking good time. By then, Chef Voltaggio’s tenure as Chef de Cuisine was only 3 weeks old. It was here where he felt he’d be given the freedom to express his creativity however he should choose. And it’s quite the setting in which to do so. The Dining Room isn’t an oceanfront restaurant, nor is it in a mecca of food experimentation. My guess is that it aims to fill that niche inside Pasadena.

In about a month, The Dining room will undergo a renovation which should at least help to bring it up to speed with the modernity of the cuisine that is now served inside it. Voltaggio is also accompanied by a very confident sommelier, Matthew Lathan, whom I thought did an excellent job with the pairings.

But the food. Pastrami pigeon? Octopus over a bed of buttered popcorn paste? Pacific yellowtail over soy-watermelon? What??!! 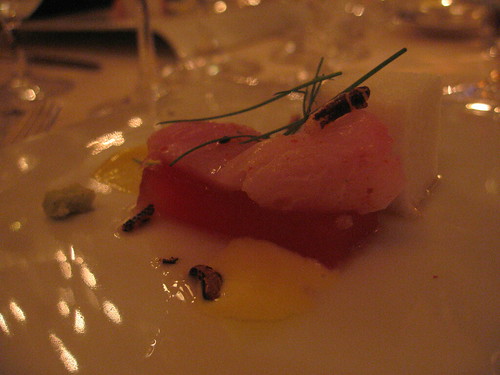 Okay, I have had that before - at Hatchi. Actually, not really. Apparently, it had been modified from Hamachi to Pacific yellowtail - and I now had Matt to inform me that the watermelon had been cryovacked with a soy infusion. I thought the salty-sweetness of the watermelon was so interesting with the clean-yet-full-tasting yellowtail. It was just as refreshing as but even more interesting than the Hamachi version at Hatchi. 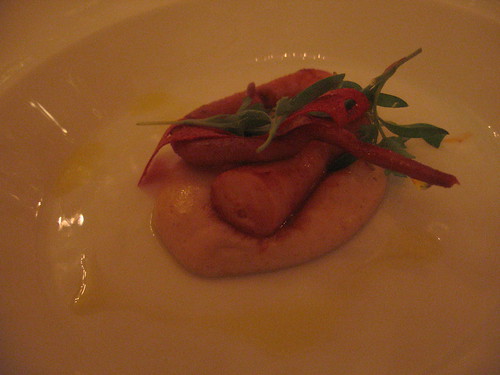 Oh yes, I’m serious. That paste under there is a buttered popcorn-flavor. Novelty? Yes. Bold? Yes. Mind-blowing? Yes. Overpowering? Yes. I kind of threw my hands up at this one because first of all, the octopus actually tasted delicious but was difficult to really enjoy because I actually thought the paste was overpowering. But the paste was interesting in and of itself so … what do you pay attention to? All of it. You had to - lest something pass you by. 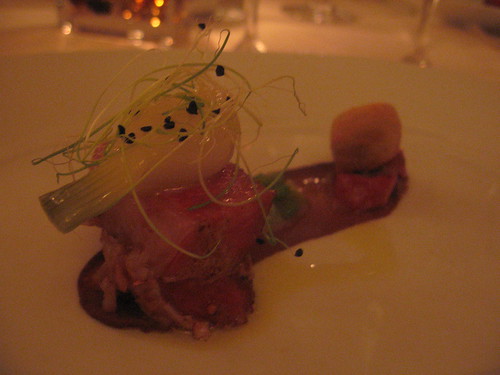 The lamb confit was sous vide with curry inside. I especially enjoyed the pickled tongue - but had trouble placing the fried ball of hummus as a part of the dish. The lamb itself, however, was a treat with so many different flavors cryovacked into a flavorful tiny couple of bites. Paired with this was an interesting 2006 Villa Creek Avenger, which was a Syrah/MourvÃ©dre/Grenache from Pasa Robles - an interesting, beautiful wine that complimented everything that went on. 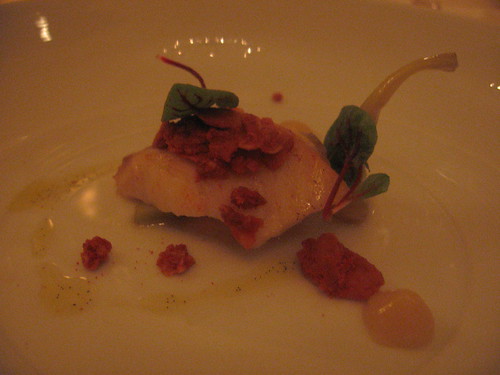 I have to say that of all 8 dishes served the entire night, I enjoyed the fish the most. The turbot was no exception. Complete with artichoke, and tomato granola -Â  I really liked what was going on. Turbot’s delicate flavor was complimented by the drizzles of lime & vanilla - also, a rich but subtle piece of artichoke heart. And really, tomato granola? The fact that one could make tomato crunchy was pretty amazing to me - as if the sun-dried tomato was too common and/or didn’t have enough texture. 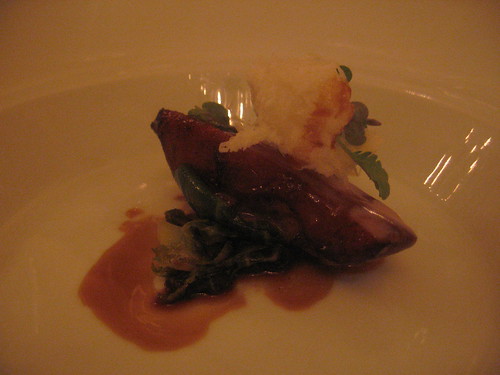 First of all, this was the only dish which was paired with a beer - that being a Unibroue 17-year vintage strong dark ale. This was probably my favorite pairing of the night. What a delicious beer!! Indeed, the squab was of a salty pastrami flavor and the crazy puffed gruyere was the part of the dish that made me do a double-take. Puffed cheese! What the heck? Because it didn’t taste like cheese, anymore. The pigeon was just packed full of flavor, and didn’t taste gamey at all. Overall, this was a lucious pairing.

And as for dessert - not a simple coffee cake. 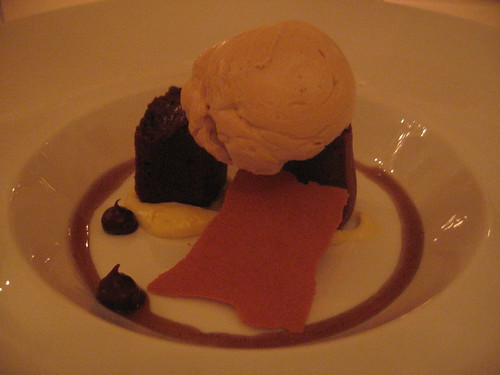 I thought the lemon curd was perfect with the coffee cake. Nothing like a little bit of tart to go with the rich sweetness of a coffee cake. TheÂ  remarkable thing was again the pairing. Matt paired this dessert iwth a 2004 Paringa Individual Vineyard sparkling shiraz. Yes! A sparkling shiraz! It felt luxurious on my tongue yet I had no idea such wine existed. A novelty, sure, but it suited well.

This was an absolutely wild meal. It took me on loops, turns - these dishes are not for people who don’t like to think. But my palate really ended up all the better for it, and it was great to experience firsthand the results of molecular gastronomic techniques I had only read and heard about. What a talent Voltaggio is and what a journey he can take you on! I’m excited to see he and his brother compete in the newest season of Top Chef!