Moqueca: A Piece of Brazil in Oxnard 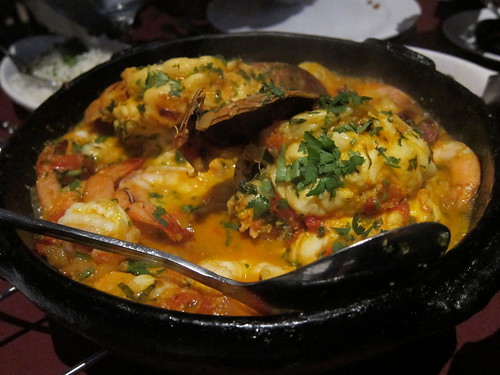 We came from wine country having made a total of five stops at Santa Ynez wineries and a tasting room and were ready to feast. Bill of Street Gourmet, Fiona of Gourmet Pigs, Josh of Food GPS and I were on a Foodbuzz-sponsored trip celebrating Javier, the no-longer-Teenage Glutster and food blogger who had finally turned of legal drinking age. 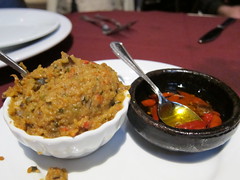 Bill had tipped us off that Moqueca in Oxnard was one of probably only two places Stateside (the other on the EastÂ Coast)Â that served the traditional Brazilian stew - so the anticipation was brewing, as was our need to soak up the vino we had been consuming all day. When we arrived at the restaurant, located on the second floor of a plaza in view of the marina, I could smell the complex spices in the air and immediately started salivating.

Moqueca was near capacity this Saturday night. Bill impressed us with his Portuguese (“Brazilian women are hot,” indeed), whereupon it was decided with the chef that we would order a cod appetizer, three stews and a side of plantains for us five to share. Crostini topped with an eggplant spread or peppers in olive oil were our prelude. The salted cod, which broke our fast, was delicious and had a good, cakey-yet-moist consistency inside.

Not too much later, clay pots came to us boiling and red, and we immediately dug into the one containing lobster and shrimp - lest our precious seafood continue cooking in the stew and lose its tenderness. Of course, none of that diminished the fact that by now, we were starving. [caption id=“” align=“alignright” width=“240” caption=“Plantaines”] 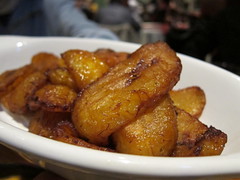 Served over a bed of rice on our plates, the lobster and shrimp were perfectly cooked and as a component inside the stew, packed a ton of flavor. As a seafood lover, I think there are few things better than almost-sweet crustaceans served spicy. The other pot, which contained the same broth but with mahi mahi and angel shark was also incredibly delicious. The filets were perfect - firm enough to avoid dissolving into the stew yet still tender to the fork. Bobo de Camarao was a broth that is thickened with yucca - and at our table it was served with shrimp. It was good but I preferred it without the additional starch, though it came impressively blended and integrated with the stew. 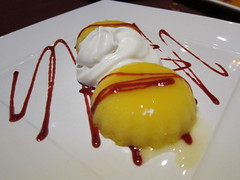 The Quindim (coconut-egg custard) was firmer than I expected and decidedly more coconut than egg. It was good,Â as was the Brazilian flan - which was also firm.Â I noticed that all three desserts we got were very subtly sweet and had rather mild flavors, which is a refreshing take on dessert itself. I often find things too sugary and cause for a hard crash later on, so I appreciated the three we tried that night.Â My favorite dessert, however, was definitely the Passion Fruit Mousse. It was light yet packed a huge amount of authentic, potent passion fruit flavor with none of the artificial cantaloupe coloring I’ve seen so many passion fruit-flavored things with.

Moqueca may be in Oxnard, but I would propose that if you are looking for a unique, comforting dining experience featuring stew incorporating perfectly-cooked seafood - the hour-long drive is worth it. No longer can our ignoranceÂ pigeon-hole the Brazilian food experience into chain churrascarias; after all, this stew has existed for over 300 years. Get into it. 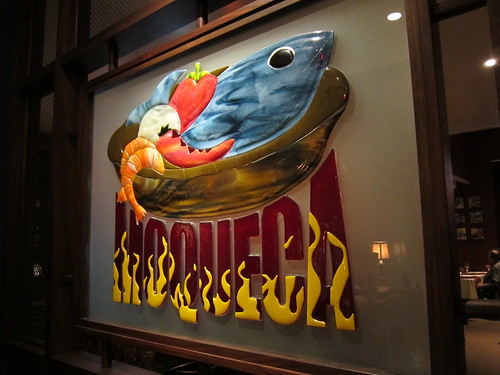