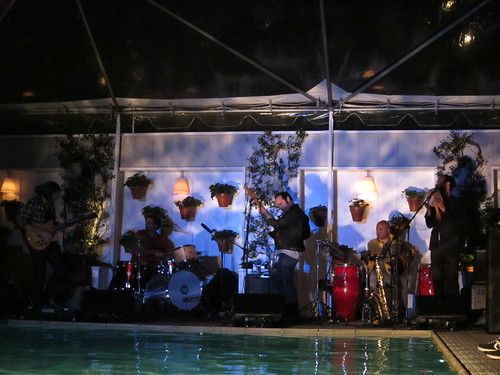 [/caption] Last week, I fortunately caught on Kevin Bronson’s Buzz Bands blog that LA-based Afro-pop group Fool’s Gold was playing at Skybar at The Mondrian for a free show. Sure, Arcade Fire was playing a surprise show the same night - and people had started lining up for tickets the night before - but that whole …shebang… was just not my bag. It was Skybar and I had no trouble getting in. There were no sexagenarian gentlemen with appletinis and womenÂ half their age. In fact, it was a rather mixed crowd with a casual vibe. My Jameson, neat, was still $14 - no surprise - but more a product of The Sunset Strip than the fault of The Mondrian’s.Â This collaboration with IAmSound could mean that Skybar could be on to something and perhaps evenÂ turning a new page. Fool’s Gold sounded great. With the exception of Surprise Hotel and Poseidon, the 5-piece (for the night, anyway)Â played all new material for over an hour. I was a wondrous hour filled with electric melodies - and lyrics in Hebrew - floating over African beats and rhythms. Saxophone, flute, bongos, guitar, drums - it really doesn’t get any more “world music” than this. I was surprised well everything was mixed. So check out the dates for bands to come - including the awesome Dum Dum Girls tomorrow. It’s free - and all you have to do is email Mondriansessions@morganshotelgroup.com to RSVP. Word is, theÂ Lykke Li date is practically booked - but if you love her Swedish pop soundÂ enough, it may be worth a try.