We’re all familiar with our favorite stands and spots at the Farmer’s Market at 3rd and Fairfax, a Los Angeles landmark that dates back to 1934. As we fast-forward and look at the space beginning the 21st century, much hasn’t changed in awhile before the Dupars remodel. Short Order and Short Cake just recently became the stalwart newcomers for the last couple months (and with good reason). [caption id=“” align=“alignleft” width=“240” caption=“Mixology101 360Â° Bar”] 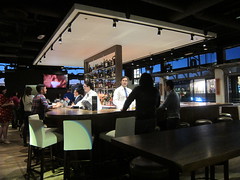 [/caption] Now, there’s a new kid on the block, and her vibe is a luxe, open-air space accentuated by sleek and simple design lines and a centerpiece 360-degree bar. Staged across from Zara and Cafe Marmalade, the bar has potential to play host to a vibrant, pulsing energy. The only thing that would make the scenery prime is if the bar were maybe just one level up (didn’t you know - The Grove parking lot has some of the best sights of the city). But all of this barely matters, because you still get the view of the original clock tower and more importantly, cocktails by Salvatore Calabrese and helmed by his conductor, local expert barsmith Joe Brooke. [caption id=“” align=“alignright” width=“180” caption=“Breakfast Martini”] 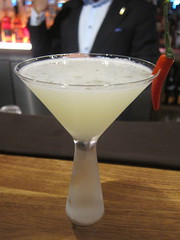 [/caption] In short, yes - go for the House Martini. It’s one of the best martinis you’ll ever have. It’s so cold while achieving the perfect dilution (see above video) and made perfect in no small part due to the frozen glass and spirits. Another gin go-to would be the Breakfast Martini, made with Bombay Sapphire, Cointreau, fresh lemon juice and orange marmalade - a signature drink from 1997 that may immortalize Salvatore in the cocktail world. It’s just jammy enough thanks to the marmalade (an ingredient inspired by Salvatore’s wife) but not not too sweet. And of course, you’ll have to order your own to see if it actually tastes like breakfast. Spice lovers won’t be disappointed by the still-elegant Spicy Fifty, made with Stolichnaya Vanilla vodka, elderflower cordial, fresh lime juice, honey syrup and chili pepper. [caption id=“” align=“alignleft” width=“180” caption=“Farmers Martini”] 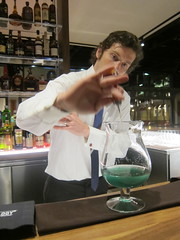 [/caption] But the true signature cocktail of the menu would have to be The Farmer’s Martini, made with frozen Stoli Elit, blue curacao and Salvatore’s bitters & champagne. I can’t say I’ve ever had much of a blue cocktail since I’ve left undergrad - but while it’s not my favorite, this one is legit and, together with the Spicy Fifty, has me perhaps reconsidering my prejudices against vodka…maybe. And for those who are secretly or not-so-secretly craving a girly drink will have to pony up (personally or not) for the $18 Hollywood Bubbles, a Champagne cocktail made with Benedictine, fresh raspberry puree and pomegranate juice. Though I might be quick to judge on looks alone, Bubbles actually packs quite the berry punch. Mixology101 also serves bar food, though it decidedly carries less emphasis as it all fits onto the last page of the menu - after Salvatore’s bio. But really - if you were aiming to really eat, you’d go across the way to Planet Dailies. [caption id=“” align=“alignright” width=“240” caption=“Exterior patio”] 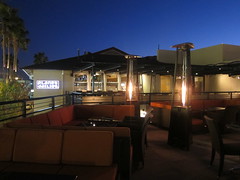 [/caption] It’s an exciting time to be at The Original Farmer’s Market. People don’t have to flock there purely on account of old favorites anymore and now have reason to make new ones. Though their location is right by the Farmer’s Market, you won’t be finding a lot of housemade syrups, as that’s a variable to contend with from batch to batch. Mixology101 focuses on using modern (not to be confused with gastronomic) methods to make the classics. But it’s clear that Joe Brooke seems happy to be exactly where he’s at, under the tutelege of a world-renowned mixologist and continually learning. With Short Order around the corner and offering quite a different style and selection of cocktails, it becomes clear: Cocktails of all kinds will be a new pull to the Original Farmer’s Market. We’ll just have to deal with the early call times.