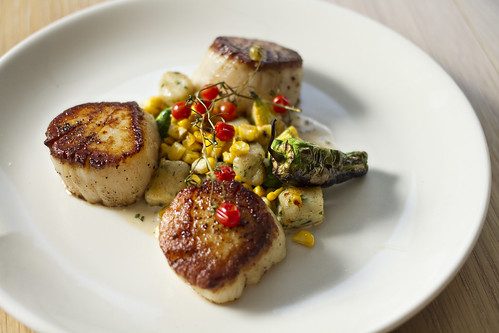 Seared Dayboat Scallops, Smoked tomato, Corn succotash, Gnocchi, Sherry Champagne Sauce[/caption] I didn’t think much of the space just south of The Greek Theatre when Louise’s, the trattoria chain, occupied the space. It was little more than a place-marker for street parking for those summer concerts. It marked the start of the ascent up Hillhurst from Los Feliz Blvd., the alternative to the stacked parking cattle call that was the official Greek parking. [caption id=“” align=“alignright” width=“240”] 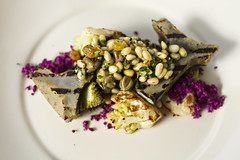 Romanesco, grilled artichoke, Pine nut gremolata[/caption] But the space itself dates back to 1929 and has housed a ton of Los Angeles history (Willard’s Chicken Inn, Brown Derby, Michael’s of Los Feliz and The Derby in conjunction with Louise’s). With Louise’s occupation, though, it was a pedestrian precedent. In terms of interior, Rob Serritella was spot-on to re-expose and repurpose the original steel beams and wood. Despite its vast square footage, the remodel achieved a contemporary yet location-appropriate ambiance inside. In terms of sheer restaurant size to community, I make comparisons with what Mohawk Bend became to Echo Park, though MessHall feels more intimate in no small part due to the lower ceilings. The family-style menu by Keith Silverton is manageable & well provisioned for the kitchen. Case in point:  There are more varieties of Bourbon offered than food items (awesome). Eight taps of interesting American beer thanks to Karen Grill. The cocktails, upon having tasted half of them, hold their own in imagination and execution thanks to Eric Lund. [caption id=“” align=“alignleft” width=“240”] 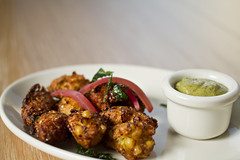 Smoked Corn Fritters[/caption] It is clear that Los Feliz is all the better thanks to MessHall, which is fully embodying what it’s like to come into a neighborhood as a favorite - north of the main drag of Hillhurst, at that. The neighborhood is now elevated past the point of merely filling a vacant space. Maybe even call it a revitalization (or unwanted gentrification perhaps), as a result. Farm-to-table can be so cliche, but it can also be personalized. Well aware of the dangers of becoming a parody of itself as many gastropubs have become, I was truly surprised by the food. The scallops were fresh, flavorful and seared perfectly. The Romanesco with grilled artichoke, in this rendition, had me thinking it’s the new cauliflower (which I believed was the new Brussels sprouts - but really, it IS a variant of cauliflower). I’ll now be looking for them at my local farmer’s market. And the Smoked Corn Fritters, which came with poblano & pumpkin romesco, were a delicious smoky flavor on the outside yet sweet on the inside. But the true test, really, was the Steak Tartar Tacos. I love steak tartar and will order it if it’s offered, so I did notice that at MessHall the presentation and tartar itself were exceptional. It came encased in a crunchy parmesan taco shell, which added a delicious, tangy-cheesy flavor and crispy texture to the raw steak mixture. So good. Even LA Weekly thinks so: Steak Tartar Tacos at MessHall - LA Weekly Squid Ink”). [caption id=“” align=“alignright” width=“240”] 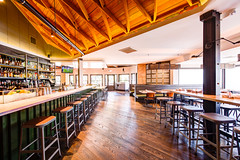 MessHall Bar & Dining Area[/caption] Since I was out of town for the opening, I did notice the incredulous tweets that came back about the $21 Maine Lobster Mac ‘n Cheese. It ended up being something I avoided ordering as a result, but I have to say that with as many good starters that ended up coming out of the menu - down to the Kale Caesar made with avocado and goat gouda - the higher-priced shared plates are something you can do without. The one that we did order, the Hog Chop ($26), was flavorful, tender, and accompanied by some tasty white cheddar grits, mustard greens and Tabasco butter. One could complain about the most expensive item on the menu being the scallops (3 to count) at $28, but it’s also worth mentioning that those were probably the largest scallops I have had in a long time and they came with a mighty tasty corn succotash and perfect gnocchi. The burger, with slow onions, cheddar, pickles, smokey sauce on top of brioche - with fries? That will have to wait til next visit. [caption id=“” align=“alignleft” width=“240”] 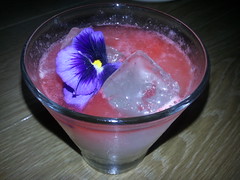 The Hallucinogenic Whimsies of Banana Man[/caption] And the cocktails? I’d just as easily drop in at the bar for a couple of Eric Lund’s creations. I started out with the M.H.O.F., their solid Old Fashioned made with small batch Bourbon, which was a good signal that I could go on. They did well with their singular vodka drink called Amanda, which was hardly girly due to the serrano, cilantro, lime and pineapple in the cocktail. The few menu classics we tried included the Brown Derby with Buffalo Trace and Jack Rose with Laird’s Bonded Applejack - they were both really delicious on their own as well as complementary to the food. And the Mint Julep is pick-your-own-bourbon, which is a great way to take advantage of that selection. As for the originals, try the Hallucinogenic Whimsies of Banana Man - an Campo de Encanto Pisco cocktail made with Absinthe, banana, lime, orgeat and Peychaud’s. It’s an awesomely balanced drink whereby the banana curtails any sort of licorice aftertaste people are used to with absinthe. It strange when you find an absinthe cocktail that goes great with starter food. [caption id=“” align=“alignright” width=“240”] 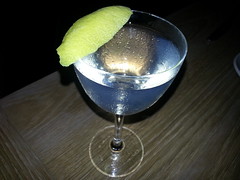 A (Real) Martini[/caption] If you want boozy, real martini drinkers will appreciate A (Real) Martini. Because if you thought you were going to get asked “vodka or gin,” you’ll find MessHall is also in the business of schooling you. It’s appropriately composed of London Dry Gin, dry vermouth, bitters, lemon twist “and faith.: The Destroy All Erik Lund, my closing cocktail of the night, almost destroyed me. This boozy cocktail made with Smith & Cross, gin, Benedictine, Regan’s orange bitters, Cherry Morlacco and lime zest was delicious but in that really hairy way. Boozers will love this one. Probably the only thing I thought curious about the ecosystem was the soundtrack, which seemed to be include KCRW’s playlist from 2008 intermixed with very obvious classic rock hits. The rest of Los Feliz - when listening to the radio at all - is listening to KXLU. The flannel-wearing servers are part of (yes, I’m going to say it:) hipster protocol, so for the most part, the ambiance is on track for a community that has thrived on the “neighborhood spot” model for so long. While it’s easy to underestimate the dangerously diminutively named MessHall, it succeeds by bringing the quality to food and beverage that nobody really expected. And yes, Los Feliz is all the better for it. All food and drink were hosted.