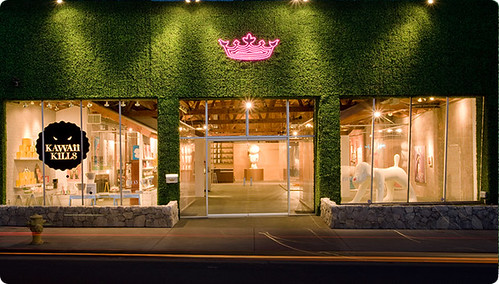 [/caption] The power duo is back - and they’re bringing back more options than ever to the Culver City cosplay cafe called Royal T. Chef Joseph Mahon and Sommelier David Haskell have expanded their thrice popped up pop-up to … you guessed it, three nights, starting onÂ Sunday, April 17Â and ending on Haskell’s 35th birthday,Â Tuesday, April 19th. Mahonâ€™s French cuisine will be paired with Haskellâ€™s sake, Asian beer, and French and Italian wine selections. Choose from the five ($62), seven ($80), or ten-course menu ($118) with optional wine pairings ($45-92 additional) - orÂ go for theÂ special uni menu and separate wine pairings on Tuesday, April 19 in celebration of Haskellâ€™s 35th birthday (The Feast LA). Magnum is working in collaboration with Tomo Kurokawa to donate a portion of the event and silent auction proceeds to benefit the Japanese SakeÂ AssociationÂ and subsequently sake breweries affected by the tsunami inÂ northern Japan. Courses will include thoughtful selections such as:

All wine, beer, and sake pairings will be announced the day of the event viaÂ Magnum and Royal/Tâ€™s Facebook and Twitter pages (@Magnum_dh and @RoyalTCafe). At the bar, small plates and sake pairings will be available throughout the three-night series. Inspired by Royal/Tâ€™s newest street art exhibit â€œFACEMAKER, the bar bites will reflect graffitiâ€™s free-form streaks, which include:

Everything sounds absolutely delicious. Pop-up restaurants may come and go…and come and go…but this bigger and badder rendition of MagnumÂ looks like one not to be missed. Be sure to call or email to reserve. Zeus The Cat will be standing by. Also, be sure to check out the items up for silent auction, which are constantly being updated on Twitter and on the official Magnum website.