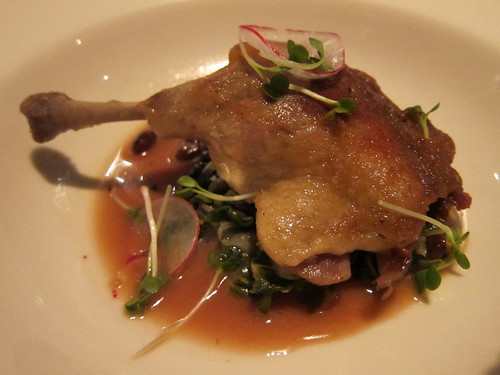 [/caption] Pop-ups are an oft-occurring phenomenon these days, but just because the concept is novel doesn’t mean the execution always is. My experience with pop-ups range from dinners with emphasis left on the setting and ambiance, to the exclusivity the secrecy of the event brings. Truth be told, I’ve rarely tasted food that matched up to my steadily decreasing expectations. [caption id=“” align=“alignright” width=“240” caption=“Coconut Soup, Mussels, Tapioca, Cilantro Pistou, Lime”] 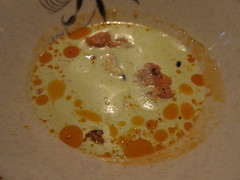 [/caption] Yes, it’s a hard deck to deal. Diners can and should expect hiccups to occur in kitchens unfamiliar to the chef - par for the pop-up course, that is. And that’s when things like pacing or even the overall length of the meal can go awry - like that one dinner party I was at from 7 PM to 12:30 AM. When you sign up for a pop-up dinner, don’t schedule anything afterwards unless your dining hours are extra early. And that was the rule I broke at the debut of Magnum, Chef Joseph Mahon and Sommelier David Haskell’s pop-up session at Neil Kwon’s Biergarten in the unlikely Koreatown. Well, I was fulfilling an airport pick-up favor (beggars can’t be choosers), and even after my 7 courses of deliciousnessÂ my guest’sÂ wait was more thanÂ bearable. Impressive. The carrot pudding with orange granita and shaved peanuts was a beautiful amuse. It even packed a little punch - thanks to an unbeknownst-to-me ingredient - and effectively made me eager for more. I found myself devouring the following coconut soup, with mussels, tapioca, cilantro pistou and lime - and even some of Aaron’s (thanks to his Kosher-like diet). But I couldn’tÂ appreciate the soup as much as I did without Haskell having paired it with a surprisingly acidic-for-a-junmai-daiginjo (made with 50% polished rice) -Â Wakatake “Onikoroshi”. It cut the spice in the soup so well yet was smooth enough to make it all go down like silk. Delicious. [caption id=“” align=“aligncenter” width=“500” caption=“Cured Salmon, Pickled Cabbage, Cucumber, Daikon, Kimchee Broth”] 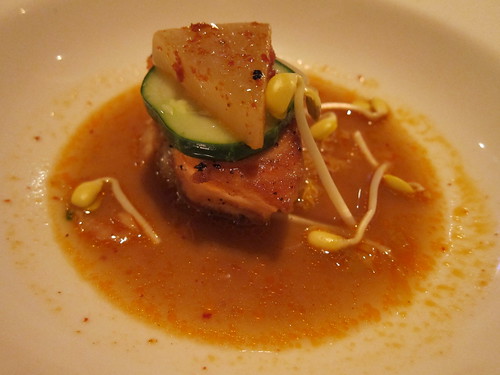 [/caption] Another one of my favorites had to be the cured salmon, with the fat of the fish cut by the spicy kimchee broth in which it stood. The really refreshing notes were brought by the sprouts and cucumber, and the softness of the daikon matching the tender salmon really well. Haskell paired this dish ingeniously with Alesmith’s Nautical Brown Nut Ale. Yes! Beer! The dark ale really grounded this course out by offsetting the spice, fish and veggies. [caption id=“” align=“alignleft” width=“240” caption=“Haskell and Nguyen: Fond of each other”] 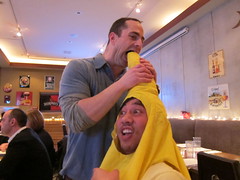 [/caption] There’s no question that David Haskell really knows how to pair his food. But as far as expertly-prepared food in and of itself on Joseph Mahon’s part, the table’s (and my) favorite dish was hands-down the duck confit. It had a richness and texture that was just perfect to the taste and touch of the fork. But that doesn’t mean that the pairing was any less inspired. The 2008 Pithon-Paille from Bourgueil, France, made with Cabernet Franc grapes, was amazing in that it tasted rather flat by itself - but when sipped with the duck confit, it was the perfect wine to cut the richness of the duck. And that whole picture makes for a beautiful pairing. When I joined Aaron (SavoryHunter) and the Starry Kitchen duo (Nguyen and Thi) for a reservation this special night, I had an inkling that the Who’s WhoÂ in LA foodÂ would be there - but not nearly to the capacity and fervorÂ that came about. Nguyen fulfilled Haskell’s request and wore his banana suit during dinner, and endless tables of bloggers were seated throughout the dining room, near and far. It was a successful and festive pop-up night, with many leaving while wondering where Mahon and Haskell will go next. So stay tuned…!!