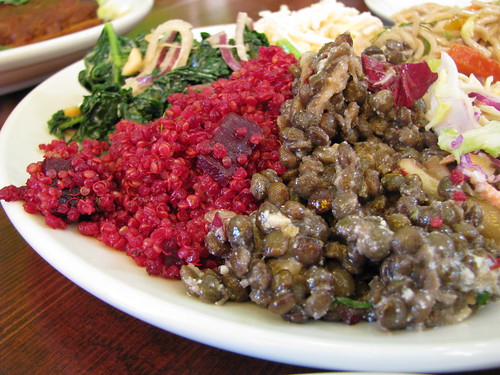 [/caption] All good things - that require discipline - come to an end. That is, in my case, anyway; I had dabbled in Macrobiotics all but a week a few years ago before deciding that my palate wasn’t committed and my budget wasn’t copious. It’s not as if I didn’t agree withÂ the basic theories behind the philosophy - as opposed to the new-ish fad diets such as Atkins or South Beach. Yin and yang, salt and sweet. Good and nightshade grains. Macrobiotics, no doubt, introduced me to my affinity to quinoa - even if it took some acclimation in the beginning. Enter that one-off shopping trip I had made to Erewhon way back when. I had spent $100 yet when I got home, it seemed as though I had barely bought anything at all. My yoga teacher and friend HillaryÂ had confessed to me that her financial planner had stressed that she and her husband “must spend less on food” - and they were the most hardcore advocates of M CafÃ© I had ever known. [caption id=“” align=“alignright” width=“240” caption=“Organic cut-fries with nori, shiso & sea salt”] 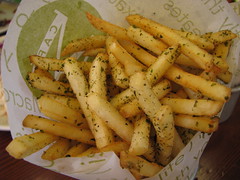 [/caption] The good news is that M CafÃ© - starting with the Beverly Hills location - has made a recentÂ effort to meet the affordable price points of today’s healthful vegan and macro-foodie. What’s undoubtedly a response to the market of today, menu items on average came down by $2-3; Javier of Teenage Glutster and I were invited to sample the goods of their new, accessible “Little m” menu. First of all, I cannot sing enough praises about their organic fries. I am actually thinking they are the best “salted” fries in the city - with a mixture of nori (seaweed), shiso and sea salt and simultaneously not tasting nearly as salty as any other fries I’ve ever had before. Perfectly crispy and perfectly sized, it was truly a revelation. The sweet potato fries are also perfectly seasoned with chili, sea salt and lime. If you’re into the sauce thing, the beet-red organic ketchup is impressive as is the spicy yuzu mayo. The great thing about the fry selection is that M CafÃ© stays true to the original while making an effort to put an imaginative spin on things given the Macrobiotic requirements. The focus of our lunch was the deli salads (title picture) that are available at M, which also happens to be how most diners enjoy the restaurant during the day. Depending on availability, you can get a 2 serving selection for $7.45 or a 3 serving selection for $9.75. There wasn’t a salad I wasn’t impressed with. Fresh kale was perfectly seasoned and dressed, the scarlet quinoa had such a unique flavor that was appetizing yet didn’t hide the taste of the grain. The lentil salad was deliciously hearty and the salmon salad tasted fresh andÂ had good bite (thanks to the perfect amount of celery)Â with a good, “creamy” consistency. [caption id=“” align=“aligncenter” width=“500” caption=“Wild salmon salad, Curried tempeh salad, Dilled organic tofu salad”] 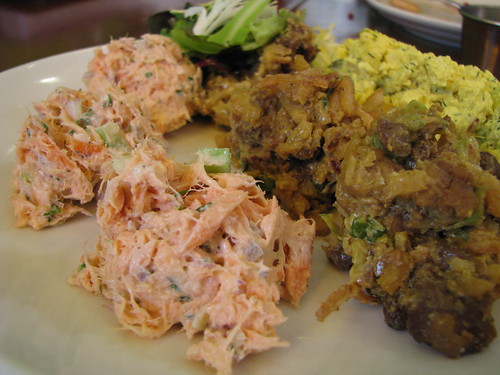 [/caption] I thought the consistency of the finely-chopped tofu in the dilled organic tofu salad was rather impressive - appropriately dense and the dill flavor was particularly refreshing in combination. The tempeh was also good - a salad that appeals to a slightly anti-microbiotic, sweet tooth like their other tempeh items. The “sweet” flavor here is justified by its description as BBQ. One of my favorites was the sesame soba noodles with the noodles made in-house and tasting extra fresh with great bite. The sesame flavor was nice and subtle - even a bit more complex than its simple description. A nice surprise. Additionally, there are new menu items such as the breakfast burrito, bento box and combinations like the Big Macro meal ($11.95, includes Big Macro burger, fries and lemonade) and soup and sandwich combo ($7.95, includes soup and a half-sandwich). The Curried tempeh deli salad and wrap as well as the sweet potato fries are new and only available at the Beverly Hills location for now. Eventually, M CafÃ© will expand the aforementioned options to the other locations on Melrose Ave. and in Culver City. [caption id=“” align=“alignleft” width=“240” caption=“Chocolate cake”] 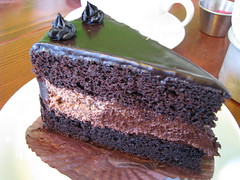 [/caption] The desserts were also solid, with my favorite being the chocolate cake - a dark slice (as most vegetarian and Macrobiotic chocolates are) that was still moist, not tough nor too dark.Â M Cafe’s spin on theÂ carrot cake was the most healthful-tasting version I’ve ever had - and perhaps for the first time this meal, thatÂ was alsoÂ its downfall (try Veggie Grill’s, instead).Â Good was the tirimisu, which had more cinnamon than I was used to, but had the right consistency and was a certainly delicious rendition. Especially given the lower price points and confirmed suspicions that M Cafe’s food is not only freshly made with quality ingredients but also absolutely delicious, I will definitely be byÂ on another lunch date to graze on their amazing salads. All aforementioned food was hosted.