Lunch at POT Moves to The Line Hotel Lobby 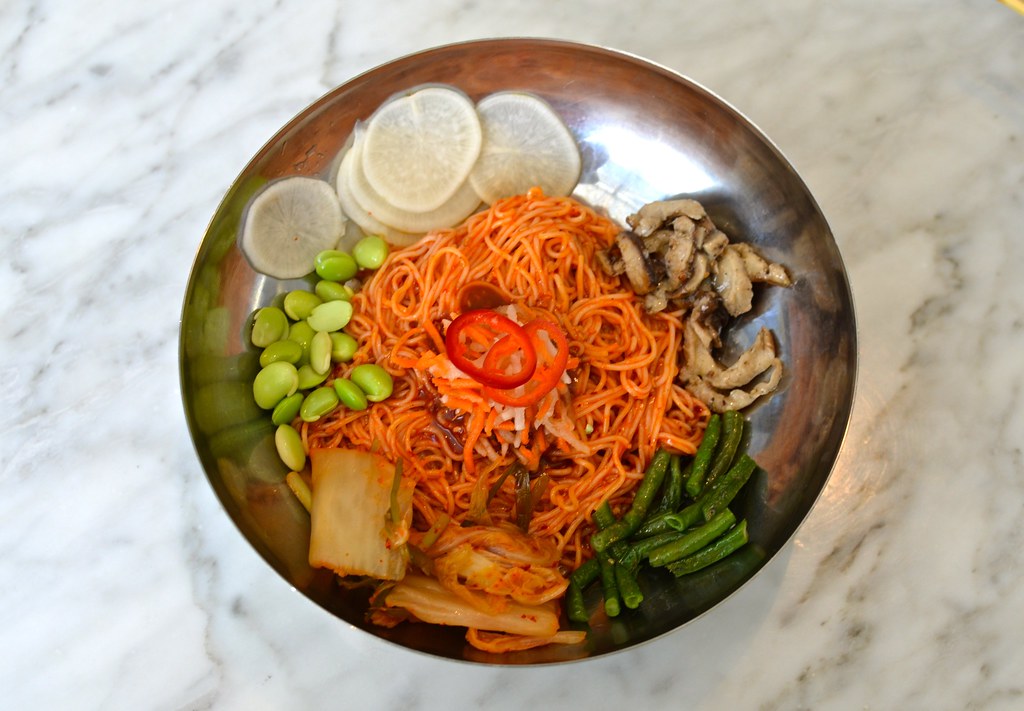 Noodle of the Day: Bibim Gooksu (chilled somen noodles, bibim sauce, vegetables)[/caption] With the migration of lunchtime at POT to the lobby of The Line Hotel in Koreatown, gone is the enclosed, smoky and cavernous setting that we’ve come to know as the Korean restaurant experience. In the daytime, anyway. It’s a smart move, to be sure, more conducive to the power lunch, and the menu is nonetheless a delightful range of authentic to hybrid, but always tastefully imaginative. [caption id=“” align=“alignright” width=“1024”] 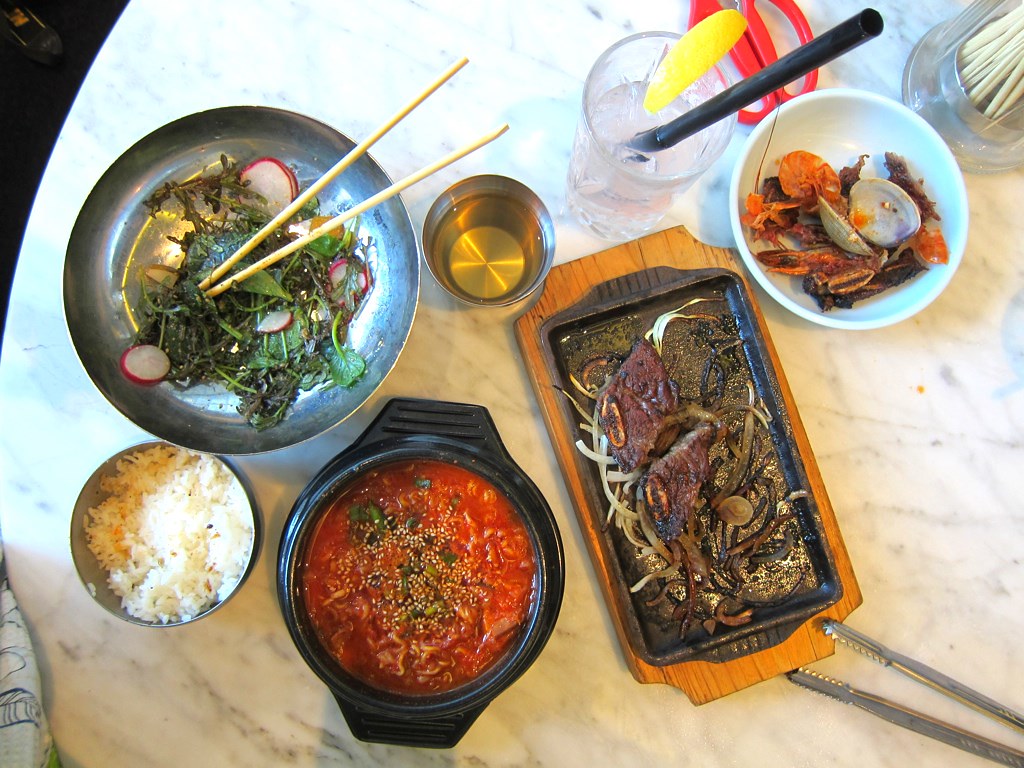 Combo-ing it up[/caption] Ever since POT opened in its first aughts, I admired Roy Choi’s mission of bringing Korean food to the people - all people. Jude Parra-Sickels, POT’s Executive Chef, is at the helm of the kitchen, here, and brings Roy’s vision to fruition. With natural light filtering into the plush, grey lobby populated with pods of round tabled booths, lunchtime brings Korean comfort food even more into the open. The $4 combo deal, whereby you get a tasty Kush Salad plus BBQ veggies, Kalbi, spicy pork or a Craoker along with your pot selection, makes it easy to simulate the banchan that might normally come with your Korean meal. [caption id=“” align=“alignleft” width=“1024”] 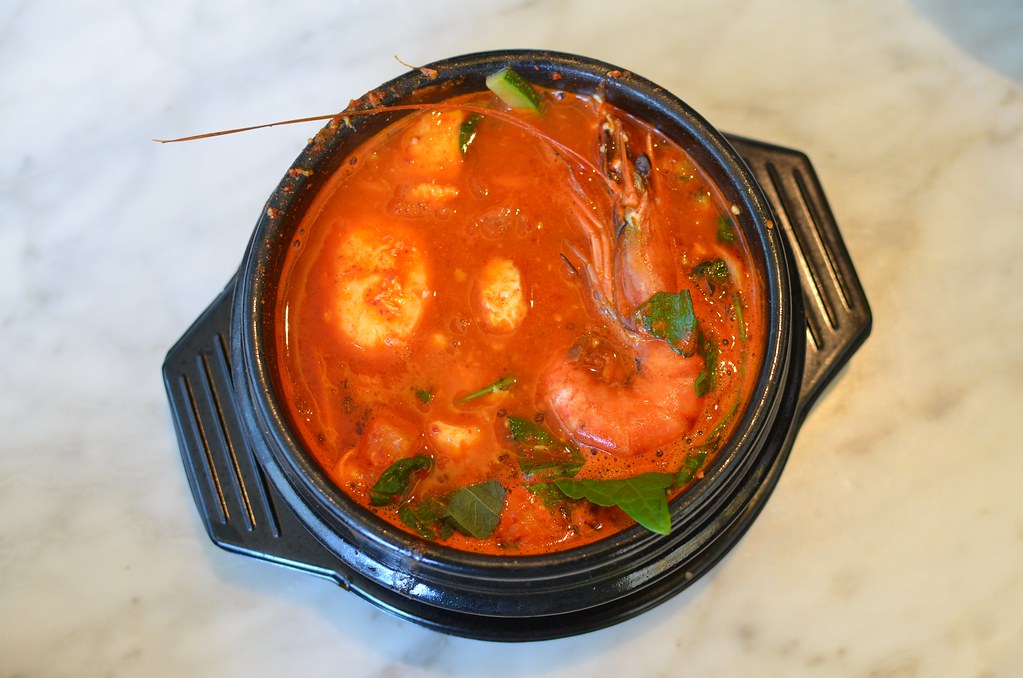 Jamaal Wilkes Pot[/caption] But should you with to supplement your meal with the “Little Things” on the menu, you can do just that with kimchi, spicy dried squid, potato pancakes and some pretty tasty fried dumplings - all ranging from $2 up to $11. There’s also the “Stash,” which is an intriguing stoner snack salad that you’ll just have to try for yourself. Enjoy with cocktails or beer, as this bowl is better than any beer nuts you’ve had. [caption id=“” align=“alignright” width=“1024”] 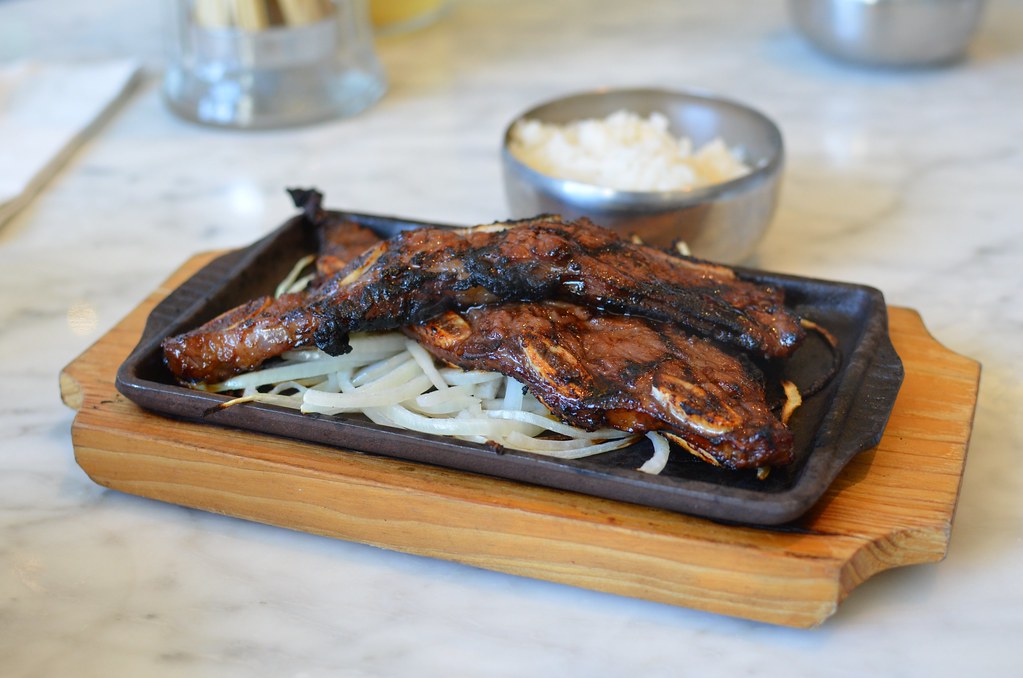 Combo Kalbi[/caption] As for the “Pots,” choose from individually sized versions of a selection slightly different from those available at dinner. Seafood lovers will go with the Jamaal Wilkes (our waiter revealed that the UCLA great actually came in and ordered his namesake pot), Mandu cravings will be pleased by the Dumpling Hot Pot, vegetarians will go with the Cabbage Pot, and hipsters will love the canned meats (e.g. Spam), tofu and instant ramen in the Boot Knocker pot. The classics, the Jiggae What Jiggae Who pot with its kimchi, rice cakes and pork belly, and the Old School with noodles, Bulgogi and kimchi, are also available. [caption id=“” align=“alignleft” width=“1024”] 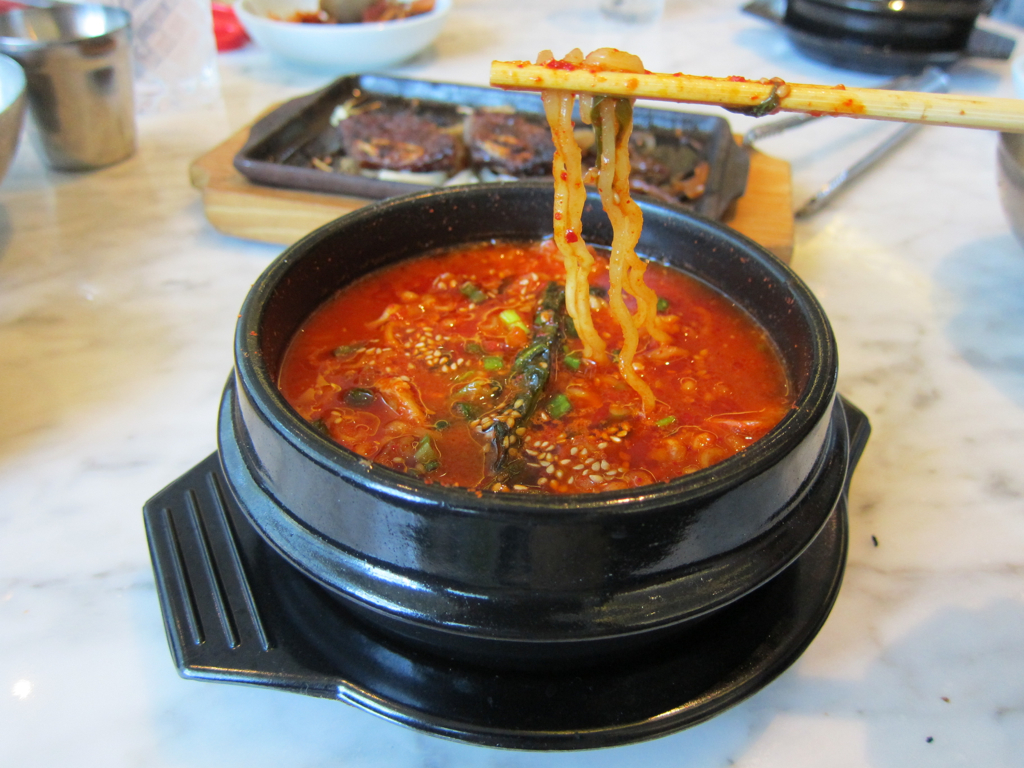 Kimchi Ramen[/caption] New additions to the lunch menu that are not available at dinner include a Chicken Katsu Bowl, Pork Belly Sandwich, and, of course, a Spam Banh Mi Sandwich. I’ve yet to actually try those, so forgive me for forever being enticed by the endless boiling bowls of delicious, red broth with a just-dropped egg and endless goodies inside that I’ve come to love Pot for. [caption width=“1024” align=“alignright”] 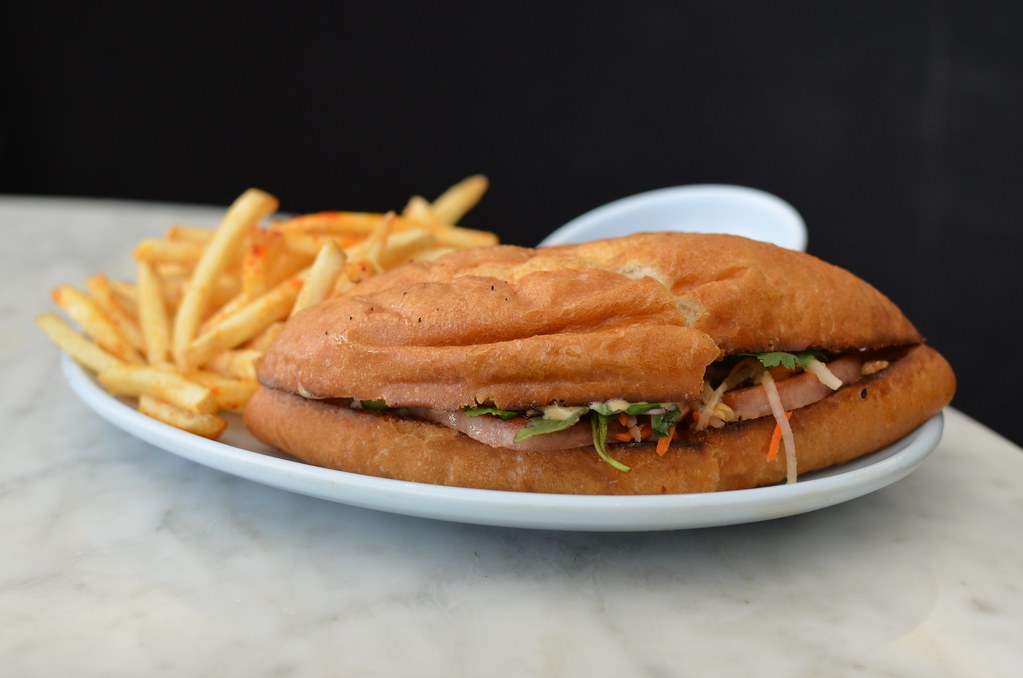 Spam Banh Mi[/caption] Other to-trys that I’m looking forward to are the rice dishes, which include a Stoned Bibimbap for that crunchy goodness, which starts at $10 and only $3 to add your choice of meat. Also, the Ohm Rice, which is ketchup fried rice goodness with kimchi and omelette. But one thing’s for sure. There are a ton of things on this menu can only get better as leftovers, to be picked over and finished as a late-night snack. And that’s why at Pot, there’s really no such thing as over ordering. I look forward to making the trek to Koreatown from my office for many a lunchtime at Pot. All food and drink were hosted.