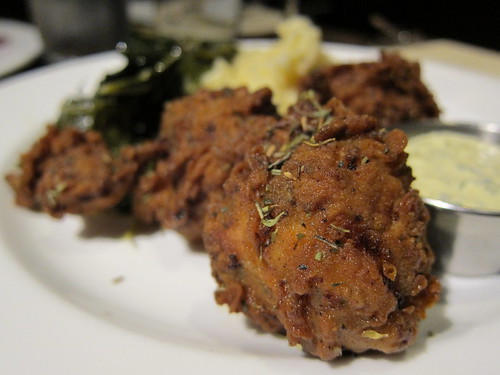 [/caption] Oh, balls. I say such with adulation, not lamentation - since I was lucky enough to squeeze into Sam and Zach’s reservation for a special Monday night. Ludo Lefebvre’s latest one-off collaboration took place at Akasha Restaurant in Culver City earlier this week - and the foodies were out in full force. This time,Â itÂ wasn’t so much a showdown as it was an opportunity for LudoBites fanatics to get a taste of his famed chicken -Â juicy, fried goodnessÂ to which reservations were fully booked 12 hours (or less)Â after the reservation line went live. [caption id=“” align=“alignright” width=“240” caption=“Akasha Onion Rings (Garlic Aioli, Ketchup)”] 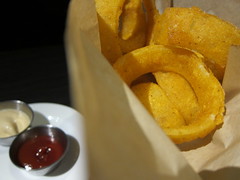 [/caption] Akasha has not one but two deep fryers -Â andÂ Ludo’s chicken certainly benefitted from the tools. We wereÂ each provisioned three rosemary chicken balls, this time furnished with a lemon aioli (as opposed to the sweet chili sauce provided at The Foundry). Rounding out each order were two side dishes - coleslaw, collard greens, sweet potato friesÂ or smashed potatoes. There wasÂ a more lucrative $18 price point to match the chicken’s popularity (at The Foundry, theÂ two pieces of chicken were just $6 - without sides). The sidesÂ at Akasha were delicious, but of course we couldn’t forget Akasha’s own specialty, their perfectly-breaded-and-fried onion rings. Not too greasy or bready, the rings - with their side of ketchup and garlic aioli - actually had me wishing more came per side order. [caption id=“” align=“alignleft” width=“240” caption=“Sour Orange Pie (Key Lime Style) With Whipped Cream & Preserved Kumquat”] 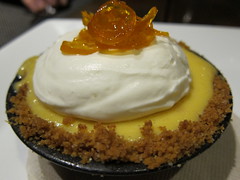 [/caption] Focus now! The chicken! As per usual, the chicken was perfect - a tad darker in mere color than I remember - but I was glad that there was an extra helping of breadding on my plate. It was seasoned with rosemary which was contrasted well by the citrus tang of lemon aioli; the juicy texture enabled each round nugget to fall at my fork. Before I was finished, I heard on my left, “If you leave that on your plate, you’ll never hear the end of it.” Yes, it was recent NYC ex-pat Zach of Midtown Lunch, the fan of all things greasy and succulent. He spoke too soon, as I savored each bite - including the extra skin - and washed it down with Syrah. Each intonation from the jazz trio that played nearby was lost on me as I concentrated on my palate. Thankfully, the movement the music provided to the already-cool, bustling and somewhat industrial-yet-well-lit (great for usÂ food photographers)Â atmosphere of Akasha was not. We finished off with dessert. It was perfectly tangy and sweet - I would come back to Akasha for this pie alone. The crust was perfectly buttery - and Ludo and I joked that we could replace the crumbs on top of the pie with chicken breadding! And as always, the Ludo event had food bloggers and others in the scene crawling out of the woodwork - with out-of-town visitors andÂ @thejgold himselfÂ to boot. Foursquare check-ins (“with 19 other people”) were at an all-time high. Krissy and Ludo made their warm, welcoming rounds. It’s always a party - and I’m lucky to be a wallflower. Did I mention Ludo ran the LA Marathon the day before?! How is that for star power? If you don’t have your LudoBites 4.0 reservation, be sure to stay tuned for the wait list queue - which begins March 28. Further reading: Ludo Lefebvre Reveals International Location, Gram & Papa’s Menu and More - Eater LA