Santa For A Day

Caroline sent out a last-minute email to friends to accompany her on a sleigh pass to SantaCon. I have to admit, it was one of those once-in-a-lifetime experiences I just had to see for myself. If you’ve only read on blogs or heard on Japanese gameshows about mob pranks before then maybe you’re crazy enough to ever have wanted to be a part of the crowd. Just to see. 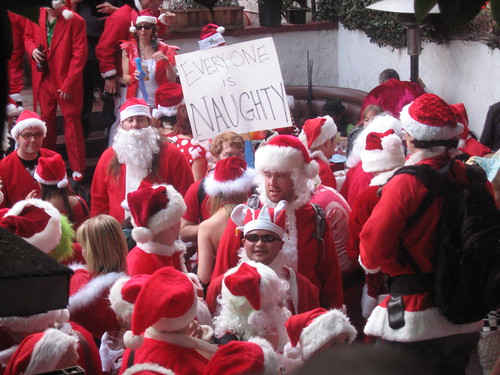 We started out on the East Side and the East Side we’d stay. If you’re going to fill 5 yellow school buses full of Santas chanting “Ho. … Ho. .. Ho. Ho ho ho ho hooo!” then streets better be wide enough to handle the obstruction. And that’s not even including the few dozen Midnight Ridazz Santas on their trikes beating us to each location. El Cid and 4100 bar near Sunset Junction were good first stops (or maybe that was the liquor store) with bartenders prepped and ready to tend to our afternoon habit.

We were even prepped with a song book of rewritten Christmas carols. All day, Santas spoke of Santas in the third, improper person.Â ”Anyone seen Santa?” “He’s around here, somewhere.” Goodwill, cheer and merriment to all - including the “cheer” spread from our buses to pedestrians on the sidewalks. The scene was a spectacle. A day-long hootenanny. A study in … 21st century debauchery. We kept up on the digs through subscribed text messaging and were encouraged to hash tag our tweets (#lasantacon”)) for a searchable archive. Probably 1 out of 0.75 santas had his iPhone or Blackberry out at all times. Updating. Taking pictures and sending them via MMS. And then the cameras…

I didn’t last all day. Okay, okay - I didn’t even last til late afternoon. My excuse was my company holiday party, but I was secretly glad to have it as an out. I missed out on uWink bar (:\) and Power House at Hollywood & Highland, Boardner’s and Jumbo’s Clown Room - with even an “after-party” at The Echo. Apparently, I also missed out on a concocted “snowball” fight outside the first location.

But I was honored to have been part of this mob, if even for only a little bit. Other than the lagging at the beginning for a straggling fifth sleigh, the experience didn’t disappoint. This is a recommended pub crawl that you should do - at least once. Check the nearest, upcoming Santacrawls here.