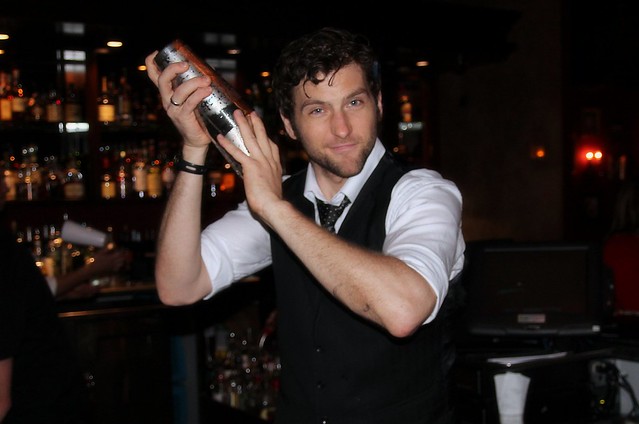 Joe Brooke’s Shaker Face. Photo by Caroline on Crack[/caption] When I first met Joe Brooke at The Edison, it was a whole seven, maybe even eight, years ago. And though I steer more towards food than cocktails on this blog, I hadn’t so much as written about a Vodka-Red Bull by then. My perception of cocktails, as well as as the entire cocktail scene in Los Angeles, was about to get turned upside down. Joe was one of the first craft bartenders I ever met and is one of the most hospitable. He’s one of my favorite people to see behind the bar not only because of his fantastic cocktails and good looks, but because of the way he delivers each and every drink with his good natured expertise. And when he’s called upon to bring it, he’s quite the competitor, too. Since I met him at The Edison, he won Season 2 of NBC/LXTV’s show “On the Rocks: The Search For America’s Top Bartender” back in 2009. On the home front, he has had stints at bars such as Copa d’Oro, Next Door Lounge, The Formosa, and Three Clubs over the past several years. But it was at Mixology 101 where he collaborated with none other than Salvatore Cabrese of Duke Hotel, The Playboy Club, and remains one of the world’s best known and celebrated bartenders. Together, they created over 65 original cocktails while representing the venue on many forums and mediums. And for two years in a row, Joe has also been head bartender of Governor’s Ball at The Oscars, slanging drinks for VIP clientele on the most important night in Hollywood of the year. And now, Joe Brooke is getting out from behind the bar and putting on his spirits rep hat, and at none other than for The 86 Company. You know The 86 Company, founded by Dushan Zaric and Simon Ford, for their excellent, world-class spirits such as Ford’s Gin, Cana Brava Rum, Aylesbury Duck Vodka and Tequila Cabeza. Ford’s Gin is one of my favorite gins, and their bottles are some of the most beautiful in the industry. It’s only fitting that a veteran like Joe Brooke be asked to join their team. He joins a host of other reps hailing from elsewhere, including Tim Cooper (NYC), Kevin Dowell (San Francisco), Martim Smith-Mattsson (NYC), Omar YeeFoon (Texas), and Dan Warner (UK). I emailed with Joe and asked him about his new gig: 1) What makes you so excited about joining The 86 Co? What about the spirits and people of The 86 Co - and your experiences with them - has inspired you thus far?

I’m lucky in that I was in love with each of the spirits before the job offer was even near the table. I also owe a lot to Dushan [Zaric] & Simon [Ford], in that both of them were instrumental in my journey through bartender-land. I love how their approach is “lean & mean”, in that we might be a small company, but are capable of making big-company moves and getting big-company results!. I’m excited to be part of something that has the potential to be the next big thing.

2) Which mentors have been most influential to your career and why?

I will always be grateful to Marcos Tello for bringing me into the fold, and training me up at The Edison. Vincenzo Marianella taught me the nuts & bolts of fresh cocktails and the importance of being able to improvise at the drop of a hat. Salvatore Calabrese at MX101 showed me the importance of the finer points; his level of service was unlike anything else I’ve ever seen to this day. I should also mention that my very first gig in L.A. was at Bar Marmont (8-9 years ago), and it was right after they had their bar program redone by some fancy NY-based consultancy. I was able to steal one of the leftover books from that training, and it became my first road map. Who wrote it? Some dude named Dushan Zaric. Talk about full circle…

If you haven’t tried any of The 86 Co. spirits, get thee to Bar Keeper in Silver Lake or any other reputable retailer and get your bottles, stat.