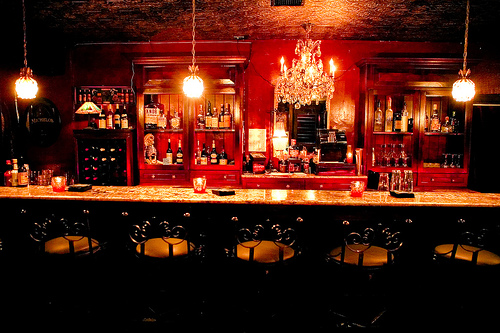 [/caption] We all love Los Angeles for the diversity it affords in all cross-sections of life. (Or, at least I hope you do.) But let’s be honest. When it comes to food, fashion and yes, even drinking, sometimes we’ve come to expect a certain type of scene based upon the neighborhood that we’re in. You’ll find flip-flops accepted and even expected near the beach while they’ll likely be shunned as you head eastbound. Moustaches and more indie music? East. Button-downs over straight-cut slacks? West. Dress code? All over (unfortunately). But recently I found myself in a few bars where the interior and auras had me confused - as if I really were in a different neighborhood. Here’s the rundown on my impressions - along with my favorite cocktail at each bar: Del Monte Speakeasy: Located in Venice, but feels like you’re in Silver Lake [caption id=“” align=“alignright” width=“240” caption=“The PSA”] 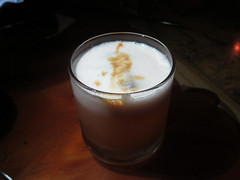 [/caption] Recently outfitted with Brandon Ristaino’s elaborate cocktail menu, Del Monte has upped their game with some pretty fancy - and complicated - recipes. With a new focus on housemade ingredients, the speakeasy menu has some wacky combinations in their drinks. It’s brave and takes risks, which I admire, but unfortunately I didn’t like the majority of the cocktails. While reading the ingredients of a drink off the menu would usually provide enlightenment in my enjoyment of the cocktail, the explanation of each drink was simply confusing as many of the components seemed to clash. The speakeasy area downstairs, however, has a ton of charm - and has only very recently legally reopened. There’s a filled-in tunnel from the Prohibition days in their stock room and the stairs are so old that you best be looking down as you descend - lest you trip down the rabbit hole into this bar that doubles as a music venue! Recommended cocktail: The PSA, made with Pisco, Aperol, citrus, house prepared demerara syrup, egg white & Peruvian bitters (Caroline on Crack explains why). Naya Sunset: Located in Silver Lake, but feels like you’re in Hollywood [caption id=“” align=“alignleft” width=“240” caption=“Naya Sunset Interior”] 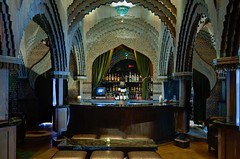 [/caption] Granted, I was at the media opening, but I’m thinking from the dim lighting, loungey seatingÂ and 4-on-the-floor house music, Naya Sunset’s intent was to bring the club to Sunset Junction. With a side of Indian food and a little Southeast Asian flavor mixed in, that is. Thing is, Joel Black’s cocktails are better than most others’ available in the vicinity, so if you’re craving one of the aforementioned - or both - it’d be a mistake to pass Naya up should you happen to be in the neighborhood. My favorite cocktail: The Rocky Patel is a down-and-dirty mix of Chivas 12 Year blended Scotch whisky, Laphroaig 10 Year Islay Scotch whisky and espresso bean infused Zaya 12 Year old rum with espresso bean garnish. The smokey flavor of the Laphroaig blended beautifully with the subtle coffee flavors of the rum. Delicious. Also don’t forget to try the others on for size, such as the Spa in Goa - a refreshing cocktail utilizing Aviation Gin, fresh lime juice, Persian cucumbers, fresh thyme and agave nectar. It tastes just like it sounds, except even better (gin always has a benefit over vodka, no?). R Bar: Located in Koreatown, but feels like you’re in Eagle Rock Don’t look for signage, because it doesn’t exist. And…you need a password to get through the door. Yes, it initially feels a little off-putting, like a douchey dance club, but the passwordÂ can be found out either on their Facebook or Twitter. And once you’re in, you’re pretty much in dive bar paradise. Heavy-hitting jukebox, check. Stiff pours, check. Old, wooden booths andÂ furnishings with sweet nothings and loud somethingsÂ etched into said wood, check. Other than the name, it’s not a pirate bar by the strictest standards, but sometimes I just want a no-nonsense bar with a campy, divey feel. Play Action Trivia on Tuesdays, or if you really were jonesin’ for that part of K-town, you can also karaoke on Mondays (albeit on-stage, rowdy styleÂ and without the private rooms). As far as drinks, stick to the 1:2 pours or just go with whiskey neat. I’d be wrong to recommend it, but they do offer a “mystery shot” to bravely haplessÂ drinkers.

I love unpredictibility. And I’ve always had a soft spot for outcasts. These little gems spread across the cityÂ offer scenes that are totally unexpected given the neighborhoods they occupy. Stop by one and prepare to be at least a little bit surprised.