Lobster Paella and Other Spanish Wonders at Bar Pintxo 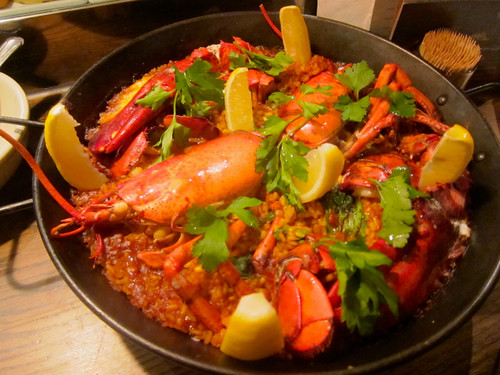 Lobster Paella[/caption] As the Los Angeles “chill” continues, it’s only natural to crave the comforting foods in which we take refuge. Luckily, there’s Bar Pinxto, a tapas place that has reinvigorated the Spanish traditions behind the term that was once disgracefully applied to all “small plates.” The place has the most mom and pop feel of anywhere in the tourist hub of Santa Monica, and the reasonable price points, accommodating happy hour specials and prix fixe menu options clinch its status as a neighborhood favorite. [caption id=“” align=“alignright” width=“240”] 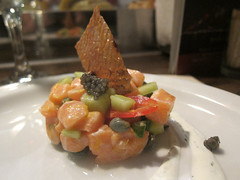 Salmon tartar, dill creme fraiche, wild paddlefish caviar[/caption] That the food is incredibly good may seem like an afterthought in a place like Santa Monica is the real tragedy, but that would be to underestimate its regulars, of which it has many. And you’ll forgive the bar at the front for being communal seating because of its inviting feel. Here, it only adds to home cooked feel of the place - but one of the many tables in the main part of the restaurant will also suffice should you want some privacy. I prefer to eat my meal in view of a whole leg of jamón ibérico, however, and so the bar, it was. At an average of $29-35 for a 3-course prix fix meal, you might expect a deal, but to get the quality of food that my friend and I were served, it’s one of the best bangs for your Santa Monica buck. There was also no skimping on ingredients, as we started out with a deliciously salty Salmon Crudo, composed of tartar, dill creme fraiche and topped with paddlefish caviar. It went beautifully with Emanuel Tres’ 2011 Blanco from Santa Barbara, the minerality of which was a great balance to the fish. (Wine pairings cost an additional $15.) [caption id=“” align=“alignleft” width=“240”] 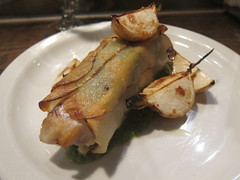 Corvina Sea Bass rolled in potato with sage, orange-glazed turnips[/caption] The other-than-paella main event, a Corvina Sea Bass wrapped in extra-thinly sliced potatoes with sage and a side of orange-glazed turnips was such a masterpiece in flavor combinations while the fish itself was so perfectly cooked. Flaky to the fork yet its mildness enhanced with sage, it was one of the best fish dishes I’d had in recent memory. The orange glaze on the turnips were such a nice way to impart citrus indirectly, while the texture of the roasted turnips along with the thinly sliced potatoes in which the fish was rolled gave the overall dish some weight. It was beautiful, and it makes me wonder if the dish makes repeat appearances at the wine bar. I hope it does. But I’d be lying if the main attraction weren’t the Lobster Paella. The fact is, it was heavenly - with incredible flavor in the rice, which was just that perfect consistency of gummy, far short of mushy. You could taste the freshness of the lobster that lay across the paella pan. Unfortunately, I can’t surmise as to when the next time lobster paella will be available, but the good news is that they do serve a different paella every day except Thursday, with Tuesday being on the patio ($9 per plate) after 6 PM. So the moral of the story is, know before you go. [caption id=“” align=“alignright” width=“240”] 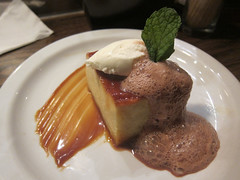 Bread Pudding Cake with salted caramel and chocolate emulsion[/caption] They even did their bread pudding right, which made for the best sweet-salty nightcap. It came in the form of a just-dense-enough bread pudding cake topped with vanilla ice cream and chocolate emulsion. And for the chef’s tasting menu, you’d best be visting Bar Pintxo for a similar, refined experience early on a Thursday through Saturday, as those days are when the tasting menus are available. (It’s only $29 on Thursday nights, apparently.) They do also offer a 6 dishes for $6 happy hour, which is a great way to dip your toe in the water. Based on my experience, it’s worth it to just go all in, though, and commit to the meal. Wash your meal down with some excellent California and/or Spanish wines. Dabble a little with their full liquor capacity, which they’ve been experimenting with lately in the form of a Gin & Tonic bar. Think infused gins with cilantro, ginger, olives and the like. While I’d be hesitant to harp on the often controversial factor of authenticity in a restaurant, it looks and tastes as if Chef David Plonowski is really creating a true, Spanish experience in the open kitchen of Bar Pintxo for his diners. All food and wine were hosted.

10% discount on check with nearby movie stub