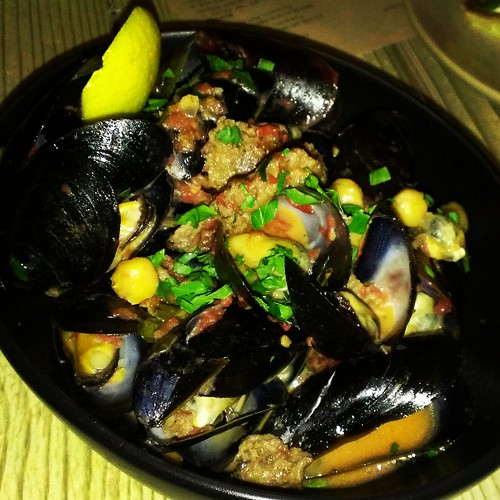 Portuguese Mussels, linguiça, beer, chickpeas[/caption] While I love living in Hollywood, sometimes you have to acknowledge the strengths and weaknesses of living in a town that’s the notorious destination for clubs, live acts, theatre and just plain drinking. And as a resident, I’m so glad that David Reiss’ (A-Frame, Sunny Spot) new place featuring the wares of Jason Travi (Spago, Fraiche, La Terza) is here. Littlefork is a clear selection that sits under the “positives of Hollywood” column. (If you’ve ever eaten at the former Korean BBQ spot, which happens to lie spitting distance from arguably the best concentration of Korean food in the world, I’ll try not to judge you.) [caption id=“” align=“alignright” width=“240”] 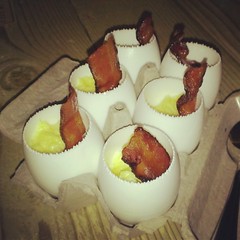 Maple Eggs[/caption] After having visited twice during the Northeast seafood-inspired restaurant’s infancy (it’s been open 2 weeks now), I’ve a good idea of what I’ll be ordering on subsequent returns while other plates get their polish. At the top of the list is their oysters on the halfshell. While you should know about the crazy-awesome oyster happy hours around town*, these are the best priced oysters I’ve seen on a regular menu: $13 for six or $25 for twelve. Not only that: I got to try two Massachusetts varieties (Rocky Nook, Barnstable) that I hadn’t heard of, before. They both had a clean salinity to their taste, with not so much brine, and were rather pleasing in size. (Sometimes those Kumamotos are just so darn small!) You win, East Coast oysters. If you’re looking for a little bite of breakfast to start off your meal, you’ll love Littlefork’s Maple Eggs, which combine the textures and tastes of that forsaken meal into a little plastic version. The Portuguese Mussels, furnished with house-made linguiça, were flavorful - in no small part thanks to the broth at the bottom with which we sopped up with buttery, grilled toast. [caption id=“” align=“alignleft” width=“240”] 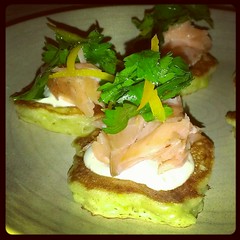 Salmon Leek Fritters[/caption] The Clams Casino is solid as well, but if you’re one to argue with clams, bread crumbs and/or bacon, I doubt there are many things we have in common, as it is. This brings us to the Clam Chowder, which, if it were a bad rendition that existed here, would singlehandedly undermine this restaurant’s existence. Thankfully, it IS really good with a consistency that’s just chunky enough and favor that doesn’t breach too creamy or buttery. Hallelujah. Like the Clams Casino, it also has bacon, playing its trump card role as it always does. Perhaps the most puzzling thing may have been the Steamed Snow Crab, which really did taste good but the shells of which betrayed the fact that it had been frozen. At the same time, I have a hard time complaining about this since it’s only $18 for basically an entire crab, save for the innards. I’ve always been a leg kind of girl, anyway. There’s an “Applewood smoked” section of the menu, which has gone unexplored except for the tasty, smoky Salmon Leek Fritters. [caption id=“” align=“alignright” width=“240”] 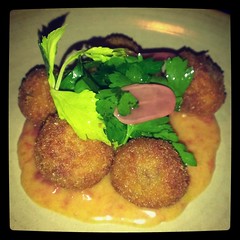 Crispy Headcheese[/caption] As far as non-seafood, I loved the consistency of the Steak Tartare, which interestingly enough is coated in bacon hollandaise, though it was light on seasoning. And if you’re a charcuterie lover, it won’t necessarily mean that you’ll like the Crispy Headcheese, which is essentially fried headjelly balls - but you will love the smoked brisket, the presentation of which appropriately matches that of charcuterie. It comes with whole grain, dijon and raisin-infused mustard and are tasty accompaniments. While the Smoked Meats Poutine was initially an exciting menu item on first glance, I thought our serving could have gone heavier on the actual meat, cheese curds and even gravy. The Duck Breast with braised greens and maple cider sauce, however, was cooked perfectly with right amount of pinked flavor in the center of the cut. Unfortunately, I have no input on any of the vegetable dishes - but given the kind of fare they serve, can you really blame me? Perhaps I’ll update this later, as well as with a report on the other committal “large plates” that buttress the bottom of the menu, including a Sea Bass Baked in Salt Crust, an Italian tradition I have a hard time passing up. [caption id=“” align=“alignleft” width=“240”] 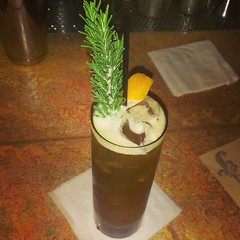 Kentucky Daisy[/caption] And I must stress here that I could easily write an entire other post about the cocktails, alone, so don’t be fooled by their being mentioned in the second half of this post. The collective is nothing short of the most serious cocktail menu I’ve drunk in Hollywood in recent memory. And by “serious,” I mean “right up my alley.” And by “right up my alley,” I mean dry, bitter yet nuanced cocktails. Dino Balocchi, who is one of the barmen who helped open Chicago’s famed Longman & Eagle and now a Hollywood transplant, included not even a token vodka cocktail. The rye and bourbon cocktails pretty much hit it out of the park, while the gin cocktail I favored far above the others was the Logan Square. The gin, Carpano, Benedictine, Angostura, chocolate and mint. I loved the spiced pomegranate component in the Bald Jack, the inclusion of pinot noir for an extra smooth, bourbon-based 19th Century Sour and, of course, I don’t have to tout the Kentucky Daisy so much as I should mention that it has cynar in it. We may have just Hollywood’s brown cocktail wonderland, here, folks. The only question, now, is the consistency. [caption id=“” align=“alignright” width=“240”] 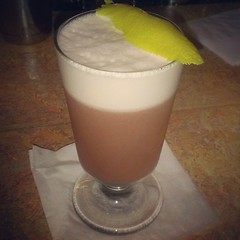 19th Century Sour[/caption] The best selling El Perdido, with tequila, lime, green chartreuse, Cocchi Americano and strawberry chile bitters, may be inconsistent as the barmen get their training wheels on, but its refined incarnation really is fantastic and I hope becomes perfected and turns out more often than its Hollywood-ified, sweetened version. It can serve as a metaphor of shorts for my worry about the push and pull of the neighborhood’s preferences for the sweet drinks. The Georgetown Swizzle is also a must-order for rum lovers and stiff drinkers, with the inclusion of dark, Jamaican rum but also EXR liqueur.  if And if you’re craving something extra special and extra dry, may I suggest the off-menu Chicagoan, which Dino brought to Longman & Eagle’s menu. This is for dry-drinking adventurers, since the cocktail is made with Malort, rye, cynar, kosher salt and punt e mes. To give you an idea, H.C. of LA-OC-Foodie and I were the only ones at the table who liked this cocktail (or even Malort, period), with my rationalization that I actually love the taste of “old, dying man.” As for small dessert menu,all you need to know is to get the Apple Cider Donuts. I am really excited for this place, which is at least part auspicious wishing on behalf of my neighborhood. But there were a lot of pleasantly unexpected things I encountered on both of my trips, and with some more honing and tinkering, I have big hopes for Littlefork. As for Hollywood, it’s potentially good drinks and eats without having to sacrifice one for the other. * Caulfield’s in the Thompson Beverly Hills (full review forthcoming) just started a $1/oyster Friday happy hour from 5 - 8 PM, today! Also, Hungry Cat Santa Monica has half-priced oysters on Mondays, all day.