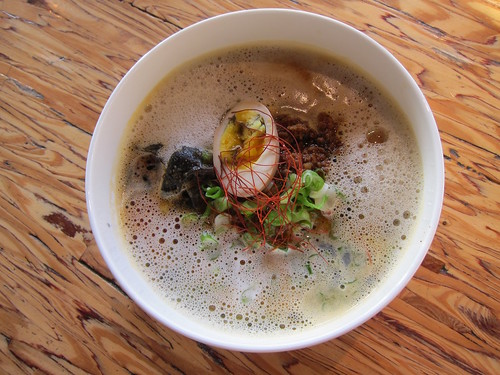 [/caption] Breadbar, with its regular offerings being that of breakfast through lunch, is the site of many a nighttime pop-up. The latest one is curated by a regular of the space, Chef Noriyuki Sugie of Ironnori Concepts. It’s a casual stint to last through September,Â but as my recent dining experience has shown, Chef Sugie can sure serve up a solid bowl of ramen. [caption id=“” align=“alignright” width=“240” caption=“Corned Beef Side”] 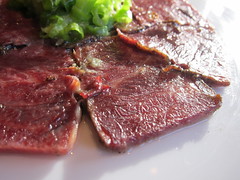 [/caption] I accompanied Fiona; together, we were able to try the Oxtail and Spicy varieties. Though the gastronomic foam layer on top of the broth intially threw me off (how good can fancy-looking ramen taste?), when I took a slurp I was pleasantly surprised by both the flavor of my Spicy broth as well as the freshness and bite of the noodles. Fiona’s Oxtail bowl of ramen differed more than just in toppings; her noodles were even a bit different (round and maybe a tiny bit coarser, whereas mineÂ had four sides and were more tender) and the brothÂ had a decidedly deeper, richer taste. My broth was a bitÂ more “mapo,” with tinges of bean curd in the broth. Both were delicious, but I loved mine for the familiarity. [caption id=“” align=“alignleft” width=“240” caption=“Beef Tongue Side”] 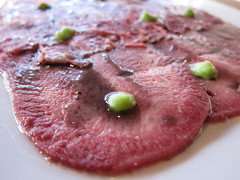 [/caption] You can also get the types and toppingsÂ of ramen as sides on a plate. The corned beef “is what it is,” so if you’re a bit more adventurous I’d recommend the tongue. The hibiscus and pineappleÂ sodas, a substantial add-on at $4,Â are housemade and delicious but also a refreshing off-set to the salty ramen. So stop on by Breadbar on 3rd Street (not to be confused with the other locations) one of these summer nights. Personally, it’s a closer alternative than the trek to my trusty Santouka, and since it’s temporary, it also carries a bit of welcome novelty. (Vegetarian? They’ve got you covered, too, with the appropriate modifications and omissions. And apologies for that tongue photo in this post.) All food and drink were hosted.