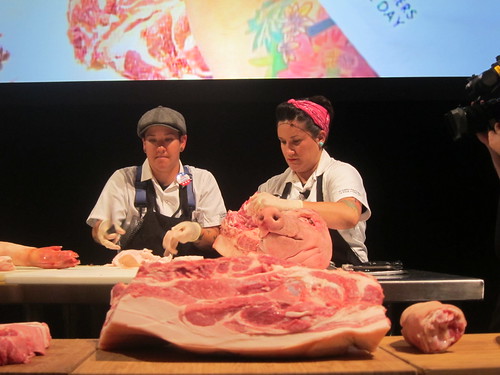 [/caption] Every food enthusiast knows (here in Los Angeles, anyway): Culinary events come and go, each offering its own celebration of chefs, food and wine. But nothing was about to prepare me for the best of that pig fest, Cochon 555. So named because each city it visits brings together five local chefs, five heritage pigs and five winemakers, Cochon 555 held an “all-star” edition with favorites (that is, 10 chefs, 14 pigs and 4 butchers) hailing from cities all over to Vegas, baby, Vegas. [caption id=“” align=“alignright” width=“240” caption=“Charcuterie from Fruition - Denver, CO”] 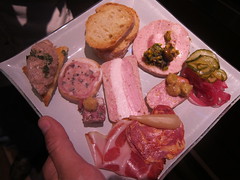 [/caption] Representing Los Angeles? No chefs, alas (are we snubbed, much?). But a social media-savvy pair of talented butchers with a shop on Fairfax called Lindy & Grundy were there to perform a live butcher demonstration - with projector screen and microphone on the ready - alongside Michael Sullivan of Blackberry Farms. Favorite bites included an impressive array of charcuterie from Fruition in Denver. With this being my first booth visit, it was good indication that I’d have a very hard time avoiding literally rolling out of the posh, velvety Cosmopolitan convention room by the end of the event. [caption id=“” align=“alignleft” width=“240” caption=“Swiss Army Pig from The French Laundry - Napa, CA”] 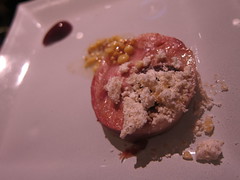 [/caption] Another standout was the Swiss Army Pig as presented by Napa’s The French Laundry - with every part of the pig included with the bite prepared with sour morello cherry, red walnuts, Dijon and thyme with a dusting of chicharron. Delicious. Probably the most impressive presentation at Cochon All-Stars was the Prosciutto cotto tremazzini from New York City’s Del Posto, by which you wrapped a sandwich with a massive sheet of charcuterie. There were a ton of textures delivering unmatched decadence only cut by the two tiny pieces of bread. [caption id=“” align=“alignright” width=“240” caption=“Tarte Tartin, Chicarron Ice Cream Sandwich from Lark - Seattle, WA”] 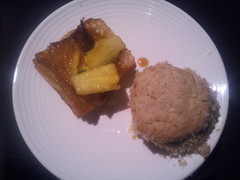 [/caption] My favorite Asian homage at Cochon All-Stars was the Open-faced Banh Mi from Chicago’s Stephanie Izard of Girl and the Goat. All the right Vietnamese flavors were there as was the deliciously crispy pork texture. And if you ever doubted the concept of pork dessert, John Sundstrom (Lark - Seattle, WA) would prove you wrong. His Tarte Tartin with pork belly, pineapple and soy caramel was perfect. Also served at this booth was a decadentÂ pork-flavored ice cream sandwich made with maracon-ish cookies on the outside. These two made up for the fact that I missed the bacon-caramel milkshake that others had been raving about, but which I forgot toÂ check off the seemingly never-ending list of bites. [caption id=“” align=“alignleft” width=“180” caption=“Masubi Cocktail”] 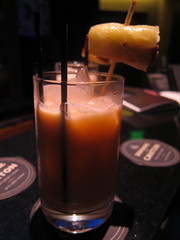 [/caption] In-house (Cosmopolitan) restaurants were also given their due without the requisite of serving up pork. Scarpetta dished out their Short Rib Agnolotti and Blue Ribbon made hand rolls of spicy tuna and uni. Of course, I could always make room for sushi. Cocktails were presented by Domaine de Canton, Maker’s Mark and No. 3 London Dry Gin. My favorite cocktail had to be the Domaine de Canton’s Masubi - much like a ginger pina colada. Of course, the pineapple-wrapped fried pork with rice had to be the most theme-appropriate garnish in the place. I’ve been to many a food fest in my day, but Cochon 555 All-Stars definitely takes the cake as one of the most well run with plenty a bite left over. There were no lines and I didn’t see one booth run out of food. Admittedly, this had more to do with the fact that I had to leave 15 - 20 minutes before the end of the event or face total gastro-destruction. Thank goodness my hotel room was just a 14 floors and a tower away so I could sleep away the lethargy. Just in time for the VIP afterparty. There were more pig bites there, too, but the party was outdoors at Overlook Bar & GrillÂ in 105 degree Las Vegas heat. Ugh. I opted for the mojito and tequila sunrise push-up pops, instead. VIP Ticket to Cochon 555 All-Stars andÂ Cosmopolitan Hotel accommodationsÂ were hosted.