Larry's in Venice: A Space To Savor 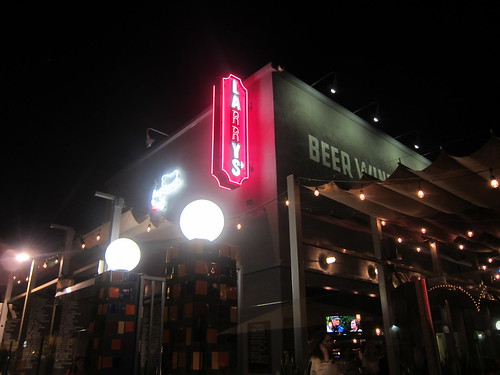 [/caption] There’s something poetic about a restaurant that knows its place. Larry’s, located on the beach and open since mid-August, seems to embody that with its beautiful, convertibleÂ patio and simple menu. [caption id=“” align=“alignright” width=“240” caption=“Potted chicken liver & foie gras parfait”] 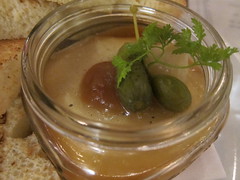 [/caption] Not a single item on the menus (printed on paper and ready for you to tally as in a sushi bar) is over $15, yet hardly any of the dishes lack in heft. Rather, full flavors - and beer, complete with 26 tapsÂ - seem to be the focus at Larry’s. It may be Vegetarian- and Vegan-centric Venice, but omnivores can appreciate the wide selection of charcuterie, flatbread toppings and small plates doubling as entrees; there’s plenty of meat on this menu. Such asÂ the delicious pot of chicken liver & foie gras parfait (nothing like duck liver to even out the pungency of chicken liver). You can also order the charcuterie and cheese - a solid representation - either to start or to nibble on during the length of your stay. Nothing is parsed out as appetizers or mains, and it serves as a plus. No one is going to scold you if you want to share your organic sal, I’m sorry,Â bacon-wrapped organic salmon with your friends. [caption id=“” align=“alignleft” width=“240” caption=“Shrimp & Maine Lobster Ragout”] 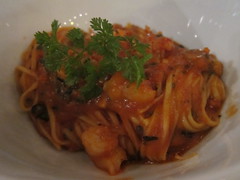 [/caption] Flatbreads: check. The crust is respectable (could it be the water?) and the variety of topping combinations is enough to keep anyone satisfied. The Green Curry Mussels - a staple at any gastropub - were good and maintained its status as a reliable dish. Surprisingly, one of my favorites was found in the capellini pasta, which was a Shrimp & Maine Lobster Ragout with lobster tomato sauce, basil and truffle. While sampling some of the heavier items (yes, even sampling does this) had me worried about passing out on my drive home to Hollywood, it was this pasta that was ironicallyÂ the standout. That is, in addition to sipping Ommegang’s Hennepin Farmhouse Saison and a New Belgium Hoptober. While you won’t go to Larry’s to achieve your latest culinaryÂ epiphany, Chef Brendan Collins (Waterloo & City) does a great job setting upÂ a solid menu forÂ this gastropub-by-the-beach. They also tap new, localÂ and/or rare brews there once in awhile, such as Atwater Village’s brand newÂ Golden Road Brewing Company’s Point the Way IPA. Whereby I normally avoid the beach in most things food-relatedÂ (it’s about the view, isn’t it?), Larry’s, with its wide draft selection, beautiful people and unmatched outdoor-indoorÂ backdrop,Â really can’t be beat. Bring friends. All food and beer were hosted.