I’ve said it before and I’ll say it again: Los Angeles is a terrible thing to waste. Be as it may be the land of movies, you’ve gotta figure there’s something different for the average movie-goer here. Though it certainly is very impressive, that “something different” is not Grauman’s Chinese Theatre. No, it’s our duty to turn our noses up at all tourist traps, and that one theatre of many is no exception. (Psst…but if you haven’t, ever…be sure to go see one movie there. That’s it. Just one. Your excuse as you make your way over there and you run into a friend just outside on Hollywood Boulevard? “I haven’t seen it since the remodel.“Â  It is pretty spectacular inside.) So when my best friend asked us to go see Quentin Taratino’s newest release “Grindhouse”–which happens to be a double-feature–at The Vista Theatre in Silver Lake, I decided to give it a whirl.Â  The Vista is the origin of the tiny Silver Lake Film Festival, which is actually upcoming in May. The Vista (calendarlive) is a spectacular independentÂ theatre.Â  ItÂ always plays a first-run film and it tends to cater to an audience filled with industry people.Â  That is, without charging industry prices.Â  It will cost you $8Â for admission or even $5 for the first showing of the day (consider it The best-kept “finger to Hollywood, next to Hollywood”).Â  As you walk into The Vista Theatre, you may find its Egyptian decor cheesy or charming.Â  While you’re in the single theatre, however, you won’t be disappointed.Â  It has the best sound and you will always find yourself with plenty of legroom.Â Â Apparently, whenÂ they had redone the place they had taken out every other row.Â  As we walked out from sitting a bit too long as would be common for a double-feature, I noticed that Quentin Taratino himself had given our venue his seal of approval: 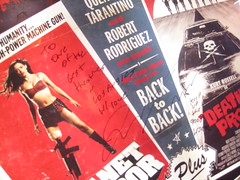 “To one of the best theatres in Los Angeles w/love…keep up the good work.”

I enjoyedÂ ”Grindhouse.“Â Â ”Planet Terror”, aÂ parody of horror movies, had all the essential elements that are worth making fun of.Â  Clever and kitsch, all-in-one.Â  “Death Proof,” instead ofÂ guys with gunsÂ ranting offÂ to each otherÂ in a display of pop culture analysis, insteadÂ showcased chicks with cars in such dialogues.Â  *raises hand*Â  It was up my alley.Â  It was aÂ blackspoiltation example of today.Â  As is classic of Tarantino, it’s about the verbiage more than the action, and whatever action ensued it was indeed action-packed.Â  Not to be taken seriously, these movies are instead most thoroughly enjoyed when you sit back in your chair and let the visuals, references and tongue-in-cheek comedy take you over.Â  I do admit, though, that my butt was asleep by the time both features were finished.

Another theatre also recommended, and personally my most frequented:Â  The Arclight Hollywood.Â  Movies are $11 per admission but $10 for a “member movie.“Â  If you are a member of theÂ Arclight, you collect 10 points per movie with 50 points granting you a free concession or 100 points for a free member movie and 200 forÂ any movie.Â  They always haveÂ the best qualityÂ (and limited release) movieÂ picks of any multiplex you’ll run into.Â  They close seating once the movie has started so you don’t interrupt the people already seated, and do a little personalized schpiel in the beginning to let you know they are “keeping an eye on the picture and sound quality.“Â  All-natural popcorn, too.Â  How shi-shi!!Â  Also, for that closet star-stalker in you, you’ll undoubtedly run into a celeb catching a movie here.