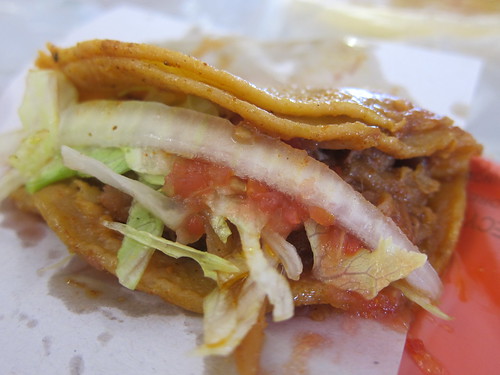 Steamed Beef & Potato Taco[/caption] There in our van, with exterior temperatures having hovered around 90 to 100 degrees for the 5th and final day, were Bill and his wife Ariana, Barbara, Fiona and I being driven by the tireless, hospitable Ruben. We were heading home from San Felipe on our drive through Baja California, concluding with a jaunt through Mexicali - the Chinese food capital of Mexico - and to Tecate. Then, back to Tijuana. [caption id=“” align=“alignright” width=“240”] 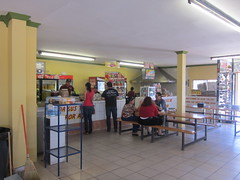 The Counter at Tacos Lalo[/caption] Almost home, but not quite. Time for a taco. In between Mexicali and Tecate lies La Rumorosa (in 2001 NYT article), an area named for the sounds made when winds blow through the canyons. You’ll miss it if you blink, but Tacos Lalo is every reason to keep those eyes wide, even if you find yourself there in the blisteringly hot desert in June. Steamed tacos? I had never heard of Tacos al Vapor. But there they were - surprisingly flavorful and lucious fillings cradled by two damp tortillas. Yes, the damp tortilla thing was new to me, too. But how often have I been non-plussed by a cold, tough (synonymous with store-bought) tortilla? Countless times. Tacos Lalo tortillas just blended in seamlessly with the braised meat. Wet, but also flavorful. There was also just enough potato to fill out my taco without being filler. If you visit, you’ll definitely want to add your share of salsas (I was negligent with my own taco, above) to compliment the über tender meat. I’m all for a ton of raw onions, at the very least. Eat fast, as you do with delicious and greasy hot messes. But wet tacos make a ton of sense in the desert. It’s almost as if you’re simultaneously satisfying your hunger and quenching your thirst with each taco. While you’re there, you might as well stay and play foosball at one of the 3 tables. Could there be Tacos al Vapor in LA that even comes close to this execution?