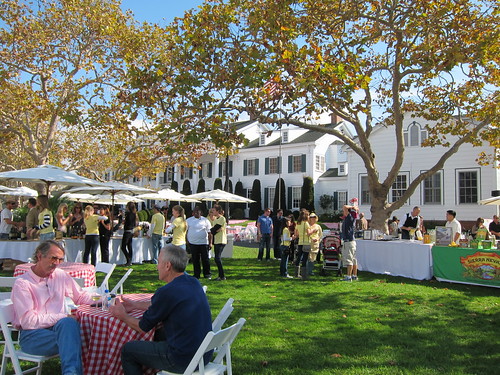 [/caption] There were a lot of events going on over the weekend, but the inaugural LA Loves Alex’s Lemonade at Culver Studios was a culinary extravaganza to hit it out of the park. The backdrop? The famous Gone With the Wind mansion on a beautiful autumn day. Our hosts were Chefs Suzanne Goin and Caroline Styne (Lucques, AOC, Tavern) along with Chef David Lentz (Hungry Cat) - and there was a solid showing of chefs from across the country who all offered their live talents to an event whose goal was to fight childhood cancer. [caption id=“” align=“alignright” width=“240” caption=“Seasonal Antipasto | Chris Bianco”] 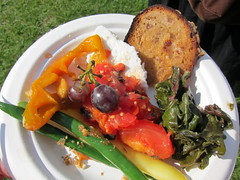 [/caption] The standouts? Chris Bianco’s Antipasto dish, featuring beautifully seasoned fall vegetables and almost making us forget that it was his pizza we were looking forward to. Celebrity chef Giada of The Food Network was personally on-hand to serve up her Pasta Ponza, topped with a fried prosciutto. Paul Kahan, of The Publican in Chicago, brought forth a delicious house-made chorizo coupled with cured ham and dressed with arugula and apples. Hailing from New Orleans was a dish from Susan Spicer’s Bayona - a delicious grilled rosemary shrimp with artichoke bread pudding. Local Neal Fraser (Grace) had pig on the brain, or “Pig in a Box,” as he called it. We caught him reloading charcoal into his smoking apparatus and appreciated the pork he prepared, dressed with a side of mustard potatoes and brussel sprouts. [caption id=“” align=“alignleft” width=“240” caption=“Caramel Chocolate Macarons | Tavern”] 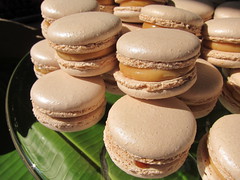 [/caption] With all the dishes at the event making it ever apparent that it was autumn in Los Angeles, the cocktails and beer did not pale in comparison. VIP had access to Craftsman Beer, offering up their Triple Sage, Lavender Sour, Poppy Fields and Firestone brews. Hungry Cat cocktails were also in VIP and out in the common area and were delicious as ever. Of course, we can’t forget the epic dessert table from Tavern and Lucques. S’mores, caramel chocolate macarons, carrot cake - I didn’t even have room for a bite of everything on the table, though I wanted to. Fortunately, I was able to stuff in almost a half-scoop of Mozza’s Meyer Lemon Gelato. ItsÂ lemon zestÂ packed punch in the midst of a goat cheese-like flavor and consistency. If Caroline on Crack, Lindsay of LAist and I didn’t have somewhere else to be later that day, we would have surely enjoyed basking in the Culver City sun with our perfect cocktails, food, beer and desserts the rest of the afternoon. Overall, it was such a stand-out showing that I do hope the event moves from inaugural to annual.