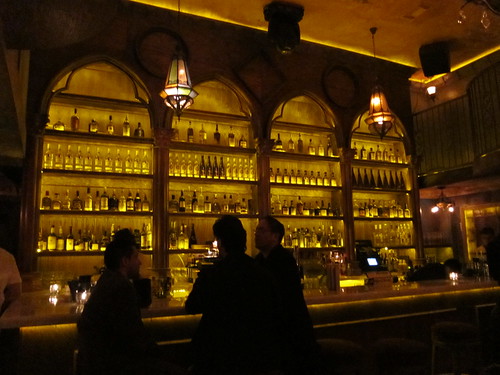 [/caption] The speakeasy isn’t dead. Due to fatigue induced by Mark Gold’s wonderful friedÂ chicken over at Eva,Â I had missed a late reservation on opening night at La Descarga. Luckily, thanks to Mattatouille and the company of H.C. of LA-OC-Foodie and Fiona of Gourmet Pigs, I was able to avoid the rush and visit the new, under-cover, reservation-only rum bar the very next night. Struggling under the weight of a wine-paired meal at The Raymond in Pasadena, I was determined to see what all the fuss was about. Back in a part of Hollywood that actually borders on Koreatown, comes experience from other parts of town like the membership-only Doheny.Â Â With additional cocktail friend in tow, we admired the neighboring taco stand (complete with lucious spit of meat in the window) while beingÂ cleared byÂ the well-dressed, courteous doorman with a clipboard. And up we ascended, up narrow stairs and through jaggedly winding hallways and into an … office with a beautiful lady behind the desk. At La Descarga, she let us know, there are two bars andÂ one smoking room. The bar in the back smoking room is reserved for rum only while the main, front bar will serve us their cocktail menu. Cigars are available (10 hand-rolled and aged varieties, that is,Â for your pleasure). From what I heard about Bill and H.C.’s opening escapades the night before, I had already known this - as H.C. had been lamenting about his dry cleaning bill earlier. The hostess walked around the desk and toward us. Naturally, we backed up. And it was then we noticed that to our right there was a wardrobe, which she opened. We saw white linen Havana shirts hanging withÂ a passageway behind them. 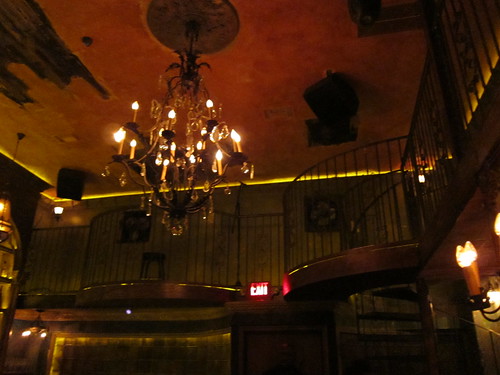 The view at La DescargaÂ upon entry is rather breathtaking to its arriving guests, whoÂ have an elevated look at the bar sceneÂ before descending theÂ spiral,Â iron-wrought stairs to assimilate.Â There is no visually unannouncable arrival at this speakeasy. Latin music permeates the ambiance and for once in my life, the bar I’m at is audially fitting - even pleasing. Bring on the salsa, flamenco, rumbaÂ - just so long as it’s jazzy, if even African. The yellow glow from the bar is echoed from the far reaches of the distressed and high-ceilinged enclave which, coupled with the antiqued furnishings, give guests a rather warm, invitingÂ feel. And oh, that back room, which is to be the setting for many shenanigans to come. I imagine groups of men who come to smoke their cigars in peace -Â not withstanding, in their other hand a lowball glass of, perhaps, El Dorado 21 Year Special Reserve. The feel of it isÂ indoors with enough ventilation to meet outdoor code. Oh, right.Â The cocktails. Thanks to the hospitalityÂ and skill ofÂ Pablo Moix (formerly of STK) himself - I felt right at home while drinking my Tropical Holiday ($12), which was so good, so delicious and appropriately complex. The bitters met me at the finish.Â It’s made with Rhum JM Blanc, Velvet Falernum, lime, sugar, soda and bitters. In fact, it inspired me to order a rum cocktail with dinner … almost 24 hours later. I wanted to be taken “back” to Cuba. But next time, I’ll be sure to try their other cocktails, such as the Hemingway Daquiri,Â made with double rum, lime juice, grapefruit juice, Maraschino liqueur and sugar.Â Or the Bad Spaniard, made with Cruzan Black Strap, Amaro Averna, egg yolk (thank god it’s not New York), sweetened condensed milk, cinnamon and Francisco Franco. The drink menu runs from $10 to $12 while the backÂ rum bar carries 70 varieties of rum - from which you can order a flight, probably the only place in Los Angeles this is an option. Your bill comes in a - you’ve guessed it - wooden cigar box. Classy. AndÂ by all means, let’s not discount their aptitude in other spirits.Â H.C.’s Manhattan was perfect in knocking me off my feet - complete with two brandy cherries at the bottom (mind you, these babies are $100 per gallon and are deeelicious!). Fiona’s Aperol cocktail was strong, not too tart yet had the appropriate kick. It may not be in Havana, but the feel of La Descarga is every bit authentic andÂ inviting. I look forward to an extensive education in rum and perhaps evenÂ other spiritsÂ in my near future. 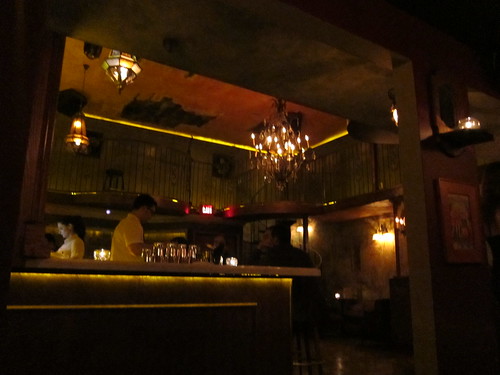