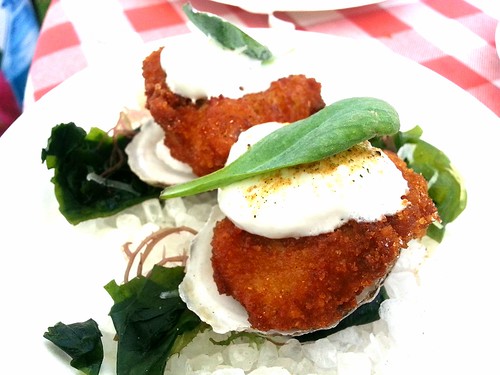 Chicken Oysters by Michael Voltaggio[/caption] L.A. Loves Alex’s Lemonade, for my third year in attendance, remains one of my favorite food events. The original idea of Alex’s Lemonade arose out of a courageous four-year-old’s battle with neuroblastoma and her desire to donate the proceeds of her lemonade stand to doctors who have helped her. Childhood cancer strikes a chord personally, as my first born nephew was diagnosed with Acute lymphocytic leukemia at the age of 1 1⁄2. Thanks to treatment and some faith, he’s now entering his teen years as a survivor. Of course, more research needs to be done. [caption id=“” align=“alignright” width=“240”] 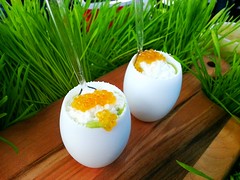 Neal Fraser’s Avocado Soup w/Horseradish, Razor Clams & Smoked Trout Roe[/caption] My family’s personal connection to childhood cancer, though, hardly detracts from the fact that this is a food event at which you’ll see chefs you wouldn’t likely see at others. One reason is that the crème de la crème of L.A. shows up. Another reason is that star chef power is imported from other cities. This year’s event was a sold-out success, and it was so great to see everyone come out in full force with their creations even in the onset of the latest heatwave. Good thing there was lemonade! Names from afar included Donald Link from Cochon and Herbsaint (New Orleans), April Bloomfield from Spotted Pig (New York), Paul Kahan from avec, Blackbird and Publican (Chicago), Johnathan Sundstrom from Lark (Seattle) and Jonathan Waxman (New York). Representing our cross-state neighbors to the north were Michael Tusk of San Francisco’s Quince and Matt Accarrino of SPQR. [caption id=“” align=“alignleft” width=“240”] 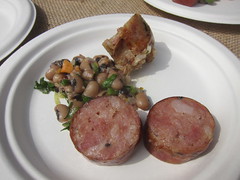 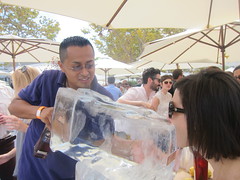 Ice Luge by The Varnish[/caption] But none of this would have been complete without a solid showing from some of L.A.’s best bartenders. Hungry Cat not only brought out the uni shooters, but had a refreshment ready in the form of carrot juice, ginger and lemon with candied ginger garnish. And who would’ve guessed that America’s Best Cocktail Bar, The Varnish, would dirty it up by luging Brugal 1888 down a huge ice block? (We became fast friends with everyone in attendance thanks to the shared-lip luge exit at the end.) Rye on the Road (San Francisco) brought forth a heat reprieve in The Flash, made with Bluecoat American dry gin, cucumber, kiwi and lemon. Also representing were Chris Ojeda of Soho House West Hollywood, Neal Bodenheimer of CURE (New Orleans) and Steve Wildy of Vetri Restaurants (Philadelphia). In all, it was an impressive showing for an even great more impressive cause. Over $500,000 was raised for kids with cancer. You know next year will also sell out, and I’ll see you there. Be sure to sign up for the update!